A Canadian agency banned government workers from using the phrase "Let’s go Brandon," a chant used to mock President Joe Biden, according to a letter being passed around on the internet. The only problem: The letter is fake.

The alleged memo was formatted as a "formal notification" sent by Shared Services Canada, an agency for government technology support. It said that government workers who used the "Let’s go Brandon" slogan risked being fired "without recourse or labour union representation."

"The uses of colloquialism or sayings with intended double meaning or offense are strictly prohibited in all means of correspondence or communication," it said. "Specifically, the use of the wording ‘let’s go Brandon’ and any variation thereof under any circumstance is banned." 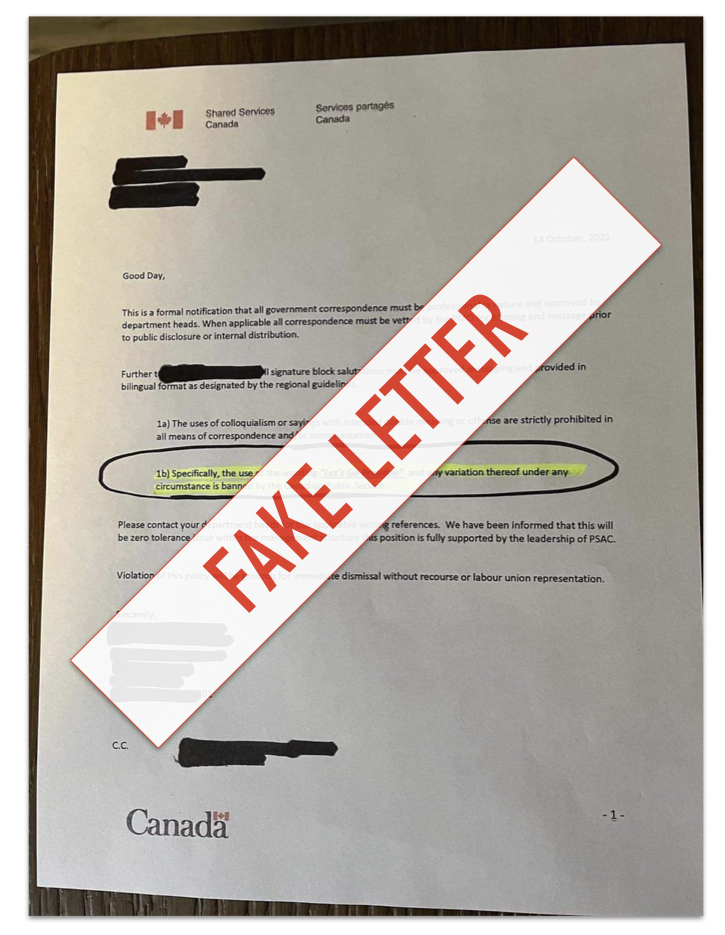 Viral image
stated on January 6, 2023 in a Facebook post
Coronavirus is a Latin word for “heart attack virus.”

Several elements of the letter should have given that away, according to the National Post, a Canadian news outlet, and AFP Fact Check. The letter included one sentence that was missing punctuation, and the letterhead was placed in a different position on the paper than on most other government communications.

The fabricated letter appeared to originate with an anonymous Twitter account that posted it on Oct. 17 and claimed it came "from a Canadian friend," the National Post reported.

It spread further after it was shared by Peter McCaffrey, the president of a libertarian think tank in Alberta, Canada, in a tweet that received over 14,500 likes and 4,700 retweets.

The memo also circulated in stories from conservative websites like the Daily Wire, as well as on Facebook and Instagram, where it was flagged as part of Facebook’s efforts to combat false news and misinformation on its News Feed. (Read more about our partnership with Facebook.)

McCaffrey acknowledged in a follow-up tweet the next day that the letter was "not genuine," but the second tweet got far less engagement than the original. Twitter also started marking posts sharing the letter as "manipulated media," with a link to several fact-checks debunking it.

We mark this statement Pants on Fire!