Facebook posts
stated on January 25, 2021 in an image:
Says Joe Biden is “following through with a fracking ban.”

President Joe Biden signs an executive order on climate change, in the State Dining Room of the White House on Jan. 27, 2021, in Washington. (AP)

A Jan. 25 post on Facebook juxtaposes two news articles: one from the Washington Post and one from Townhall, a conservative news site. The former article says Biden won’t ban fracking, while the latter says he "followed through" with a ban.

Throughout the 2020 presidential election, we fact-checked many claims that Biden would ban fracking, a process used to extract oil and gas from the ground. Several of them misrepresented his position, so we wanted to take a closer look at this post. 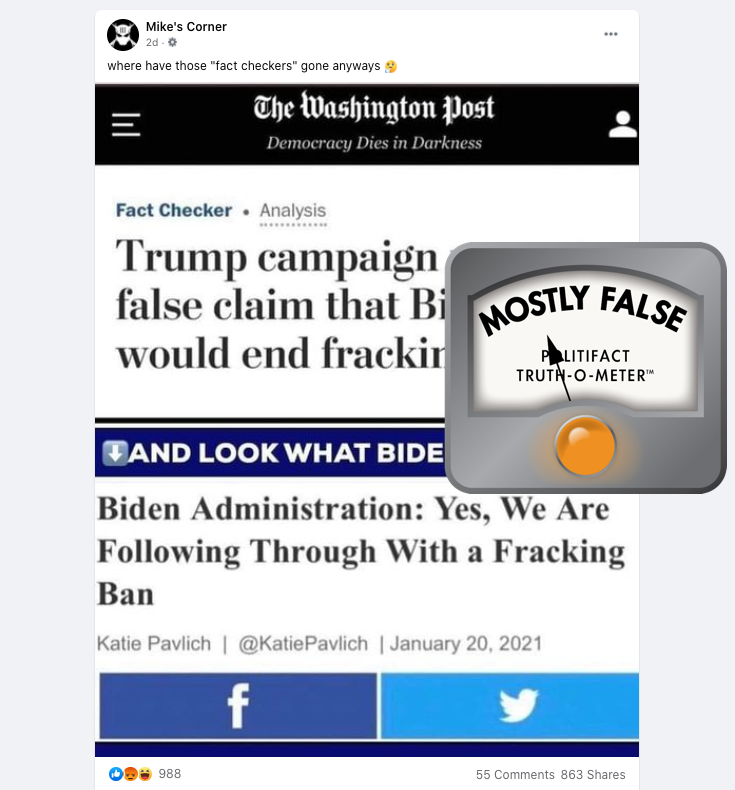 We found that it, too, distorts Biden’s actions by making them appear more sweeping than they really are. In short, Biden is doing what he said he would do if elected — that is, ban new fracking on federal land.

The top of it shows the headline of a Washington Post fact-check published in early October. It debunked a Trump campaign ad that said, if elected president, Biden said he will end fracking. The headline: "Trump campaign promotes false claim that Biden would end fracking."

The second article in the Facebook post purportedly shows "what Biden is doing," and was published by Town Hall on Jan. 20. Its headline said: "Biden Administration: Yes, We Are Following Through With a Fracking Ban."

The Townhall article covers an interaction at the first press briefing of the Biden administration. (The article more accurately explains the type of fracking that Biden promised to block.)

On Jan. 20, White House press secretary Jen Psaki answered a reporter’s question about the executive order that Biden signed that day about Alaska oil and gas drilling. Here’s the exchange, in context:

Reporter: "President Biden promised to end all new oil and gas leasing on federal lands when he was a candidate. The order that you just mentioned that he signed today was much narrower than that — it's a temporary moratorium and it only applies to (the Arctic National Wildlife Refuge). And there is some debate about whether he has the legal flexibility to even follow through with his full promise. Does the administration still have that commitment today?

Psaki: "We do, and the leases will be reviewed by our team. We just have only been in office for less than a day now"

What Biden signed was an executive order that paused the federal government’s implementation of the Coastal Plain Oil and Gas Leasing Program in the Arctic National Wildlife Refuge. The Trump-era program, passed as part of the Tax Cuts and Jobs Act of 2017, directed the Interior Department to issue leases for drilling oil and natural gas in the refuge’s coastal plain. Biden’s order also reinstated an Obama-era policy that withdrew certain areas of the Arctic from consideration for oil drilling.

"The Secretary (of the Interior) shall review the program and, as appropriate and consistent with applicable law, conduct a new, comprehensive analysis of the potential environmental impacts of the oil and gas program," Biden’s executive order says.

Biden’s move tracked with his climate change plan, which calls for banning fracking on federal lands but not all fracking.

On Jan. 27 — after the Facebook post and Townhall article were published — Biden signed an additional executive order that directs the interior secretary to "pause new oil and natural gas leases on public lands or in offshore waters pending completion of a comprehensive review." It would effectively prevent new fracking projects on federal land.

The Interior Department said the order "does not impact existing operations or permits for valid, existing leases, which are continuing to be reviewed and approved." Biden reiterated that point in remarks to the press.

"Let me be clear, and I know this always comes up: We're not going to ban fracking," he said.

That’s not quite right.

Biden has signed two executive orders related to land leases for oil and natural gas drilling. One order pauses new leases specifically in the Arctic National Wildlife Refuge, while the other pauses new leases on all federal land. Neither ban existing fracking operations, and Biden has said repeatedly that he does not intend to do so.

The Facebook post contains an element of truth but ignores critical facts that would give a different impression. We rate it Mostly False.

JoeBiden.com, THE BIDEN PLAN FOR A CLEAN ENERGY REVOLUTION AND ENVIRONMENTAL JUSTICE

Townhall, "Biden Administration: Yes, We Are Following Through With a Fracking Ban," Jan. 20, 2021

The White House, "Executive Order on Tackling the Climate Crisis at Home and Abroad," Jan. 27, 2021