House Speaker Nancy Pelosi of Calif., displays the signed article of impeachment against President Donald Trump before transmission to the Senate on Jan. 13, 2021. (AP)

Throughout former President Donald Trump’s second impeachment trial, some Facebook users speculated that it was a waste of taxpayer money.

"Boy, that 33 Million that was spent on the impeachment sure would help a bunch of small businesses right now…" said a Feb. 11 text post.

The Democratic-controlled House introduced the article of impeachment on Jan. 11 and passed it two days later, charging Trump with "incitement of insurrection" after his supporters stormed the U.S. Capitol while Congress counted electoral votes. On Feb. 13, after a five-day trial, the Senate acquitted Trump.

Trump was the only president to be impeached twice, and claims about the costs also arose during his previous impeachment in late 2019. At the time, we rated False a claim that the monthslong process — which culminated in an acquittal in January 2020 — cost taxpayers $40 million. So we wanted to look into these posts, too. 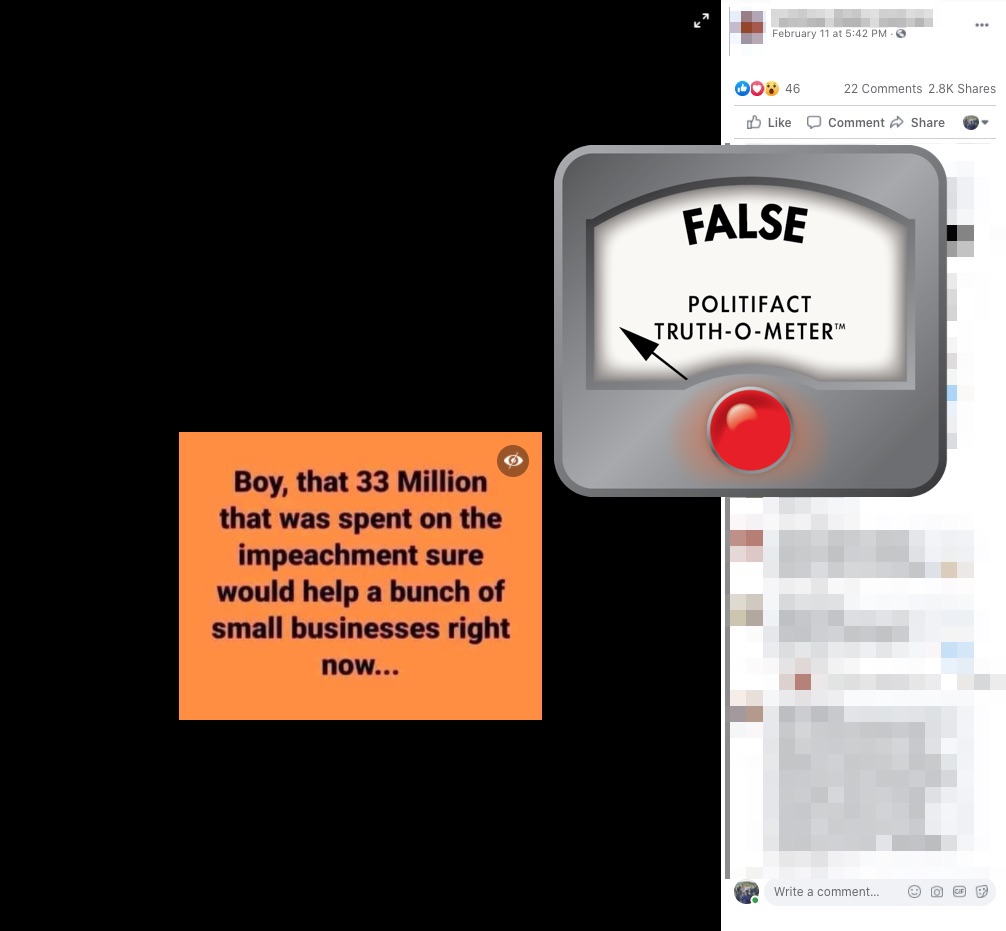 "It’s hard to pinpoint exactly how much the impeachment cost," said Steve Ellis, president of the nonprofit Taxpayers for Common Sense. "But I sincerely doubt it was anywhere close to $33 million."

The $33 million figure appears to stem from a report about former Special Counsel Robert Mueller’s two-year investigation into allegations of Russian interference in the 2016 election.

Expenditure filings from May 2017 to 2019 put the cost of Muller’s investigation at around $32 million. However, that number didn’t account for forfeitures made by people ensnared in the probe or the fact that indirect expenses like pay for FBI personnel didn’t cost additional tax dollars. Mueller’s findings were not part of either impeachment.

An accurate estimate for Trump’s first impeachment could inform the cost of his second, but concrete numbers are hard to come by.

The Congressional Budget Office did not receive a cost estimate for the first impeachment against Trump. A February 2020 bill that called for the Government Accountability Office to conduct an audit of costs associated with the inquiry did not pass the House.

A December 2019 report from the House Judiciary Committee that accompanied the articles of impeachment said the resolution "does not provide new budgetary authority or increased tax expenditures."

"Additionally, the committee believes that the resolution will have no budget effect," the report said.

One way that some media outlets and think tanks have tried to estimate the cost of the first impeachment inquiry is to add up the salaries of staffers on the relevant committees. But those aren’t official estimates — and the salaries of congressional staffers aren’t impacted by impeachment.

"The lawmakers and their staff are sunk costs. Taxpayers are paying their salary regardless," Ellis said. "You could argue opportunity cost — what’s not getting done because of impeachment. But there’s no dollar figure on that."

Tax policy experts told PolitiFact there isn’t a concrete estimate for how much Trump’s second impeachment cost taxpayers. But given the fact that it lasted only a few weeks, it probably wasn’t much.

"I’m not aware of any reputable cost estimates on the impeachment trial, and I’m skeptical that an accurate estimate could be made," said Matt Gardner, senior fellow at the Institute on Taxation and Economic Policy.

As with Trump’s first impeachment, the CBO does not have a cost estimate associated with the House’s impeachment proceedings. We could not find any other official estimate of the trial’s cost to taxpayers.

What were the potential expenses?

Putting aside lawmaker salaries, let’s take a look at some of the potential costs of the second impeachment. First up: legal bills.

The House Judiciary Committee announced Jan. 15 that it hired two lawyers "on a consulting basis" for the trial. "That would come out of already appropriated funds to congressional operations," Ellis said.

Another potential cost is travel expenses for witnesses. During the first impeachment, ambassadors flew to Washington from overseas to testify before Congress. But during Trump’s second impeachment, no witnesses were called.

That’s wrong. There is no concrete estimate for Trump’s second impeachment, which lasted just a few weeks.

The $33 million figure appears to be based on an incomplete and inaccurate reporting of the cost of the Mueller investigation, which was not related to either of Trump’s impeachments. The CBO does not have cost estimates for the impeachment resolutions, and the House Judiciary Committee said the first inquiry had no effect on taxpayers. Experts say congressional salaries and other institutional costs are built into the budget.

Email interview with Matt Gardner, senior fellow at the Institute on Taxation and Economic Policy, Feb. 17, 2021

The Washington Post, "Trump acquitted by minority of Senate on charge of inciting Jan. 6 riot at Capitol," Feb. 13, 2021