Supporters of President Donald Trump stormed the U.S. Capitol and were photographed outside the Senate Chamber on Jan. 6, 2021 in Washington. (AP/Balce Ceneta)

Hours after supporters of President Donald Trump stormed the U.S. Capitol, several of his allies in Congress and the media baselessly claimed anti-fascist provacateurs were to blame for the violence.

Some suggested, without evidence, that the crowd backing Trump’s efforts to overturn the election was infiltrated by antifa. Antifa stands for "anti-fascist," and it is not a group but a broad coalition of activists.

Others focused on specific protesters who forced their way inside the Capitol and were shown in photographs, such as a bare-chested man who wore face paint and a horned fur cap.

"These are NOT Trump supporters," said one Jan. 6 Facebook post. "Antifa THUGS." The post was flagged as part of Facebook’s efforts to combat false news and misinformation on its News Feed. (Read more about our partnership with Facebook.)

But the mysterious man in horns is not antifa-aligned. The man, Jake Angeli, supports Trump and is a well-known supporter of the baseless QAnon conspiracy theory. He goes by the moniker, "Q Shaman," and he told the Arizona Republic he uses his unique outfit to stand out.

Poynter reported that in December, Angeli launched an online crowdfunding campaign to fund his participation in pro-Trump events.

The Arizona Republic described him as "a QAnon supporter who has been a fixture at Arizona right-wing political rallies over the past year." The Associated Press reported that he was also seen in the same signature headwear at a pro-Trump rally Nov. 7 in Phoenix. 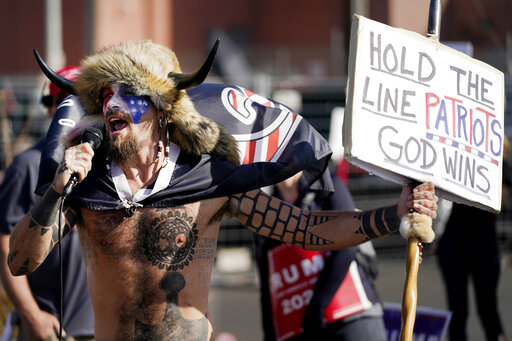 Jake Angeli speaks at a rally outside the Maricopa County Recorder's Office on Nov. 7, 2020, in Phoenix. (AP)

PolitiFact’s review of Angeli’s private Facebook page showed photos and posts that indicated support for QAnon and Trump. (Followers of QAnon believe Trump is leading a fight against a global cabal of Satan-worshipping pedophiles.)

False claims linking Angeli and other people who mobbed the Capitol to antifa took off online in the hours after the event. An NBC News analysis identified thousands of tweets that accused antifa members of "posing" as Trump supporters.

Angeli responded on Twitter when Lin Wood, an attorney who has filed lawsuits seeking to overturn the presidential election, posted photos of Angeli and claimed he is an antifa activist. The Daily Beast’s Will Sommer, who covers QAnon closely, highlighted the exchange.

"Mr. Wood. I am not antifa or blm," Angeli’s tweet said. "I'm a Qanon & digital soldier. My name is Jake & I marched with the police & fought against BLM & ANTIFA in PHX."

There remains no credible evidence that the Trump supporters who stormed the U.S. Capitol were antifa activists. Video and photos from the scene show many people wearing and waving Trump-branded paraphernalia and flags.

Trump spoke to a rally of supporters in Washington hours before the violence erupted, and he had urged them to come to the city on Jan. 6 and back his efforts to overturn the election. He encouraged the rally to march to Congress and suggested he’d join them. He did not.

A Facebook post said a man who was photographed storming the U.S. Capitol in a horned fur cap is an "Antifa thug." The man is a known QAnon supporter who has backed Trump.

RELATED: A day of crisis at the US Capitol, fact-checked

RELATED: Is this a coup? Here’s some history and context to help you decide

Poynter, "A man wearing a buffalo cap proves how far mis/disinformation can go and how dangerous it can be," Jan. 6, 2021

The Dispatch, "Were Antifa Supporters Among Those Who Overtook the Capitol Building?" Jan. 6, 2021

Lead Stories, "Fact Check: Tattooed Man Wearing Horns Storming The Capitol Is NOT Antifa/Pedophile -- He Is A QAnon/Trump Supporter," Jan. 6, 2021

Buzzfeed News, "The Rioters Who Took Over The Capitol Have Been Planning Online In The Open For Weeks," Jan. 6, 2021

Vox News, "The far right is falsely blaming antifa for the pro-Trump insurrection on Capitol Hill,"