Facebook posts
stated on February 4, 2021 in an image:
Photo shows Democratic protesters who “stormed the U.S. Capitol in 2018.”

Donald Trump supporters breached the U.S. Capitol on Jan. 6 in a violent insurrection against the federal government. But some Facebook users accused Democrats of a similar uprising in 2018.

On Feb. 4, Ted Nugent, a singer-songwriter and conservative activist, shared a photo of people crowded into a rotunda.

"Remember when Democrat protesters stormed the U.S. Capitol in 2018, took over the U.S. Senate building, and tried to get into the U.S. Supreme Court during the (Brett) Kavanaugh confirmations?" says text in the image. "Democrat legislators and the MSM cheered it on. If it wasn’t for double standards liberals would have no standards at all." 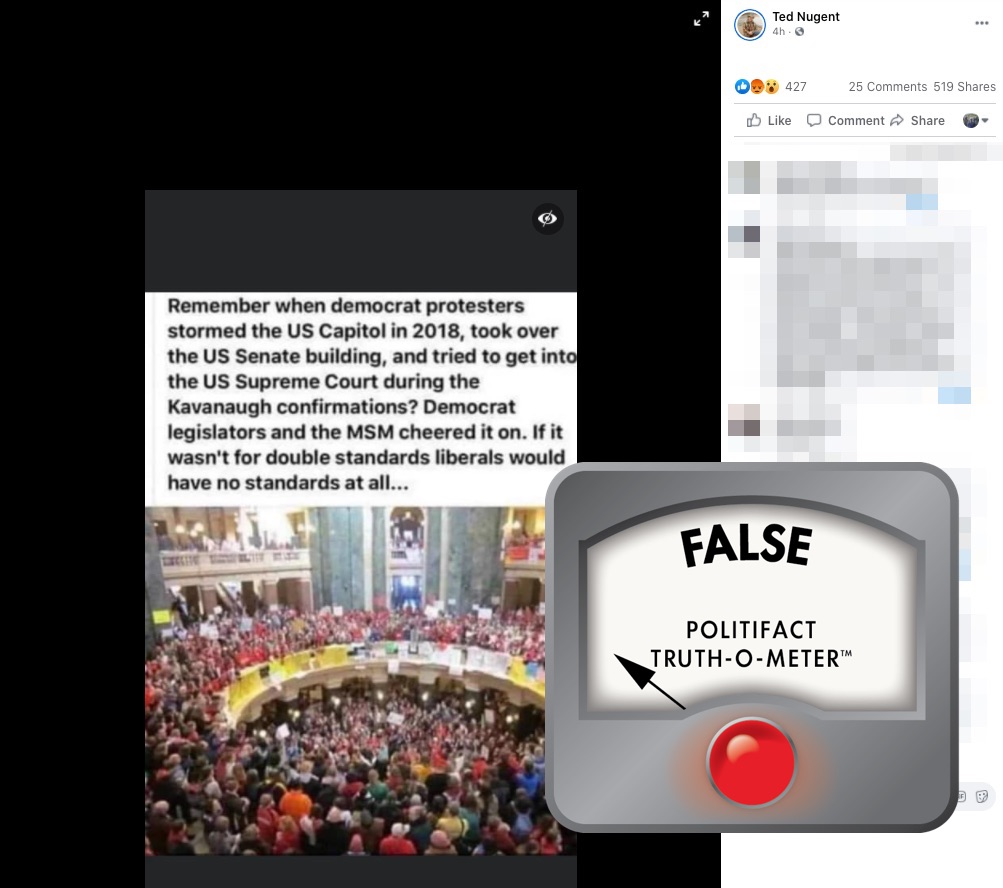 This post was flagged as part of Facebook’s efforts to combat false news and misinformation on its News Feed. (Read more about our partnership with Facebook.) The meme has been shared in dozens of other public Facebook posts, according to CrowdTangle, a social media insights tool.

There were demonstrations at the U.S. Capitol and nearby buildings during the Kavanaugh hearings, which drew protests after the nominee was accused of sexual assault.

But the photo Nugent posted doesn’t show that. It shows protesters in the Wisconsin state capitol building nearly a decade ago.

In mid-February 2011, tens of thousands of demonstrators protested in Madison, Wis., against Republican legislation aimed at removing the collective bargaining rights of an estimated 300,000 workers. Many crowded into the capitol building itself and, by Feb. 20, 2011, some demonstrators had begun a physical occupation of the building.

The photo in Nugent’s Facebook post is similar to one taken Feb. 18, 2011, by Mary Bottari of the Center for Media and Democracy, a liberal nonprofit organization. It shows protesters crowded onto three floors in the Wisconsin Capitol rotunda. Unlike the Jan. 6 insurrection at the U.S. Capitol, the 2011 protests were largely peaceful.

Watch more footage of the demonstrations below:

In 2018, hundreds of people protesting Kavanaugh’s confirmation were arrested after gathering in Senate buildings and galleries, including the Russell Senate Office Building rotunda. Others were charged with "crowding, obstructing, or incommoding" the East Front steps of the Capitol building.

But a photo Nugent relies on to show that Democrats "stormed" the U.S. Capitol doesn’t show any of that.

We rate it False.

Milwaukee Journal Sentinel, "Some are comparing the U.S. Capitol riot to Wisconsin's Act 10 protests in 2011. Here are the key differences." Jan. 8, 2021

The New York Times, "How a Presidential Rally Turned Into a Capitol Rampage," Jan. 12, 2021