Facebook posts
stated on November 17, 2020 in a Live video:
“The MOB in PA was HIRED by the Biden team to create fake ballots by the thousands!!”

If you’ve seen a post that claims Joe Biden hired the Philadelphia mob to rig the presidential election results, you should forget about it.

In a Nov. 17 Facebook post, Jeremy Herrell, a Donald Trump supporter and hip-hop artist who runs a popular conservative page whose handle is @TheHipHopPatriot, said Biden hired the mob to "crate (sic) fake ballots by the thousands."

Actually, you can — the claim is baseless.

Herrell’s video was flagged as part of Facebook’s efforts to combat false news and misinformation on its News Feed. (Read more about our partnership with Facebook.) It has more than 176,000 views. 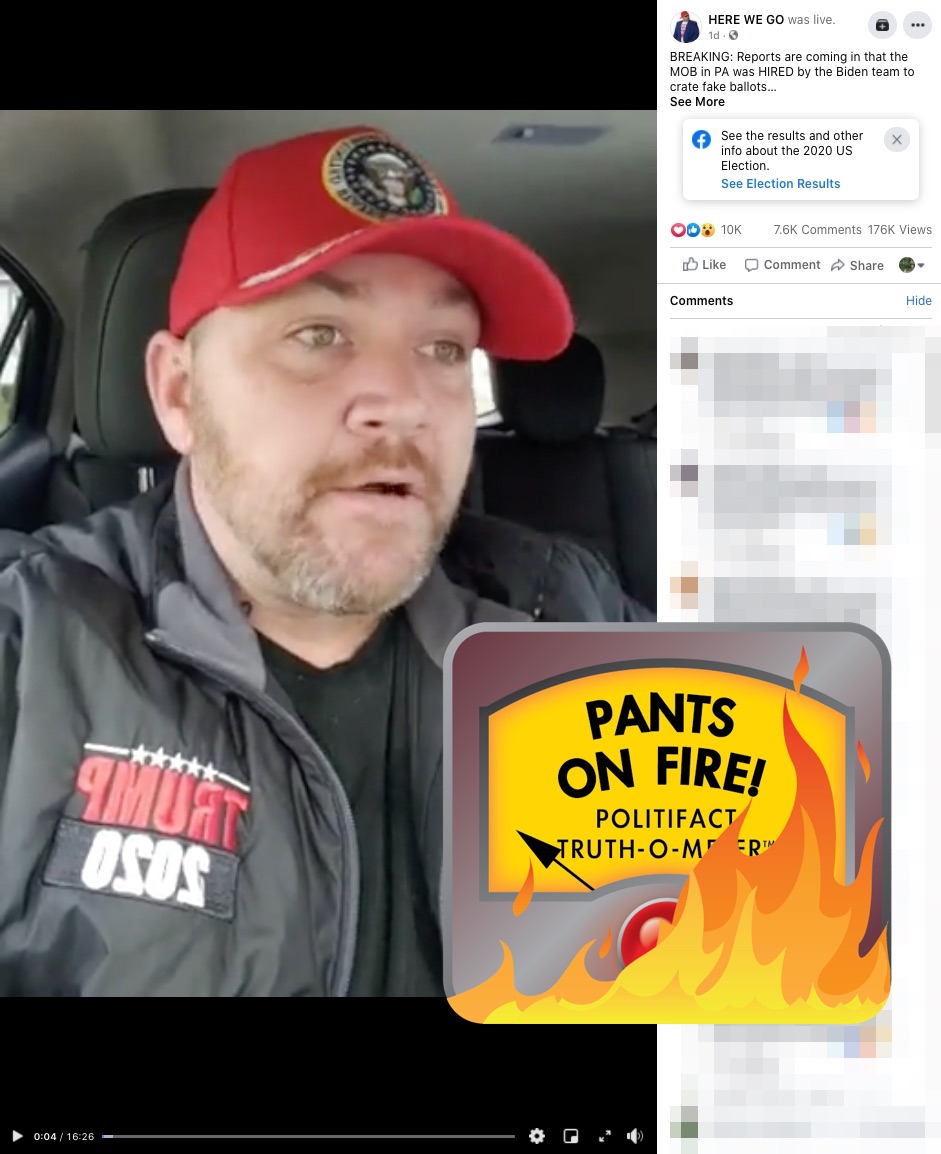 We reached out to his page for a comment, but we haven’t heard back.

During his video, Herrell cites a Nov. 14 report from the Buffalo Chronicle with the headline: "How a Philly mob boss stole the election — and why he may flip on Joe Biden." The Buffalo Chronicle website is owned by businessman Matthew Ricchiazzi. It has published false claims about prospective members of the Biden administration, Canadian politics and New York’s response to COVID-19.

This new Buffalo Chronicle article cites anonymous sources to say the Biden campaign paid $3 million to "Skinny Joey" Merlino, a reputed mafia veteran in Philadelphia, and Merlino’s associates to fabricate 300,000 ballots in the battleground state. On Election Night, the site claims, Merlino and his team were creating 6,000 fraudulent ballots per hour.

"They were then packaged into non-descript cardboard boxes and dropped off outside the Philadelphia Convention Center," the article says. "The ballots were purchased in cash."

The Buffalo Chronicle wrote that Merlino "might just be willing to flip on Biden" if Trump expunges his criminal record. Merlino would "really like a job with the National Parks Service," according to the site’s anonymous source.

There is no evidence the Biden campaign hired a mob boss to fabricate hundreds of thousands of ballots in Pennsylvania. The article plays into other baseless claims that widespread voter fraud in battleground states affected the outcome of the presidential race.

On Nov. 16, the Buffalo Chronicle story was shared on Twitter by attorney Jordan Sekulow, who — along with his father Jay Sekulow — is a member of Trump’s legal team. The Sekulows have helped the president mount legal challenges in battleground states over the election results.

"This is being reported by the Buffalo Chronicle," Herrell said in his video. "And it is verified by Jordan Sekulow."

Jordan Sekulow shared the link and said "follow all leads." Meanwhile, Rudy Giuliani, Trump’s personal lawyer who recently falsely claimed there were hundreds of thousands of "unlawful votes" in Philadelphia and Pittsburgh, told Fox Business the allegation was "far-fetched."

We reached out to the Buffalo Chronicle for a comment, but we haven’t heard back.

There is no evidence of widespread voter fraud in Philadelphia — and certainly not hundreds of thousands of fabricated ballots favoring Biden.

"We just had the most transparent and secure election in the history of Philadelphia," said Philadelphia City Commissioner Al Schmidt, a Republican who sits on the city’s elections board, in a Nov. 11 interview with CNN. "I have seen the most fantastical things on social media, making completely ridiculous allegations that have no basis in fact at all."

In a Nov. 12 statement, a committee made up of U.S. Cybersecurity and Infrastructure Security Agency officials and its election partners said that, nationwide, this election was "the most secure in American history."

RELATED: How we know Joe Biden won the 2020 presidential race

"There is no evidence that any voting system deleted or lost votes, changed votes, or was in any way compromised," the agency wrote. "While we know there are many unfounded claims and opportunities for misinformation about the process of our elections, we can assure you we have the utmost confidence in the security and integrity of our elections, and you should too."

As for Merlino, the purported mob boss has been on supervised release in South Florida since 2018, when he took a plea deal in a racketeering and conspiracy case. During his most recent trial, Merlino said he had retired from the mob and was focused on running an upscale Italian restaurant in Boca Raton, Fla.

Merlino’s lawyer denied his client was part of any voter fraud scheme in Pennsylvania.

"My client categorically denies all the allegations and Joey would rather die than ever be a snitch," John Meringolo told the New York Daily News.

We reached out to the Biden transition team for a comment, but we haven’t heard back.

The Buffalo Chronicle, "EXCLUSIVE: How a Philly mob boss stole the election — and why he may flip on Joe Biden," Nov. 14, 2020

PolitiFact, "How online misinformation unfolded after Election Day, boosted by Trump and his allies," Nov. 6, 2020