Facebook posts
stated on February 21, 2020 in an image:
"There is a group going to homes and pretending to be officials from home affairs. They have documents with the letterhead Department of Home Affairs and claim to be confirming that everyone has a valid ID for the upcoming census. They are robbing homes."

Weeks before millions of Americans will be asked to complete the 2020 Census, a hoax about the count has started to resurface online — and it comes from overseas.

One Facebook post, which was published in a Baltic, Conn., community group Feb. 21, offers an ominous warning for those looking to participate in the Census, which will begin outside Alaska in mid-March. The post includes an image of what looks like a typed notice from the Triangle Park Neighborhood Association.

"Be warned, there is a group going to homes and pretending to be officials from home affairs," the post reads. "They have documents with the letterhead Department of Home Affairs and claim to be confirming that everyone has a valid ID for the upcoming census. They are robbing homes."

The post was flagged as part of Facebook’s efforts to combat false news and misinformation on its News Feed. (Read more about our partnership with Facebook.) It has been shared hundreds of times in several different groups. 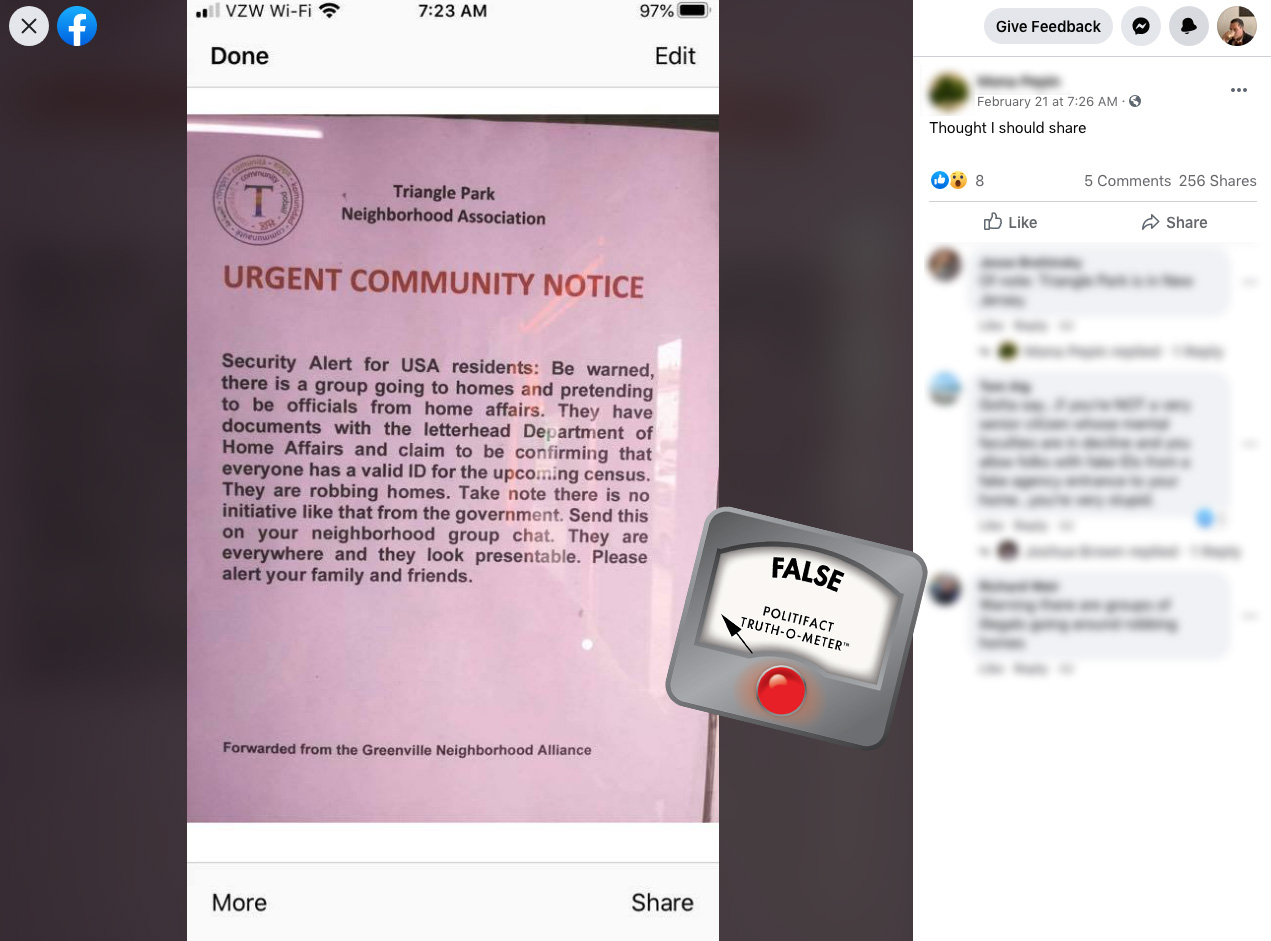 But the post isn’t original — it’s adapted from an old warning issued by South African officials.

In October 2017, the South Africa Department of Home Affairs published a warning about groups posing as election officials that were going door to door pretending to check IDs. Once the groups entered people’s homes, they would rob them.

In April 2019, the department tweeted a similar statement. The phrasing is almost identical to the Facebook post.

In South Africa, the Department of Home Affairs is responsible for immigration and civic services, such as travel documents and citizenship records. There is no such department in the United States. Additionally, the Triangle Park Neighborhood Association is in the Greenville neighborhood of Jersey City, N.J., not Connecticut.

According to the U.S. Census Bureau, there are three ways the agency conducts its decennial count: online, by phone and by mail. By April 1, all Americans should receive an invitation to participate in the survey. If the agency doesn’t hear back by May, it will start following up with households in person.

The Census Bureau has debunked the "Home Affairs" hoax. While the agency does have employees in neighborhoods across the country, the census takers do not ask residents for identification. They are focused on whether the address is correct. They also carry badges and briefcases that indicate they work for the Census Bureau.

Different versions of the Facebook hoax have been circulating online for several years. It’s an example of a "zombie claim" — a falsehood that never dies.

We found similar posts in community groups in New York, Tennessee, Illinois and South Carolina, as well as India, the U.S. Virgin Islands and the United Kingdom. News outlets spanning from Texas to Malaysia have debunked it.

Tweet from the South Africa Department of Home Affairs, April 3, 2019

U.S. Census Bureau, "Are People Posing as ‘Department of Home Affairs’ Workers and Checking IDs for the Census?" accessed Feb. 25, 2020