A popular social media hoax is trying to link about a dozen chain restaurants to President Donald Trump’s re-election campaign.

According to the rumor, which has been shared widely on social media platforms, businesses like In-N-Out, Taco Bell and Olive Garden are supporting the president in the 2020 presidential election. The photo lists 12 such companies.

"Not much of a fast food eater but just in case I get a craving this is motivation to eat healthier for sure!" one Instagram caption reads. 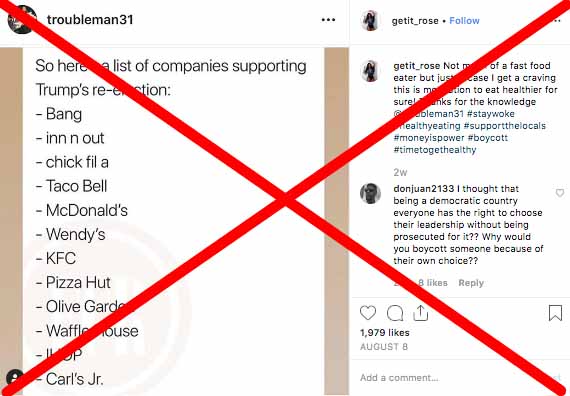 This post was flagged as part of Facebook’s efforts to combat false news and misinformation on its News Feed. (Read more about our partnership with Facebook, Instagram’s parent company.)

The Washington Post wrote about this fast food rumor Aug. 9 after a college student’s tweet of the list went viral. It amassed nearly 250,000 retweets, helped partially by a quote tweet from Chrissy Teigen, a model and TV personality.

"So if you see me starting to get thinner and toned don’t ask me why," the original tweet reads.

In a reply to his original tweet, the original poster, whose real name is Zuriel Sanders, linked to five webpages as evidence. None of them back up his claim that 12 restaurants are directly supporting Trump in 2020.

Two links are from the Center for Responsive Politics, a nonprofit group that tracks political donations.

The first shows that Chick-Fil-A employees, owners or their family members donated $36,530 to candidates during the 2016 election, with the bulk of the money going to Republicans. But that’s money from the last election cycle, it went to all national politicians (not just Trump) and, as a note on the website states, none of that money was donated by the company itself.

The second link shows the top contributors in the food and beverage industry to candidates in 2019-2020. McDonald’s Corp. tops the list with $238,220, the majority of which has gone to Republicans. Waffle House, Inc. also made the top 10 with $68,950 going to Republicans and other conservatives.

McDonald’s did not respond to our request for comment. But a closer look at the company’s political contributions show that there’s no evidence to suggest it’s directly supporting Trump in 2020.

RELATED: Does a portion of every Bang energy drink purchase go to Trump re-election efforts? Not exactly

The Center for Responsive Politics does not have data to indicate that individuals and PACs associated with the company have donated to Trump so far this election cycle. Numbers from the 2016 election show that Hillary Clinton was the candidate with the most single contributions.

What the data do show about 2020 contributions is that the McDonald’s PAC has contributed $98,500 to federal candidates so far, with the lion’s share going to Republicans. None has gone to Trump so far, according to the Center’s data.

We looked at political contributions from the other 10 companies, and their associated PACs, listed in the Instagram post. We found that only one of them, Taco Bell’s TACO PAC, supported Trump in 2016. And only a PAC affiliated with Vital Pharmaceuticals, the company that owns the energy drink Bang, has contributed money to Trump’s 2020 re-election, as we noted in a previous fact check.

Finally, Trump isn’t the top recipient of money from the food and beverage industry so far. Sen. Kamala Harris, D-Calif., is.

The other three links the original tweeter included as evidence for his claim are three news stories. They speak to the political leanings of fast food restaurants’ owners and operators, but they don’t prove the claim that 12 companies are supporting Trump in 2020.

The first link is to an article from a site called The Cheat Sheet. It claims to reveal the political leanings behind several popular restaurant chains.

Chick-Fil-A, Pizza Hut, Waffle House, KFC, McDonald’s, Wendy’s and IHOP are conservative, the site says. As evidence, the article points to news reports about each company’s past political contributions, which have mostly gone to Republican candidates. But those stories don’t mention the companies’ PACs contributing to Trump directly.

A 2016 Eater story cited by the Cheat Sheet even says so:

"Restaurant PACs — at least those on Eater’s list — aren’t donating to Clinton or Trump. Instead, PACs tend to work for the best interests of the company as a whole," reads the story, which analyzed political contributions from PACs supported by Wendy’s, Chick-Fil-A and Yum! Brands (which owns Taco Bell, KFC and Pizza Hut), among others. 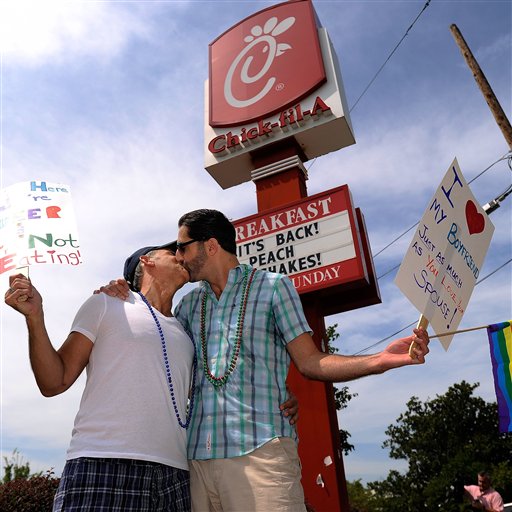 The second news link the tweeter shared comes from Food & Wine. It reported in 2016 that TACO PAC had "maxed out its giving to the Trump campaign."

As evidence, the article cited data from the Center for Responsive Politics. They show that TACO PAC gave $5,000 to the Trump campaign during the 2016 election cycle. That PAC has not contributed any money to federal candidates so far this cycle.

That article points to other media accounts and interviews with the company’s founders and executives that elucidate their views. For example, Salon wrote about how Chick-Fil-A President Dan Cathy has spoken out in support of the "traditional family" and operating by "biblical principles," which echo conservative values.

But none of the stories cited prove that the companies in question are directly supporting Trump’s 2020 campaign.

PolitiFact reached out to each of the companies listed in the original tweet, save Bang, which we fact-checked before.

We rated as Mostly False the claim that the energy drink company gives a portion of each energy drink sale to Trump’s campaign. But the fact-check noted that Bang’s leaders have been outspoken in support of Trump and Bang’s parent company did make a donation to a pro-Trump super PAC this year.

Of the 11 companies we contacted, six responded. Here’s what they told us:

Chick-Fil-A: "Chick-Fil-A does not make political contributions. We don’t contribute to a (political action committee)."

IHOP: "We’re about pancakes, not politics. IHOP as a brand is not involved in providing financial support to either side of the aisle."

In-N-Out: "At In-N-Out Burger, we have always taken pride in providing the freshest, highest quality food to all of our customers regardless of political party and, as such, we do not take a position on, nor support, individual political candidates."

Olive Garden: "We don’t know where this information came from, but it is incorrect. Our company does not donate to presidential candidates."

Pizza Hut: "Pizza Hut does not make donations to presidential political campaigns, and we do not endorse any political parties or candidates. Pizza Hut has no involvement with or control over donations made by our franchisees, who are independent business owners and, like all Americans, are free to donate to or support whomever they wish."

Taco Bell: "Taco Bell Corp. does not make donations to presidential political campaigns and has no involvement with or control over donations made by franchisees. Our franchisees are independent business people and, like all Americans, are free to donate to or support whomever they wish."

While it’s true that most of the companies named in the Instagram post have contributed money to PACs in the past, including those that mostly support Republicans, we found no evidence that all of them have donated or endorsed 2020 candidates directly. Only Bang’s parent company has contributed to a pro-Trump PAC so far.

Campaign contribution data show that, while many of their employees and affiliates give money to Republican candidates, none of the companies mentioned have donated to Trump’s re-election effort directly. One company is associated with a PAC that gave to the president in 2016, and one is associated with a PAC that has given to Trump during this election cycle. News stories speak to the companies’ political views and past contributions, but they don’t prove support for Trump. Six companies denied making direct political contributions and/or endorsing presidential candidates.

The post is not accurate. We rate it False.

The Cheat Sheet, "The Secrets Behind Which Chain Restaurants Support Liberal or Conservative Views, Revealed," Jan. 22, 2018

PolitiFact, "Does a portion of every Bang energy drink purchase go to Trump re-election efforts? Not exactly," Aug. 13, 2019