If you watched more than an inning of the 2017 World Series, you probably saw an unusual ad from the re-election campaign of Gov. Bruce Rauner.

Rauner doesn’t appear in the ad. Instead, Missouri Gov. Eric Greitens, Wisconsin Gov. Scott Walker and Indiana Gov. Eric Holcomb, all Republicans, look into the camera and boast of their states’ economic gains, which they attribute to policies enacted by Madigan ("raising Illinois’ taxes," says Walker) or prevented by him ("blocking Rauner’s reforms," says Greitens).

The most specific claim comes from Holcomb of Indiana: "We’re growing union jobs faster than Illinois."

Given Indiana’s status as a "right-to-work" state that bans compulsory union membership and Illinois’ status as one of the most union-friendly states in the nation, Holcomb’s statement invites a closer look.

The Rauner campaign said Holcomb’s claim is based on a U.S. Bureau of Labor Statistics report from January 2017 on union employment and membership.

The difference between the two states is all the more striking when considered against Illinois’ longstanding reputation as a union stronghold. The report notes that Illinois is among a handful of states that account for most of the union membership in the nation:

Over half of the 14.6 million union members in the U.S. lived in just 7 states (California, 2.6 million; New York, 1.9 million; Illinois, 0.8 million; Pennsylvania, 0.7 million; and Michigan, New Jersey, and Ohio, 0.6 million each), though these states accounted for only about one-third of wage and salary employment nationally.

Illinois’ 2015-16 union numbers are no statistical fluke. Even before the Great Recession, Illinois had been losing union jobs at a faster clip than its neighbor to the east.

"In 2006-07, in the wake of the very difficult manufacturing employment period, Illinois and Indiana shed both public and private union jobs," Hicks said in an email. "But Indiana was holding on better, when it should not have because we are a more manufacturing intensive state (and private sector unions are more tied to manufacturing)."

Greater Chicago’s large and diverse economy should have provided a buffer for the state’s overall jobs picture, but that hasn’t happened, Hicks said.

"In the most recent data, Indiana is well outperforming Illinois in both private and public sector union job growth. Given the very large agglomeration economy that is Chicago, this should not be the case," Hicks said.

Unemployment figures over the past decade also attest to Illinois’ job struggles relative to Indiana. While both hit peak unemployment in January 2010 -- Illinois at 11.2 percent, Indiana at 10.9 percent -- Indiana’s post-recession recovery has been significantly stronger. Indiana ended 2016 with 4 percent unemployment while Illinois was at 5.7 percent. The most recent figures, from September, have Indiana at 3.8 percent and Illinois at 5 percent. 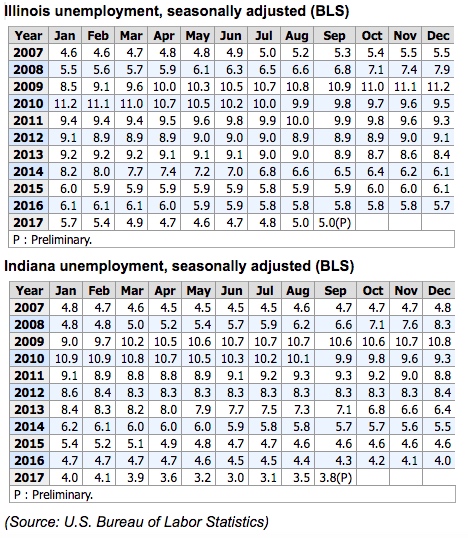 This leads to the big question about the ad: Does the speaker of the Illinois House -- who also happens to be chairman of the Democratic Party of Illinois -- deserve the thanks of Govs. Greitens, Walker and Holcomb? Have policies driven by a Democrat-led General Assembly caused Illinois’ economic woes?

Hicks is neither dismissive nor completely accepting of the governors’ claims.

"While I am not ready to say with scientific certainty that the budget and pension crises facing Illinois are the sole reason for lagging job growth," Hicks said, "the uncertainty about future tax rates and the risk of interrupted public services must surely be playing a role in Illinois’ poorer than expected economic performance in the post-recessionary period."

The latest report on union membership and representation from the U.S. Bureau of Labor Statistics backs Holcomb’s claim, with Illinois losing 5 percent of its union jobs between 2015 and 2016 and Indiana gaining 4 percent.

It’s a trend that predates the Great Recession and, in the bigger jobs picture, is backed by a decade’s worth of unemployment figures in the two states.

We rate this statement True.

Bruce Rauner
stated on December 4, 2017 a press conference:
"The candidates controlled by Madigan, all of them have said, ‘The answer to our problems is a massive income tax hike.’ "

Daniel Biss
stated on November 27, 2017 a tweet:
These guys are now pretty much living up to the @BruceRauner standard. And falling dismally short of the @MittRomney standard. Even Romney released his full tax returns.

Bruce Rauner
stated on October 20, 2017 a press conference:
"To be clear, all my investments are in a trust that I don’t control."

Rahm Emanuel
stated on October 18, 2017 a speech:
"And over the last six years, Chicago’s economy has grown faster than the economies of New York City, Washington, D.C., or the national average."

Bruce Rauner
stated on September 28, 2017 a press conference:
"I personally am pro-choice. I always have been. And I made no qualms about that when I was elected governor."

Sarah Huckabee Sanders
stated on October 2, 2017 a press conference:
"I think if you look to Chicago, where you had over 4,000 victims of gun-related crimes last year, they have the strictest gun laws in the country. That certainly hasn’t helped there."

Michael Bloomberg
stated on September 18, 2017 a website:
"The soda tax can make a difference by reducing consumption of unhealthy soda pop and sugary beverages."

Bruce Rauner
stated on September 7, 2017 in a press release:
"Even with a permanent income tax increase... the budget is more than $1 billion out of balance…"

Karen Lewis
stated on September 4, 2017 a blog post:
The new Illinois school funding formula "created a tax shelter for the wealthy and a voucher program…"

Bruce Rauner
stated on August 28, 2017 a bill signing event:
"My grandparents were proud immigrants to the United States of America, here to Illinois in the late 1800s. My grandparents did not speak English when they were young."