Karen Lewis
stated on September 4, 2017 in a blog post:
The new Illinois school funding formula "created a tax shelter for the wealthy and a voucher program…"

For many public education advocates in Illinois, Aug. 31 was a historic day. When Gov. Bruce Rauner put his signature on Senate Bill 1947, he set in motion a plan designed to end Illinois’ status as home to the most unfair school funding system in the nation.

But for the Chicago Teachers Union, the good news was tempered by the inclusion in the new plan of the Invest in Kids Act -- a five-year pilot program that will allow up to $75 million in tax credits per year for donors to scholarship funds for private elementary and high schools. This, the union says, amounts to an Illinois prototype for public funding of a private school voucher system like those in 14 states and the District of Columbia.

"Unfortunately, Illinois legislators have voted to 'reform' the worst school funding system in the country with a ticking time bomb of a voucher scheme, and the Illinois Democratic Party has crossed a line which no spin or talk of 'compromise' can ever erase," the CTU said in an Aug. 28 press release.

After Rauner signed the new formula into law, the union reiterated its opposition to the scholarship portion.

"Instead of raising revenue, the mayor and the governor have attached a parasitic voucher program to the bill to create a tax shelter that will benefit big corporations and billionaire patrons like Ken Griffin," read an Aug. 31 CTU blog post.

And as CTU President Karen Lewis welcomed members back to classrooms on Sept. 4, she prefaced her praise of the new formula with yet another condemnation of the scholarship plan as a "voucher program."

"While we’re disappointed that our lawmakers caved to right-wing ideologue Bruce Rauner and created a tax shelter for the wealthy and a voucher program, we believe the new evidence-based school funding formula is a step in the right direction—as we have always said—and brings us closer to at last adequately designating public dollars to fund the schools that Chicago’s students deserve," Lewis wrote in a blog post.

The union consistently describes the scholarship plan as a voucher program and a tax shelter that will benefit the wealthy. But is that description accurate? We took a look.

To the CTU, there is no distinction between calling the Invest in Kids Act a "scholarship" program or a "voucher" program.

Use of the term "scholarship" is merely a "scheme to get around the constitutional and public relations issues associated with vouchers," said Kurt Hilgendorf, CTU’s policy advisor.

"But make no mistake, the mechanism is functionally the same," Hilgendorf said. "Public funds are shifted to private, predominantly religious schools – in Illinois, $375 million over the next five years -- only through a series of clearinghouses in a legal fiction that creates the illusion of no state support for religion."

The "clearinghouses" to which Hilgendorf refers are "scholarship granting organizations" -- not-for-profit entities that will be sanctioned by the Illinois Department of Revenue to receive donations and distribute scholarships. Under the Illinois plan, donors will receive state income tax credit for 75 percent of their donations to scholarship funds up to $1 million. The state will grant a maximum of $75 million in scholarship tax credits per year.

But they still are tax credits, and that is an important distinction here.

"A traditional voucher program uses state funds and so it needs a state appropriation," said Josh Cunningham, who follows school choice programs nationwide for the National Conference of State Legislatures. Those programs are different than scholarship plans like the one enacted in Illinois, which Cunningham said "rely on private donations to private organizations. And in exchange for those donations the donors receive a tax credit and that's kind of the incentive to fund the program."

The terminology can be confusing. Indiana, for example, has a true voucher system called the Choice Scholarship Program. In the 2016-2017 school year, it distributed $142.2 million in private school tuition vouchers to more than 34,000 students, about 3 percent of its total statewide enrollment. But it also includes a donor-funded scholarship program that provides a 50 percent tax credit and is capped at $12.5 million in tax credits annually.

Here’s a look at the numbers from Indiana’s Choice Scholarship Program from its 2017 annual report: 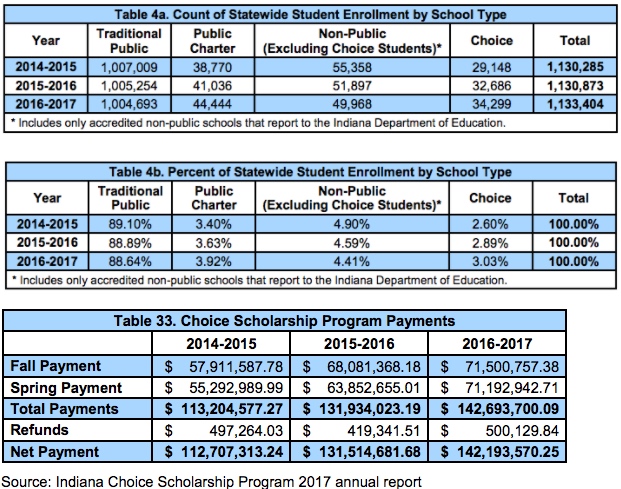 "The most simple way of differentiating between (scholarships and vouchers) is the scholarship tax credit requires individuals or corporations to donate to a scholarship granting organization…," said Robert Gilligan, executive director of the Catholic Conference of Illinois and one of the designers of the Illinois plan. "No donations, no program, no scholarship. So this relies on the goodwill of people and corporations proactively doing this."

The Catholic Conference and other school choice advocates tried in 2011 to get a true voucher program through the General Assembly and failed, Gilligan said. He believes the scholarship structure might ultimately be a better program than the one sought six years ago.

"From where I sit right now and based on conversations with my colleagues in other states, this scholarship tax credit seems to be working," Gilligan said. "It seems to be working in the states that have tried it and I think that was one of the reasons that people did take to heart and we were talking about this."

Lewis also refers to the program as a "tax shelter for the wealthy," an accusation made by CTU in the Aug. 31 post that referred to hedge fund billionaire Ken Griffin, who has donated heavily to Rauner’s campaign fund.

The plan offers a 75 percent state tax credit for any donor, with a maximum of $750,000 for those who donate $1 million. Donors will reserve their tax credits by registering on a website that will be operated by the Department of Revenue.

For the first six months of the year, the credits will be distributed "in a manner geographically proportionate to enrollment in recognized non-public schools in Illinois," according to the statute." If the entire $75 million in credits is not claimed under that formula by June 1, the rest will be granted on a first come, first served basis.

Thus the statute ensures that potential donors in all parts of the state will have a chance to get in on the program for the first five months of the year. But there’s no such protection based on the size of donations. So, theoretically, 100 donors giving $1 million each to scholarship granting organizations throughout the state could quickly gobble up all the allowable tax credits.

Under that scenario, Lewis would be correct in her "tax shelter for the wealthy" claim.

The Chicago Teachers Union describes Illinois’ impending private school tax credit scholarship plan as a "voucher program" that amounts to a "tax shelter for the wealthy."

It’s clear that "voucher program" to the CTU means any system in which public dollars directly or indirectly reach private schools. By that definition, CTU is correct regarding Illinois’ Invest in Kids Act.

But those who follow the issue make a distinction between voucher programs -- in which states directly appropriate funds for private school tuition -- and scholarship credit programs funded with private money and incentivized with tax credits.

Illinois’ scholarship program has safeguards to ensure that potential donors from all parts of the state can contribute, but it doesn’t have protections against wealthy donors quickly claiming all $75 million of its tax credits.

Lewis’ statement is partially accurate but leaves out some important details. We rate it Half True.

Bruce Rauner
stated on December 4, 2017 a press conference:
"The candidates controlled by Madigan, all of them have said, ‘The answer to our problems is a massive income tax hike.’ "

Daniel Biss
stated on November 27, 2017 a tweet:
These guys are now pretty much living up to the @BruceRauner standard. And falling dismally short of the @MittRomney standard. Even Romney released his full tax returns.

Bruce Rauner
stated on October 20, 2017 a press conference:
"To be clear, all my investments are in a trust that I don’t control."

Rahm Emanuel
stated on October 18, 2017 a speech:
"And over the last six years, Chicago’s economy has grown faster than the economies of New York City, Washington, D.C., or the national average."

Bruce Rauner
stated on September 28, 2017 a press conference:
"I personally am pro-choice. I always have been. And I made no qualms about that when I was elected governor."

Sarah Huckabee Sanders
stated on October 2, 2017 a press conference:
"I think if you look to Chicago, where you had over 4,000 victims of gun-related crimes last year, they have the strictest gun laws in the country. That certainly hasn’t helped there."

Michael Bloomberg
stated on September 18, 2017 a website:
"The soda tax can make a difference by reducing consumption of unhealthy soda pop and sugary beverages."

Bruce Rauner
stated on September 7, 2017 in a press release:
"Even with a permanent income tax increase... the budget is more than $1 billion out of balance…"

Karen Lewis
stated on September 4, 2017 a blog post:
The new Illinois school funding formula "created a tax shelter for the wealthy and a voucher program…"

Bruce Rauner
stated on August 28, 2017 a bill signing event:
"My grandparents were proud immigrants to the United States of America, here to Illinois in the late 1800s. My grandparents did not speak English when they were young."