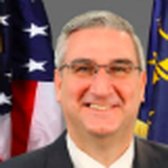 Eric Holcomb is the 51st Governor of Indiana. A lifelong Hoosier, Gov. Holcomb is a veteran of the United States Navy, served as the state’s 51st Lt. Governor, was a trusted advisor to both Governor Mitch Daniels and Senator Dan Coats, and was a former state chairman of the Indiana Republican Party. He was elected governor in November 2016, following an unprecedented 106-day campaign and was sworn in on January 9, 2017.