Paul Ryan
stated on June 27, 2017 in an interview with Fox News:
Says the CBO said "it's not that people are getting pushed off a plan; it's that people will choose not to buy something they don't like or want."

One of the strongest complaints about the Affordable Care Act, popularly known as Obamacare, is it requires everyone to have insurance. To one degree or another, both the Senate and House bills do away with that requirement.

When asked about the estimated 22 million people who would become uninsured under the Senate bill, House Speaker Paul Ryan, R-Wis., emphasized the upside of giving people the freedom to choose.

Ryan offered this take on the report on the Senate bill from the Congressional Budget Office report on Fox News on June 27:

Ryan added that ending the expansion of Medicaid also played a role in the relative drop in the insured.

We went back to the CBO report to see if in fact, it "basically" said that people will choose not to buy insurance.

In terms of 22 million fewer insured, the CBO did not.

Ryan’s press office said he was talking about the first year after the bill would take effect, and it that respect, he has a point. The CBO said it and the Joint Committee on Taxation "estimate that, in 2018, 15 million more people would be uninsured under this legislation than under current law — primarily because the penalty for not having insurance would be eliminated."

But Ryan was asked about the 22 million figure, which is the estimate for 2026.

That estimate was the sum of two groups — a Medicaid group totalling 15 million people, and the non-group insurance market amounting to 7 million people.

Medicaid is a free or low-cost government health insurance plan for the poor. The biggest single chunk of savings under the Senate bill comes out of Medicaid. The CBO said that compared with the laws in place today, 15 million fewer people who need insurance would be able to get it through Medicaid or anywhere else.

Ryan’s answer flipped the CBO presentation. According to the CBO, the Senate bill’s impact on people who would get coverage through Medicaid is double that of people who buy on the insurance market. That’s where people make the kind of choices Ryan was talking about.

On top of that, this CBO chart shows that people currently eligible for Medicaid represent about two-thirds of the drop in Medicaid enrollment. 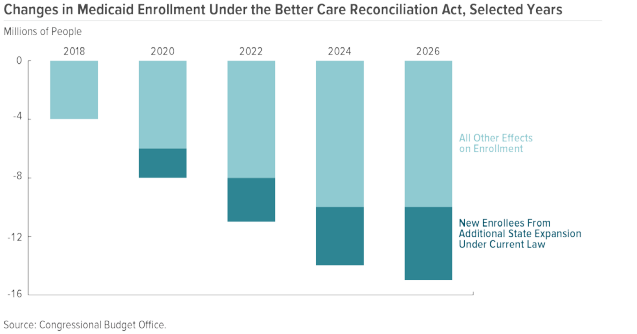 These are people who otherwise would have had a plan — Medicaid — but wouldn’t under the Senate bill.

But even for the smaller group of 7 million people in the nongroup insurance market, Ryan’s answer oversimplifies the CBO message.

The reports says, "Fewer people would enroll in the nongroup market mainly because the penalty for not having insurance would be eliminated and, starting in 2020, because the average subsidy for coverage in that market would be substantially lower for most people currently eligible for subsidies — and for some people that subsidy would be eliminated."

So the CBO number includes people who want insurance but are priced out of the market when coverage subsidies fall or disappear.

"People are going to become uninsured because they can't afford insurance any more, just like they couldn’t before the Affordable Care Act," said Diane Rowland, executive vice president of the Kaiser Family Foundation, a neutral source of health care data.

As this CBO chart shows, the loss of insurance would be heavily concentrated among people making less than 200 percent of federal poverty. 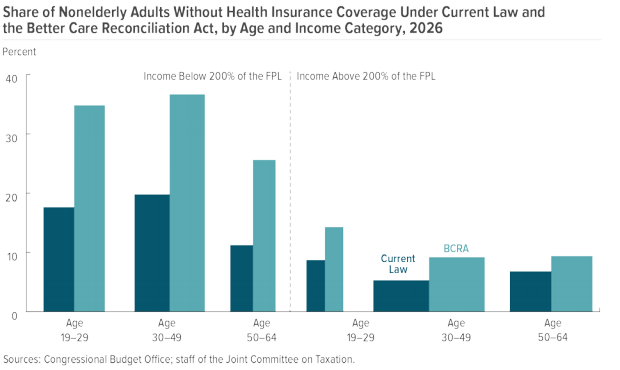 That is consistent with the idea that unaffordability, not choice, is the driving force.

Ryan paraphrased the CBO as saying that millions more would not be insured basically because they would be free not to buy a policy they didn’t want. Some people won’t buy policies due to simple choice, but many others will become uninsured because they’re no longer eligible for Medicaid. The CBO said two-thirds of the 22 million without insurance would lose out through cuts in the Medicaid program.

For the remaining 7 million, some portion of those would have chosen not to buy coverage, but some portion would want to buy but find insurance unaffordable.

Ryan’s claim contains an element of truth but ignores a lot of what the CBO said.

PolitiFact Rating:
Mostly False
Says the CBO said "it's not that people are getting pushed off a plan; it's that people will choose not to buy something they don't like or want."
Paul Ryan
House Speaker

Email interview, AshLee Strong, spokeswoman, Office of the Speaker of the House of Representatives, June 27, 2017