Don Blankenship
stated on December 3, 2017 in a campaign ad:
Says "Obama’s deadliest cover-up (in an explosion that killed 29 miners) has been uncovered" by internal government documents.

Don Blankenship, the convicted executive in one of the country’s deadliest mining explosions, is running for the U.S. Senate in West Virginia, and his first television ad aims to clear his name.

"Obama’s deadliest cover-up has been uncovered by MSHA’s own documents," the ad said. "Documents which say the MSHA (Mine Safety and Health Administration) Upper Big Branch internal report was fixed."

Blankenship, running as a Republican, spent a year in jail for conspiring to violate mine safety regulations. A jury found that under his leadership as CEO of Massey Energy, the company systematically refused to take steps that would have prevented a deadly combination of methane gas and coal dust that left 29 West Virginia miners dead in 2010.

He has always insisted that the fault lies with federal mining regulators who forced the company, he said, to use a defective ventilation system.

No investigation, and there have been several, has reached that conclusion.

"The mine operation, not MSHA, caused the explosion," said one independent report.

Multiple inquiries found that Massey Energy knew there was risk that methane gas could build up in an active mining location in the Upper Big Branch mine in Montcoal, W. Va. The company had also been warned that it needed to do more to reduce the levels of combustible coal dust there. The company maintained two sets of records of conditions in the mine. The one it shared with government inspectors listed fewer problems than the one it kept for internal purposes. In one tragic moment, dull blades used to cut free coal created enough heat to ignite gas and coal dust. The explosion that followed killed 29 people.

But Blankenship’s ad presents a series of statements to suggest foul play by the government. After saying an internal report was fixed, the ad shows an image of an internal MHSA document that says "MSHA was responsible for a defective ventilation plan at UBB." 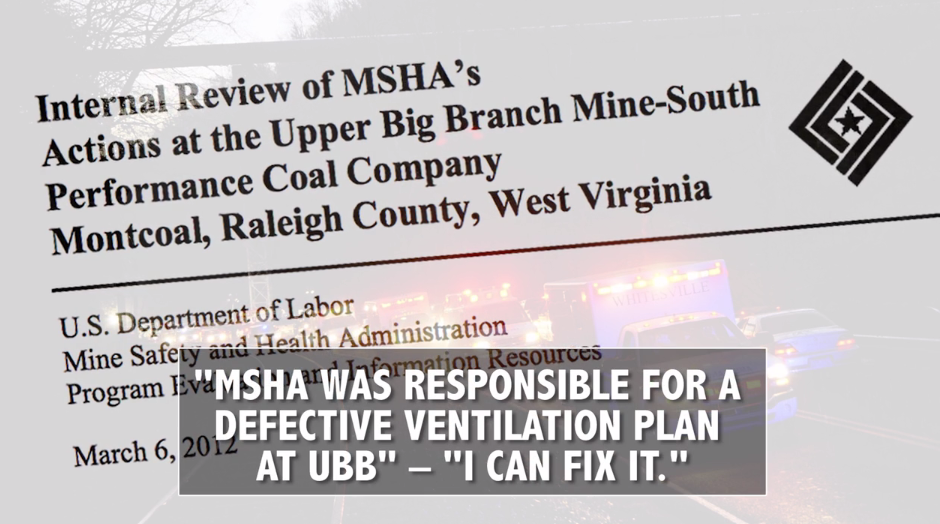 The ad goes on to say "documents were shredded," and that "government corruption is pandemic."

If, as the ad says, the government’s own documents prove that the internal review was "fixed," then those documents ought to be available.

Greg Thomas, spokesman for the Blankenship campaign, told us this ad, along with another, refers to internal government emails the campaign received "in the last couple of weeks from a very reliable source."

"At this juncture, we’re not going to release the emails," Thomas said.

When we asked why the campaign wouldn’t release the emails, Thomas at first said he didn’t know, but later explained that "we want everybody (in the government) to come out and stick to their story."

Joe Biden
stated on June 2, 2022 in a speech
Gun manufacturers are “the only industry in the country” that have immunity from lawsuits.

Thomas said the emails might be shared at some point, and when they were, they would show how the government covered up its role in the mine disaster.

A search of the government’s internal report, an independent assessment of that report, and the West Virginia governor’s independent panel investigation produced nothing to support Blankenship’s statement.

We plugged the key quotes into the Nexis database of news reports. Again, nothing.

Davitt McAteer, former head of the Mine Safety and Health Administration, led the special investigation team created by West Virginia’s governor. McAteer told us that Blankenship is "incorrect."

"I would have known whether the agency report was fixed," McAteer said. "It was not."

The agency report criticized agency staff, saying they "did not follow established Agency policies and procedures." Inspectors failed to spot deficiencies in some of the mine operations and didn’t look closely enough at company records of problems that had gone uncorrected.

McAteer’s group took a harder line on the Mine Safety and Health Administration.

"Despite MSHA’s considerable authority and resources, its collective knowledge and experience, the disaster at the Upper Big Branch mine is proof positive that the agency failed its duty as the watchdog for coal miners," the report said.

Another review by the U.S. Labor Department, which oversees the mine safety agency, echoed that, saying "if MSHA had engaged in timely enforcement of the Mine Act and applicable standards and regulations, it would have lessened the chances of -- and possibly could have prevented -- the UBB explosion."

None of this points to a whitewash of the government regulator’s contributing role in the accident. However, every investigation put Massey Energy at the center of the conditions that produced the disaster.

"Massey, through its subsidiary Performance Coal Company, violated numerous, widely-recognized safety standards and failed to prevent or correct numerous hazards that ultimately caused the catastrophic explosion," the government’s accident report said. "The evidence accumulated during the investigation demonstrates that PCC/Massey promoted and enforced a workplace culture that valued production over safety, including practices calculated to allow it to conduct mining operations in violation of the law."

Blankenship produced an ad that said the Obama administration’s internal review of the Mine Safety and Health Administration’s role in a deadly mine explosion was "fixed." The ad said the government’s own documents revealed "Obama’s deadliest cover-up."

Blankenship’s spokesman claimed to have emails that proved the point, but said the campaign would not share them.

An extensive review of multiple government reports, plus a search through a database of thousands of news articles produced no supporting facts.

The head of an independent investigation said he had come across nothing that pointed to a fix. In fact, his group’s report along with one other sharply criticized government regulators for failing to crack down on the abuses of Blankenship’s company.

There is no substance to this claim and the campaign did not provide anything that would back it up. We rate it Pants on Fire.