Jerry Brown
stated on March 26, 2017 in an interview on Meet the Press:
California’s Central Valley and Inland Empire "are experiencing tremendous job growth."

He claimed recently on NBC’s Meet the Press that California has added "2.1 million jobs in the last six or seven years."

We checked the numbers and rated that claim True.

Later in the same interview, the show’s host Chuck Todd asked Brown about inland California’s struggles, leading to another claim that caught our attention:

Chuck Todd: "But there are parts of your state that are struggling. You have rural counties, ones that don’t touch the ocean, struggling. Housing prices are up there, while jobs don’t go there."

Gov. Brown: "The Inland Empire, the Central Valley, they have a harder time. But they, too, are experiencing tremendous job growth."

Brown makes his jobs claim at about the 2:05 minute mark in the video above.

So, we wondered whether Brown had his facts right when he said these inland regions had really experienced "tremendous job growth," too.

We set out on a fact-check.

Home to about 4.5 million people, Riverside and San Bernardino counties make up what’s known as the Inland Empire, a sprawling set of communities east of Los Angeles.

The economists we spoke with say Brown’s case for "tremendous job growth" here is a strong one.

The region’s 3.2 percent job growth rate was the fastest among the state’s large metro areas from February 2016 through February 2017, said John Husing, chief economist for the Inland Empire Economic Partnership. 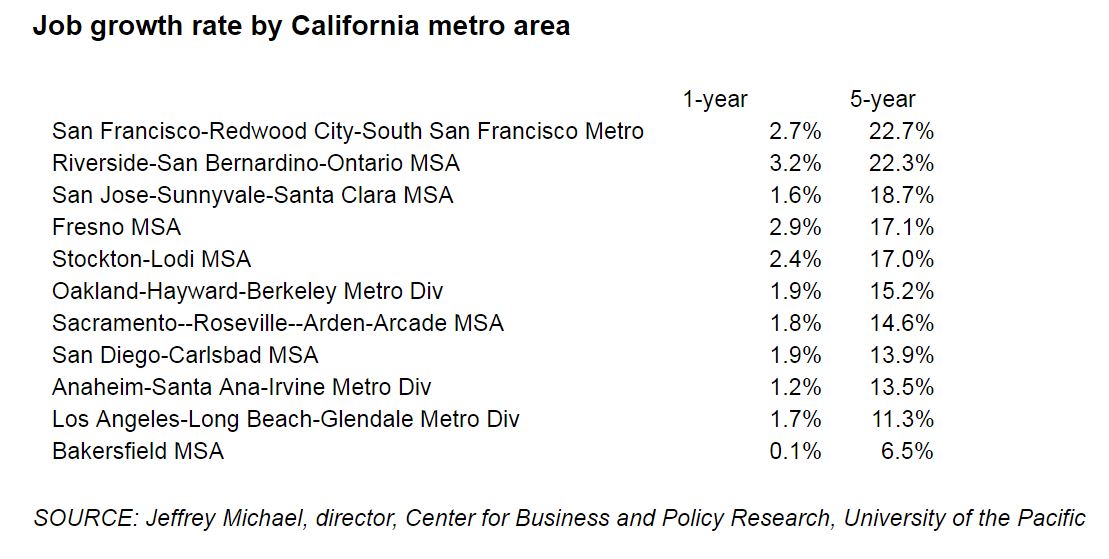 During that year, it added 47,500 jobs, which was more than the 35,700 created in the Santa Clara metro area, considered the heart of Silicon Valley, Husing said.

"This area is a real growth engine," he added, listing construction, logistics and transportation among the growing sectors.

Over the past five years, as the region has recovered from the Great Recession, it added jobs at a rate of 22.3 percent.

A spokesman for the Brown Administration cited the same statistics backing up the governor’s claim.

Colin Strange of the San Bernardino Area Chamber of Commerce said San Bernardino is seeing job growth, but mainly in "blue-collar jobs" that pay about $15 per hour including fork-lift operators and truck drivers.

Husing, who has studied the region’s wages, said the Inland Empire has a lower share of high-paying administrative jobs compared with the state as a whole. He said, however, that the region is outperforming the state in its share of middle-class jobs that pay between $45,000 and $60,000.

A report by Stanislaus State University in the Central Valley city of Turlock offers some help.

Those averages trailed the state’s overall job growth average, which measured 3 percent in 2015 and about 2 percent last year. But it beat the 8-county region’s 1.23 percent historical average job growth rate. 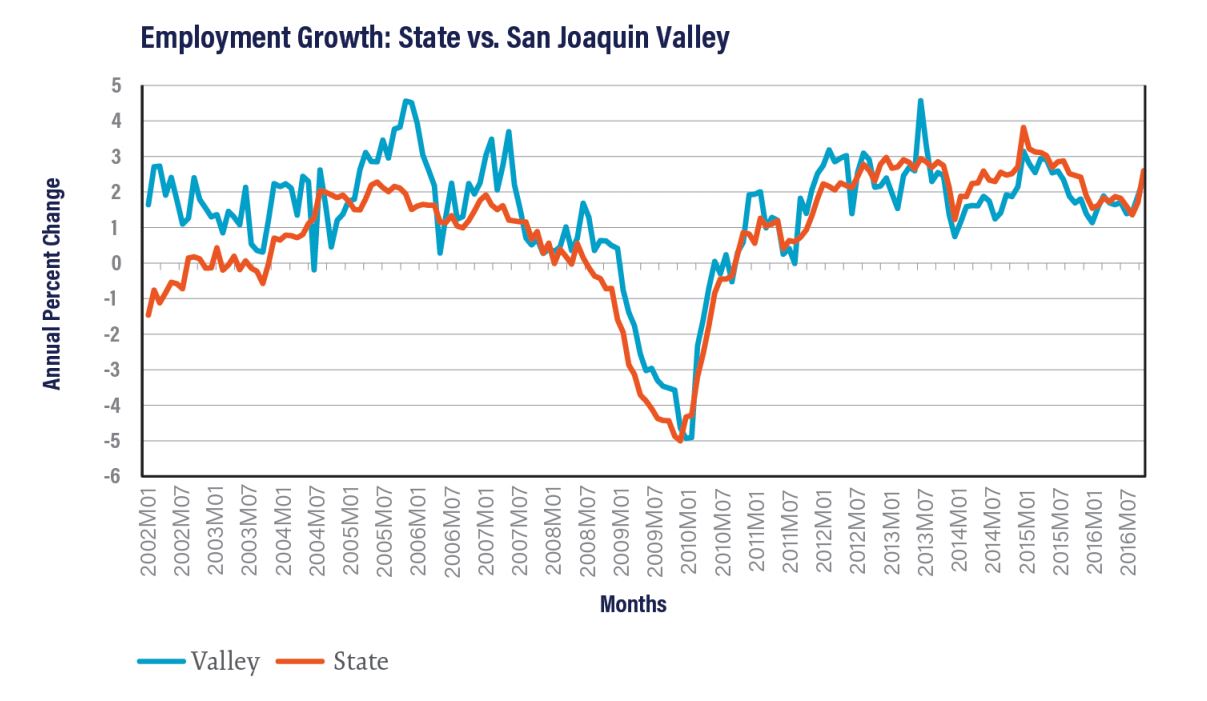 "Within its own limits, the Valley has consistently grown. But it hasn’t been a home run," Gokce Soydemir, an economics professor at Stanislaus State, said of job growth in that portion of the Central Valley.

Jeffrey Michael, director of the University of Pacific’s Center for Business and Policy Research in Stockton, added by email: "Central Valley areas have also done very well in recent years with the exception of Bakersfield, where recent economic fluctuations are tightly connected to the oil industry."

Bakersfield’s job growth rate was flat, at 0.1 percent, over the past year.

Meanwhile, Sacramento, the biggest metro area in northern portion of the Central Valley, saw 1.8 percent growth over the past year, close to the statewide average.

Economists say Brown is right about the Inland Empire. That region experienced the fastest job growth rate among the state’s large metro areas over the past year, and added more jobs than the Santa Clara metro area, the heart of Silicon Valley, during that period.

Job growth in the Central Valley, while it’s outperformed its historical benchmark in much of the diverse region, hasn’t kept up with the overall state average. The governor’s argument here needs this key clarification.

In the end, we rate his overall claim Mostly True.