Barack Obama
stated on January 20, 2015 in his 2015 State of the Union address:
"Since 2010, America has put more people back to work than Europe, Japan, and all advanced economies combined."

Positive economic indicators were a major piece of President Barack Obama’s 2015 State of the Union address, including a claim he repeated throughout 2014: that the American economy has outperformed the economies of other advanced countries.

In talking about his goals for the upcoming year, Obama said, "As we better train our workers, we need the new economy to keep churning out high-wage jobs for our workers to fill. Since 2010, America has put more people back to work than Europe, Japan and all advanced economies combined."

We previously rated a similar statement by Obama, giving him a Half True for the claim that "we've created more jobs in the United States than every other advanced economy combined since I came into office." His numbers at the time were off, and it seemed like the other economies were ever so slightly edging out the United States for total jobs created.

A few months later, we’re able to update this fact-check with more recent data. The new information actually lines up better with Obama’s claim. But there are still problems with the idea that people are being put back to work.

How does the U.S. compare to the other advanced economies?

For this fact-check, we’ll use International Monetary Fund data. The IMF classifies 36 countries as "advanced economies" and seven of those as "major advanced economies." We looked at total average annual employment from 2010 through 2015. (This counts the number of payroll positions, meaning one person who works two jobs would be counted twice.)

And it’s clearly more than what happened in the smaller group of other G7 countries (Canada, France, Germany, Italy, Japan, the United Kingdom).

Looking at the percentage growth rate instead of the absolute number of jobs helps to account for the population differences among these advanced nations. And by this measurement, the United States is not on top.

The United States’ percentage growth rate is lower than quite a few nations on the IMF’s list of advanced economies, including: Australia, Canada, Estonia, Germany, Iceland, Israel, Luxembourg, Malta, New Zealand, Norway, Singapore and Switzerland. The country on this list with the highest job growth rate was Singapore, with a rate of nearly 15 percent.

Is the U.S. putting 'more people back to work'?

So if you look at net job creation, the White House claim is on target. What about the wording of putting "more people back to work," as Obama said?

To support its claim when we fact-checked this a few months ago, the White House cited an internal analysis -- one we weren’t able to access for independent verification.

They told PolitiFact that the analysis "finds that 14.9 million people have returned to work in advanced economies since the beginning of 2010. Just over half—or 7.5 million—are in the United States. In other words, the number of people put back to work in the United States exceeds the net total for all other advanced economies combined (7.4 million)."

The White House said it’s notable that the United States accounts for the majority of these jobs since the U.S. population only accounts for about 31 percent of the population in advanced economies.

The White House added that within the narrower group of G7 nations the U.S. share "vastly exceeds the rest of the G7 (7.5 million vs. 4.6 million)."

However, the White House is using net employment gain, which doesn’t necessarily refer to people who became unemployed and went back to work -- the clearest definition of putting people "back to work," as Obama said. It’s possible that it could include people entering the workforce for the first time.

We were unable to find other research to corroborate Obama’s claim.

On the question of putting people back to work in the United States alone, we found that the Obama administration does have some data on its side. Statistics for the long-term unemployed have fallen consistently from their recession peak, both measured by the number of long-term unemployed Americans and the median duration of unemployment.

The following Bureau of Labor Statistics chart shows the median duration of unemployment, in weeks, since January 2009, the start of Obama’s presidency. 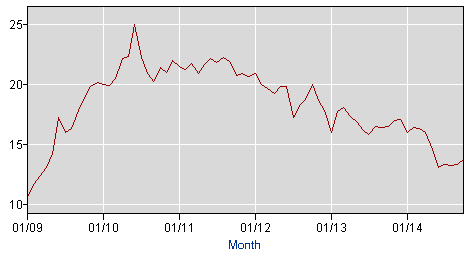 More importantly, the labor force participation rate -- that is, the percentage of the civilian, noninstitutionalized population that is either working or looking actively for work -- has fallen consistently since Obama took office, from 65.7 percent to 62.8 percent.

This graph from the U.S. Bureau of Labor Statistics shows the falling rate of labor participation since January 2009, when Obama took office. 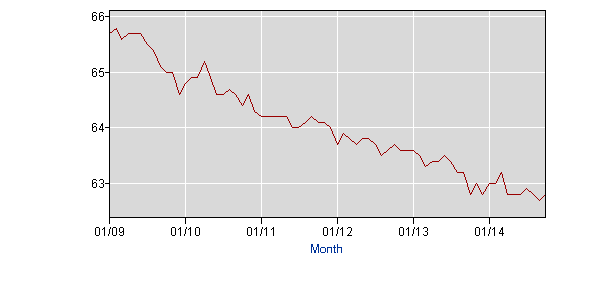 The idea that long-term unemployed Americans are increasingly leaving the labor force is supported by an analysis of Bureau of Labor Statistics data by FiveThirtyEight.com’s Ben Casselman. The data led him to conclude that "the share of the long-term jobless who are giving up their job searches has been rising steadily, even as the job-finding rate has remained largely flat."

This puts a damper on the notion, stated by Obama, that "we’ve put more people back to work" in recent years.

She noted that presidents are far from the only factor in economic growth, so it would be unrealistic for Obama to claim too much credit for these numbers. Indeed, the United States hemorrhaged jobs in the last months of 2008 and the first few months of 2009 -- meaning there was a lot of room to grow.

"Is it a good thing to just put people back to work?" Sinclair said. "This mostly means we had a terribly bad recession and have finally recovered from it. That's not necessarily something to consider a policy triumph."

Obama said, "Since 2010, America has put more people back to work than Europe, Japan, and all advanced economies combined."

From publicly available data, we know that since 2010, the United States has created more jobs than the 35 other advanced economies combined. However, it’s not as clear cut that this recovery involves putting "more people back to work," as Obama suggests. The labor force participation rate has consistently declined during this period, suggesting that more and more unemployed Americans are dropping out of the workforce, rather than taking new jobs.

On balance, we rate Obama's claim Half True.