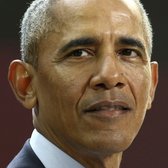 Barack Obama is the former president of the United States. Obama also served as a U.S. senator from Illinois. He was born in 1961 in Hawaii, where his parents met as students at the University of Hawaii. Obama's father is from Kenya and his mother is from Kansas. He graduated from Columbia University and received his law degree from Harvard Law School. Obama previously served in the Illinois state Senate and was an instructor at the University of Chicago Law School. He and his wife, Michelle, have two daughters, Malia and Sasha.