Michael McCaul
stated on October 22, 2012 in a League of Women Voters guide for Texas and Austin voters:
Says U.S. corporate tax rate is "highest in the world at 35 percent."

The statistic Michael McCaul cited -- U.S. federal corporate tax not including state and local taxes -- is the highest on this chart from the global Organization for Economic Cooperation and Development.

To a recent voters guide question on how to combat unemployment, McCaul -- a Republican seeking another term representing the 10th Congressional District -- gave responses that included lowering America’s "corporate tax rate, highest in the world at 35 percent."

A decrease to 25 percent would "stop driving American businesses overseas," McCaul said in the guide, produced by the Austin and Texas chapters of the League of Women Voters and the Austin American-Statesman. McCaul faces Tawana Cadien (Democrat) and Richard Priest (Libertarian) on Nov. 6.

PolitiFact has recently checked corporate tax rate claims with a different figure, so we decided to compare this statement.

McCaul spokesman Mike Rosen told us by email that 35 percent is the top statutory rate for U.S. corporate taxes, citing an April 5, 2012, "backgrounder" from the Council on Foreign Relations.

Most news stories we read while researching this fact-check used the latter rate -- combining federal, state and local. That’s the yardstick used in related PolitiFact articles, and it’s also the statistic that made headlines when an April 1, 2012, rate cut took effect in Japan and moved the U.S. into first place.

The rest of the top five are France, Belgium and Germany, according to a September 2011 report by the Washington-based Tax Foundation that gave 2012 federal-plus-state/local rates, weighted to reflect the economies’ sizes so that small countries would not have a disproportional effect on the average. 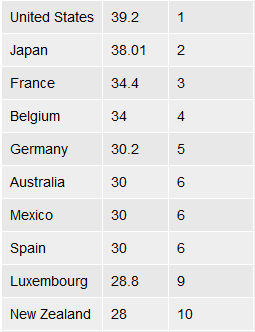 The foundation’s 2011 report and most of the news articles we read for this story limited their comparisons to advanced industrialized countries -- often citing the 34 members of the global Organization for Economic Cooperation and Development.

We asked foundation spokesman Richard Morrison for help tracking down country-by-country rates that did not include taxes below the federal level, to make an apples-to-apples comparison with McCaul’s 35 percent.

Morrison pointed us, via email, to an OECD web page with a chart showing those numbers for 2012.

The U.S. rate of 35 percent is the highest on the chart, with the other OECD nations averaging 23.6 percent (figures that, unlike the statistics cited above, are not weighted to reflect size of national economies).

So McCaul’s statement holds true for federal-level-only corporate tax rates as well as for the state/local-plus-federal rate.

But recent PolitiFact items have also taken into account the rate corporations pay after deductions and exemptions, called the effective rate.

In an Aug. 27, 2012, Truth-O-Meter article, PolitiFact New Jersey wrote, "When you factor in various tax breaks, the rate actually paid by U.S. businesses has been among the highest in the world, but not in first place, studies show."

The 2011 foundation report summarized 13 studies of effective corporate tax rates across the world, which used different methodologies and were not limited to the OECD roster. The smallest study compared 10 countries; the largest, 183.

Those studies found the U.S. effective tax rate ranging from 23 percent to 34.9 percent, which often placed it in the top five, but never No. 1.

But the U.S. hit the top spot in a more recent report. Morrison told us the latest such comparison was made in September 2012 for the libertarian Cato Institute. That report calculated the U.S. effective rate at 35.6 percent and ranked it highest among OECD nations but fourth among all 90 nations it examined.

How did U.S. rates get to be among the highest? Actually, other countries dropped theirs, we learned by phone from Jonathan Masters, author of the Council on Foreign Relations piece.

We found succinct descriptions of the history in Time magazine and The Hill, a Washington, D.C. newspaper. An April 2, 2012, Time blog post says that while the U.S. rate stayed steady for two decades, "the trend internationally has been towards lower corporate tax rates." The Hill’s Aug. 27, 2012 blog post says that in 1986, the OECD nations’ average corporate tax was 50 percent, but "today, it’s 25 percent for those countries -- it has fallen in half. Meanwhile, the U.S. rate, which fell from 46 percent to 34 percent as a result of tax reform in 1986, is now stuck at 35 percent."

McCaul said the U.S. "corporate tax rate" is the "highest in the world at 35 percent."

The rate set by federal statute is the highest, both by itself and when considering the federal rate plus state and local taxes.

Email interview with Richard Morrison, manager of communications for the Tax Foundation, Oct. 26, 2012