Jan. 6 hearing focuses on Donald Trump’s pressure on states to overturn the vote

Rusty Bowers, Arizona state House Speaker, at the June 21, 2022 hearing of the House committee investigating the Jan. 6 attack on the U.S. Capitol. (AP)

A Georgia election clerk described how her life was upended and her family frighteningly harassed with racist texts and worse. An Arizona Republican leader told of the ugly texts, death threats and loss of friends that came as he rebuffed efforts by a sitting president, Donald Trump, to revoke election results that showed another man won.

During the June 21 hearing of the key findings by the House select committee on the Jan. 6 attack, witnesses gave glimpses of the personal harm that resulted from Trump’s insistence that the 2020 presidential election was shot through with fraud.

"I don’t go anywhere," testified Wandrea "Shaye" Moss, a former clerk for the Fulton County Georgia election office, who found herself in the crosshairs of Trump loyalists before she finally quit.

Trump publicly accused Moss’s mother of being a "professional vote scammer" in Georgia. Trump lawyer Rudy Giuliani released a video accusing both women of working up a fraud scheme. Supporters of Trump responded by barging into her grandmother’s home, looking for Moss, saying they were there to make a citizen’s arrest. She found out when her grandmother called her screaming.

"It affected my life in a major way," Moss said. "All because of lies. Because of doing my job." 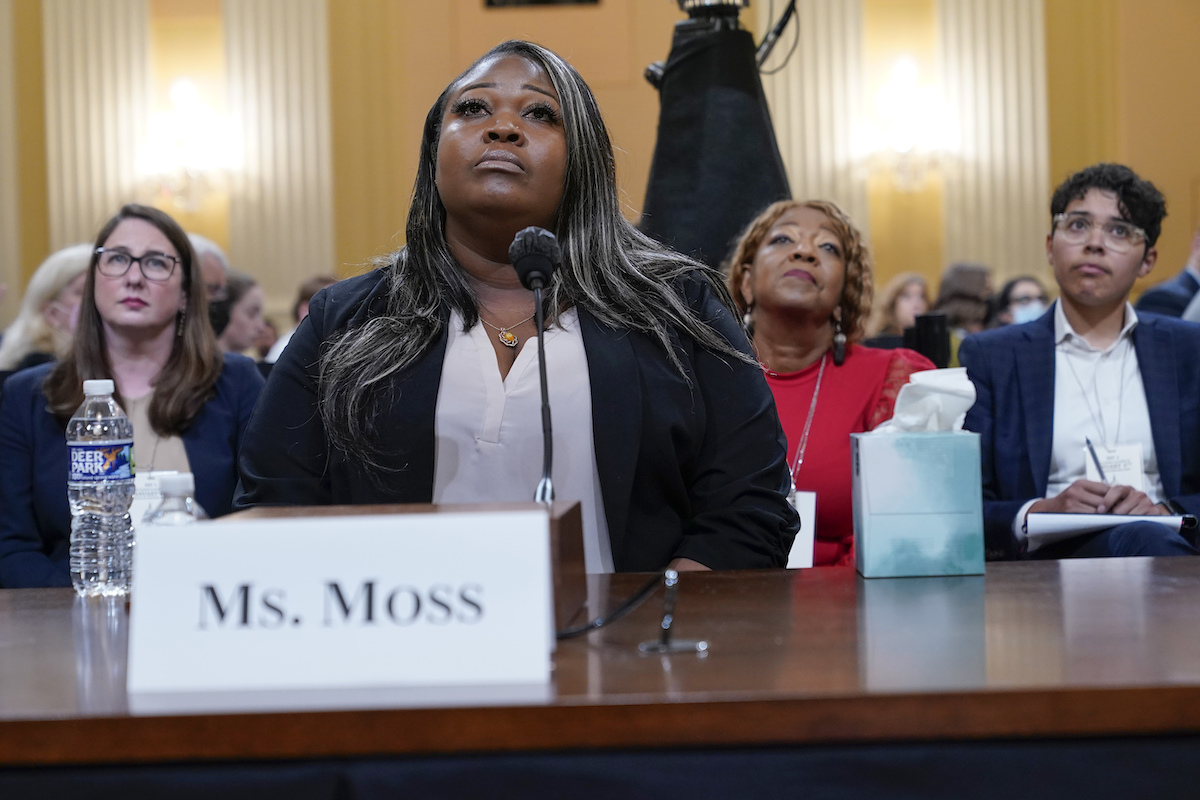 Wandrea "Shaye" Moss, a former Georgia election worker, testifies as her mother, Ruby Freeman listens, at a June 21, 2022 hearing of  the House select committee investigating the Jan. 6 attack on the U.S. Capitol. (AP)

Arizona Speaker of the House Rusty Bowers, a Republican who wanted Trump to win reelection, rebuffed Trump’s personal plea to call a special session to revoke the results that confirmed Joe Biden’s victory. Bowers testified that he and his wife have dealt with death threats and harrassing texts.  He confronts protesters outside his home on weekends, some armed, calling him a pedophile.

"It is painful to have friends, who have been such a help to me, turn on me with such rancor," Bowers said during the hearing, reading from his personal journal entry from December 2020. "I do not want to be a winner by cheating. I will not play with laws I swore allegiance to, with any contrived desire towards deflection of my deep foundational desire to follow God's will, as I believe He led my conscience to embrace. How else will I ever approach Him?"

Here’s a recap of other key moments of the hearing.

Trump and Giuliani repeatedly pressed Bowers to negate the Arizona election results. In a call with both men, Bowers said they told him over 200,000 immigrants in the country illegally and over 5,000 dead people had voted.

"I said, 'Do you have their names? Will you give them to me?'," Bowers told the committee. "The president interrupted and said, 'Give the man what he needs, Rudy.''"

Asked if he ever got a list of names, Bowers answered, "Never." He was promised the lists of names on a second occasion. Nothing came of it.

In Georgia, Trump and his team made specific claims of ineligible voters. Georgia Secretary of State Brad Raffensperger, who also testified at the hearing, ticked off the assertions and what investigators found.

On further digging, Raffensperger said, they found another two dead voters, for a total of four.

RELATED VIDEO:
There were no ‘suitcases’ of illegal ballots

One of Trump’s more specific claims in Georgia involved alleged "suitcases" of illegal ballots at the central counting facility in Atlanta.

During a Dec. 3, 2020, hearing with Georgia state legislators, Giuliani and his team played surveillance video. The footage allegedly showed election workers at Atlanta’s State Farm Arena telling election observers to leave, pulling suitcases filled with ballots from under a table, and illegally counting them with no observers present.

Gabriel Sterling, the chief operations officer at Georgia’s Secretary of State’s Office, repeated to the committee what he had made clear at the time.

"They are standard ballot carriers that allow for a seal to be put on them so they are tamperproof," Sterling said. 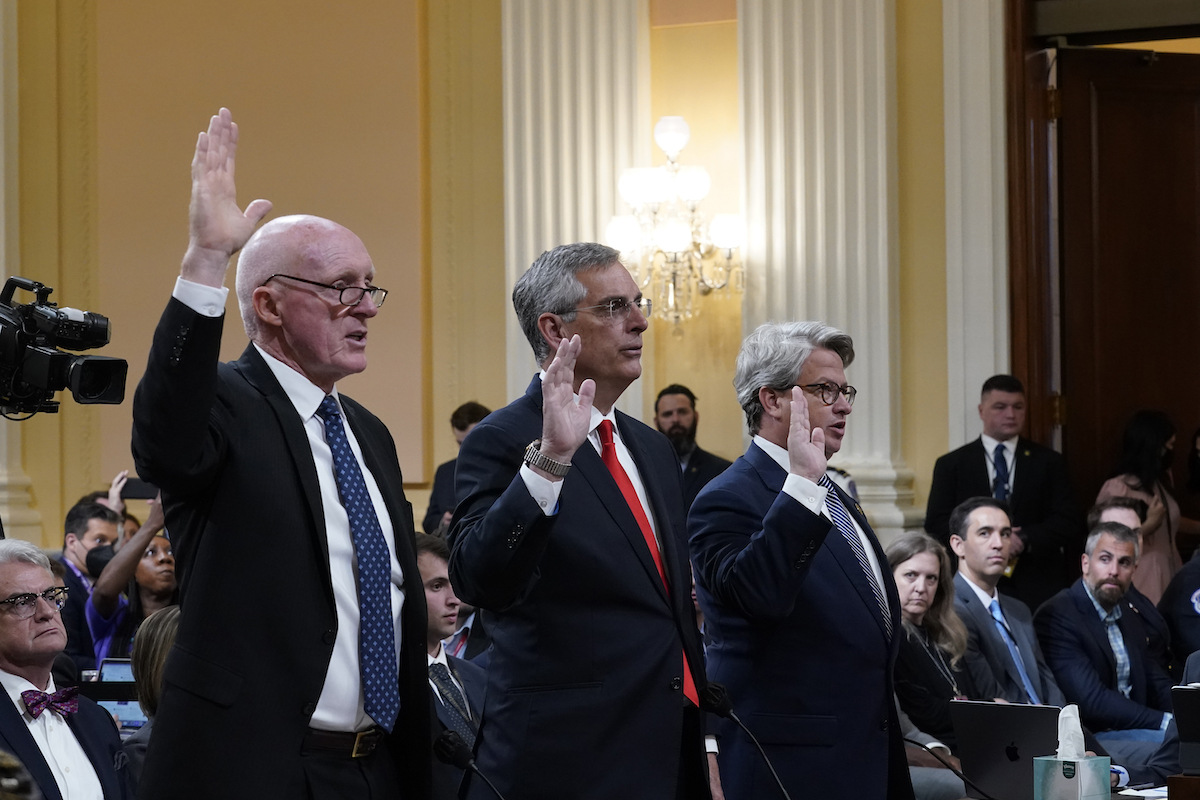 As PolitiFact has reported, there was never any evidence of skulduggery. Election workers had been told to go home for the evening, and put the ballots in the sealed boxes. When orders changed and they were told to keep counting, they opened the boxes and resumed processing them. The full video, Sterling said, made that quite clear.

"What's really frustrating is the president's attorneys had the same video," Sterling said. "They saw the exact same things the rest of us could see. And they chose to mislead state senators and the public about what was on that video."

The scheme to introduce to fake elector slates

On Dec. 14, 2020, as states certified their results, in several battleground states where Biden had defeated Trump, representatives of the losing side decided that they, too, would gather as purported electors to sign certificates falsely attesting to a Trump win and submit them for approval by Congress.

This was part of a plan to give Vice President Mike Pence a pretext for setting aside the official electoral college votes on Jan. 6, 2021.

Trump White House chief of staff Mark Meadows and Trump’s lawyers, Giuliani and John Eastman, worked the phones and their Republican party networks to organize the fake slates of electors.

What the hearing added was video depositions from Trump campaign lawyers saying they wouldn’t participate.

Former campaign attorney Justin Clark said he told the campaign, "Unless we have litigation pending in these states, I don’t think this is appropriate. This isn’t the right thing to do."

Another former campaign lawyer Matt Morgan joined one of his colleagues and told Trump’s legal team, "This is your task. You are responsible for electoral college issues moving forward.’ And this was my way of taking that responsibility to zero."

Just before the Capitol breach on Jan. 6, Sen. Ron Johnson, R-Wis., had been given alternative slates of electors for Wisconsin and Michigan. The committee shared texts between a Johnson staffer and a top aide to Pence. The staffer asked if Johnson should hand them to Pence. Pence’s aide was firm.

"Do not give that to him," he texted.

The limits of facts

The tale of a stolen election holds an enduring power over the Republican Party. In their latest party platform, Texas Republicans rejected the legitimacy of Biden’s victory. In survey after survey, 70% of Republican voters say Biden didn’t win fair and square.

Sterling, a Republican, said correcting Trump’s claims "was kind of like a shovel trying to empty the ocean." And, in that effort, "the facts don’t matter as much."

He described an exchange with a lawyer colleague. Sterling layed out the facts that debunked five common false claims. On each point, the man would say, "OK. I get that."

But it made no difference. At the end, he said, the lawyer told him, "I just know in my heart that they cheated."

RELATED: What you need to know about the fake Trump electors

RELATED: Here’s why Georgia’s Republican officials are confident in their presidential election results

PolitiFact, In Georgia race, election denier distorts Brad Raffensperger’s use of a Zuckerberg grant, May 19, 2022

PolitiFact, No evidence that 4,925 voters from out-of-state voted in Georgia in the presidential election, Jan. 4, 2021

PolitiFact, What you need to know about the fake Trump electors, Jan. 28, 2022