Will Tampa’s Super Bowl be a super spreader? Experts worry about what NFL can’t control

Raymond James Stadium, the site of NFL Super Bowl LV between the Tampa Bay Buccaneers and the Kansas City Chiefs, on Jan. 28, 2021, in Tampa, Fla. (AP/O'Meara)

The NFL has worked with authorities at all levels to keep Super Bowl LV safe for the host city of Tampa, where the Tampa Bay Buccaneers will face off against the Kansas City Chiefs.

With a smaller stadium crowd and requirements for masks and social distancing in and around Raymond James Stadium, league and city officials say they’ve done all they can to prevent the game from doubling as a coronavirus superspreading event.

"We want everyone to come here healthy and to go back home healthy," said Tampa Mayor Jane Castor. "The only people we want leaving disappointed are the Kansas City Chiefs, because we are going to win the Super Bowl."

The stadium will host 24,700 fans, including 7,500 vaccinated health care workers attending for free. That’s a little more than one-third of the stadium’s 66,000-plus capacity. Still, the Super Bowl crowd will be 54% bigger than the largest crowd the Bucs hosted in 2020.

Several public health experts told PolitiFact that the COVID-19 safety plan looks solid, although there’s more that the NFL could do to limit the risk of transmission.

What they’re most concerned about are celebrations beyond the stadium that are harder to control: the parties in people’s homes or at restaurants and bars.

For Tampa Bay, the Super Bowl is especially significant, because the hometown Bucs are the first team in NFL history to play the Super Bowl in their backyard. It’s the team’s first time back in the big game since 2003, when they brought home the Vince Lombardi Trophy. 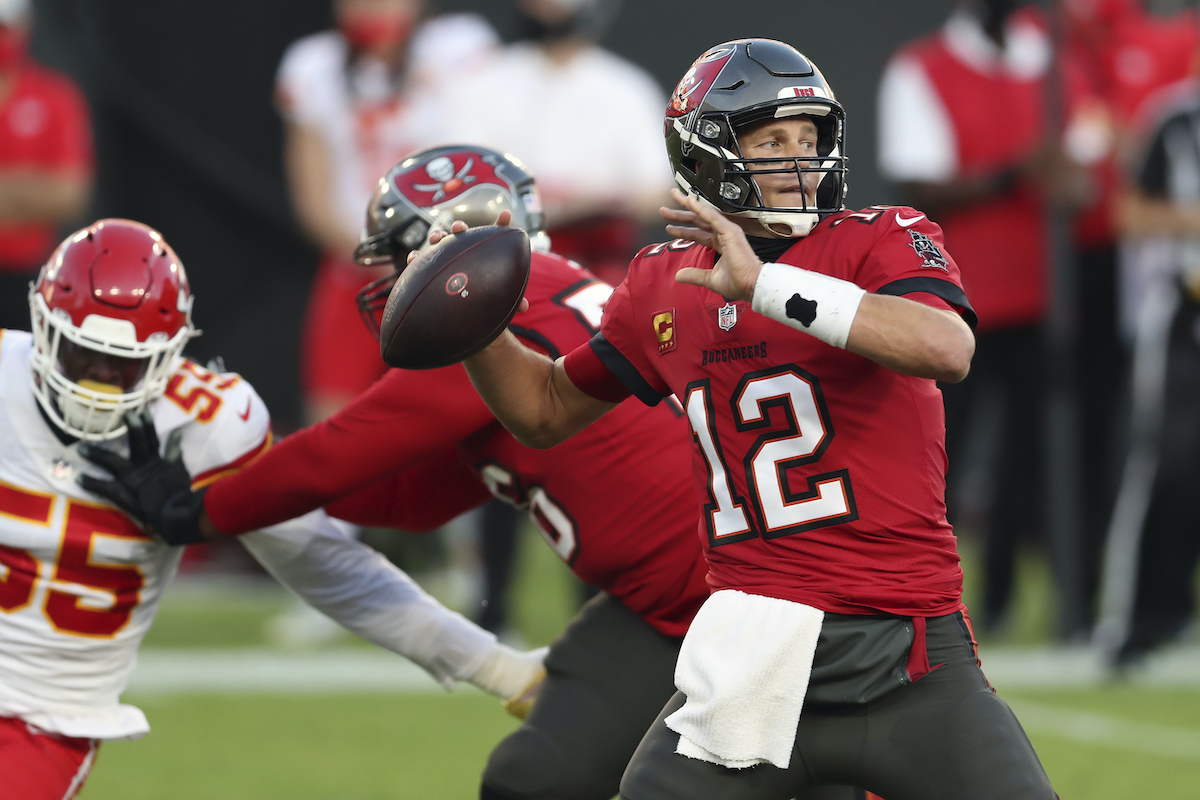 "I’m not convinced that the Super Bowl itself, meaning the people in the stadium watching the game, will become a super spreader," said Marissa Levine, a professor of public health practice at the University of South Florida. "I think that the precautions the NFL is taking are smart. I’m much more concerned, actually, about what happens outside the stadium and across the nation in people’s homes and at gatherings for the Super Bowl."

How the NFL plans to keep the Super Bowl safe

The Feb. 7 matchup will be unlike any other Super Bowl in the NFL’s history, with fans sitting in scattered seats, receiving a pandemic goodie bag and signing a mild "health promise."

Every fan at the stadium will receive a KN95 mask, hand sanitizer, antibacterial wipes and a COVID-19 safety card, NFL spokesperson Brian McCarthy told PolitiFact. They are required to wear proper facial coverings, stick to their assigned seats and maintain 6 feet of physical distance from others.

Similar safety measures are in place for the Super Bowl Experience, an interactive football theme park with games and virtual meet-and-greets, which is free for fans using an NFL app. 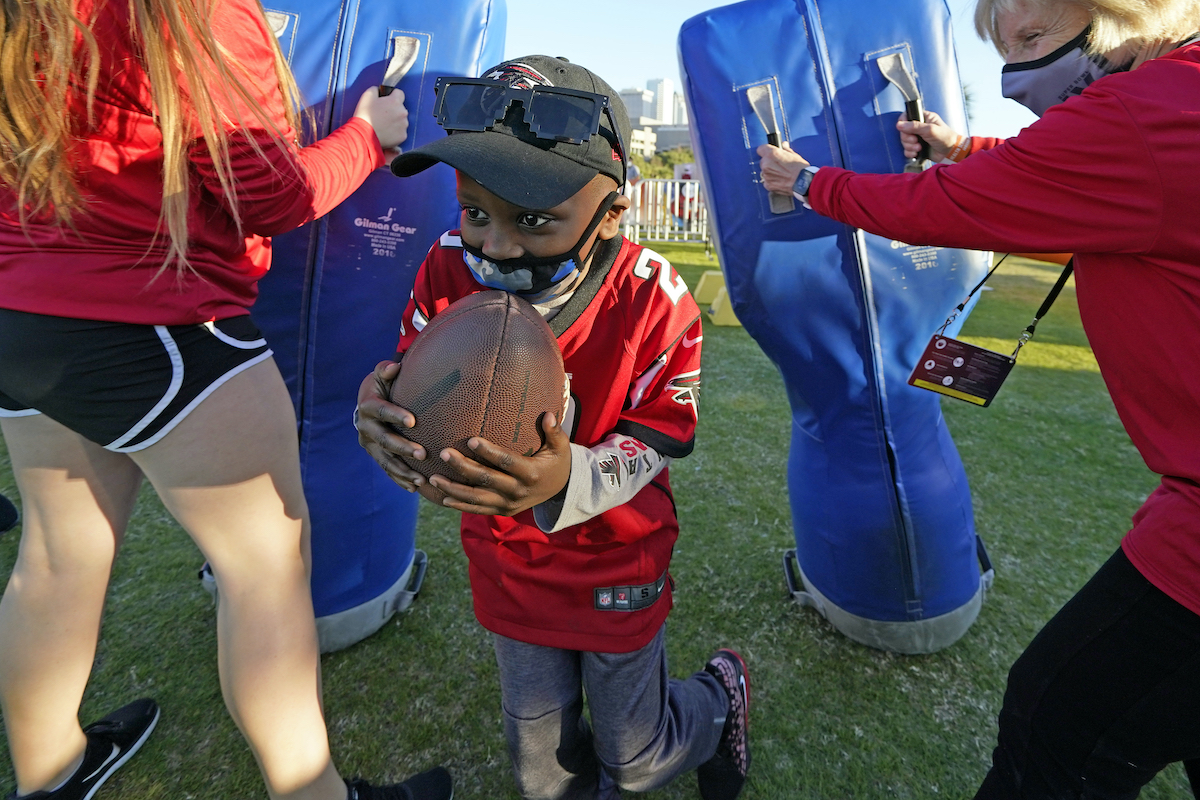 NFL security and staff are working with local law enforcement to provide free masks and make sure people wear them and keep their distance. Fans who booked reservations for the main attractions at Julian B. Lane Park are allowed to hang out for up to four hours.

Fans who violate the league’s mask mandates in the stadium or at the outdoor fan experience will risk being removed, McCarthy said.

The league is also requiring all Super Bowl ticket holders and attendees of the fan experience to agree to a COVID-19 "fan health promise" as part of the mobile ticketing process. The promise asks fans to "confirm, on behalf of themselves and their guests," that they have had limited travel, that they have not tested positive for COVID-19 or been exposed to the virus within two weeks, and that they have not experienced symptoms within two days.

The agreement is better than nothing, said Cindy Prins, an epidemiologist at the University of Florida. But it might not stop fans who are infected but asymptomatic, or who don’t report their symptoms or exposure because they don’t want to give up the experience they paid for.

One thing missing from the setup: on-site testing.

Rapid COVID-19 testing conducted on the day of the game could catch some asymptomatic cases. But the NFL will not test Super Bowl attendees for COVID-19 or require proof of a negative test upon entry to the stadium, McCarthy told PolitiFact. Nor will it screen fans for symptoms by taking their temperatures — as it plans to do for gameday staff — or using COVID-19 detection dogs to sniff out infections, as the NBA’s Miami Heat introduced Jan. 28.

Testing fans has not been a part of the NFL’s safety protocols all season, McCarthy said.

Will the NFL’s precautions be enough?

Experts said the NFL’s rules requiring spaced-out seating, cashless payments and mask wearing should minimize transmission between groups of fans, so long as they are enforced.

That’s been shown to work at other NFL games this season. 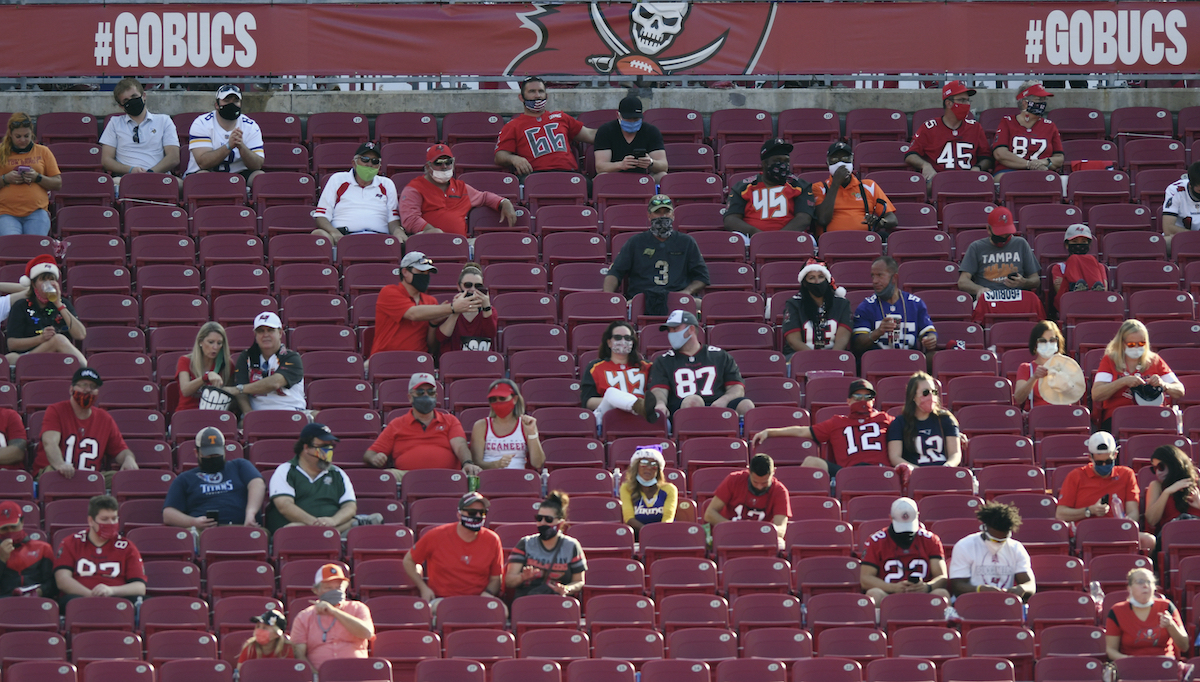 Socially distanced fans are shown during a regular-season NFL game between the Minnesota Vikings and the Tampa Bay Buccaneers in Tampa, Fla., on Dec. 13, 2020. (AP)

Jagpreet Chhatwal, an assistant professor at Harvard Medical School, helped design a tool to detect COVID-19 outbreaks in counties that hosted professional football games. Data collected over three months on NFL and NCAA football games suggests that "attendance in the stadiums is unlikely to lead to outbreaks," Chhatwal said.

"We can essentially break a transmission chain — and prevent a super spreader event — by adhering to masking and 6-feet social distancing at Raymond James Stadium," Chhatwal said.

One risk that remains, however, is that fans will attend the game with friends and family from outside of their households. A Chiefs fan from Missouri who goes to the game with a friend from Tampa, for example, could pass the virus to the friend he came to visit, or vice versa.

There’s no requirement that out-of-state travelers self-isolate when they arrive in Florida.

"We’re kind of making an assumption that it’s your household bubble that’s going to the game together," Prins said. "That may not be true in a lot of cases." 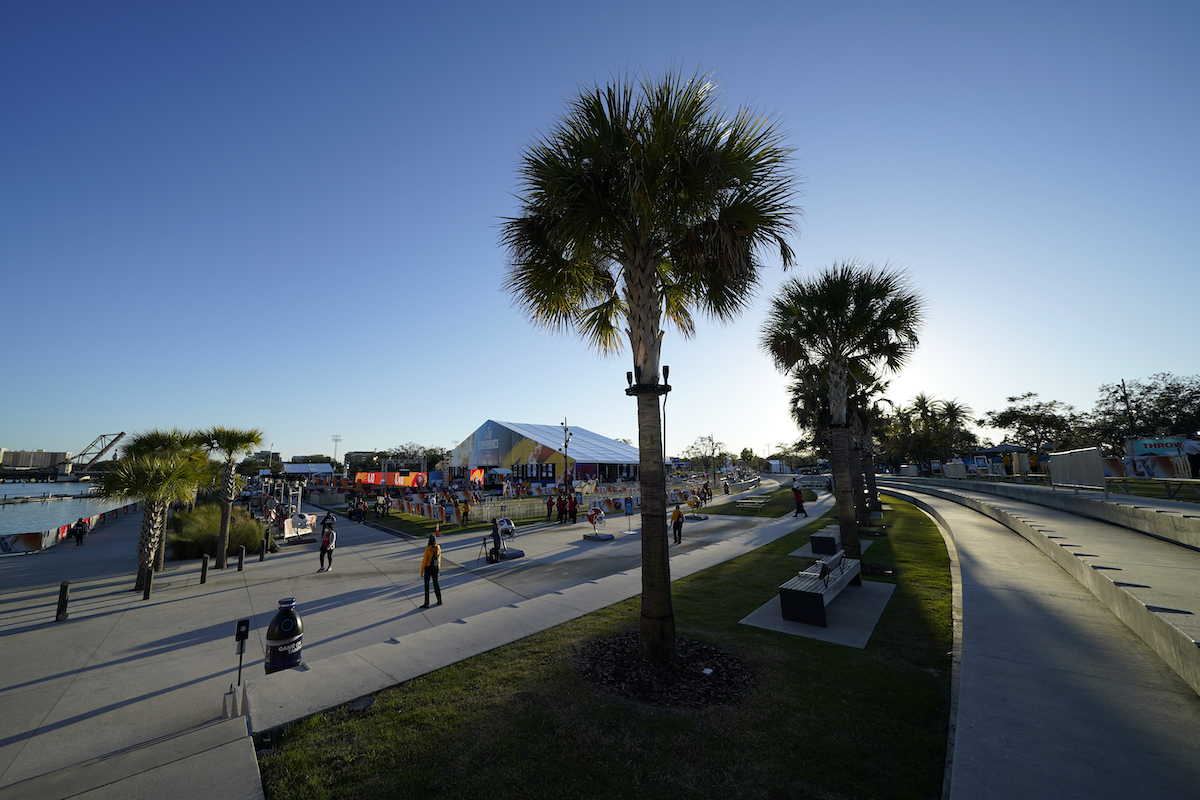 The NFL will work with public health authorities to contact trace cases linked to the Super Bowl, McCarthy said. He said similar efforts during the regular season revealed "no clusters of positive cases attributed to NFL games," which drew 1.2 million fans to 19 different stadiums.

The NFL can’t control everything that happens in Tampa

Experts told PolitiFact that they’re worried that beyond the game, super-spreading behavior could take place at local bars, restaurants, tailgates and house parties. The safest option for fans in Tampa and across the U.S. is to watch at home with their immediate households or bubbles, since mixing households indoors carries increased risks.

"Post-game celebrations could be concerning if the bars and restaurants are open in the area, where people tend not to take appropriate precautions," Chhatwal said.

"The issue is going to be all the other people who come to Tampa," added Levine, who pointed to crowded New Year’s Eve celebrations that spilled out into the streets in places like Ybor City.

As of Feb. 1, there’s an estimated 27% chance that at least one person would have COVID-19 at a gathering of 25 people in Hillsborough County, which includes Tampa, according to a peer-reviewed risk assessment tool from Georgia Tech University.

A spokesperson for Visit Tampa Bay said many local hotels, restaurants and bars are expecting the Super Bowl to bring the most business they’ve seen since the start of the pandemic.

Pete Boland, co-owner of The Galley and Mary Margaret’s Olde Irish Tavern in St. Petersburg, said he’s excited for fans to watch the game from The Galley, a "Bucs bar since day one." Table reservations for a Super Bowl watch party at The Galley are $79.95.

Boland said The Galley spaced out its seats and set up an air filtration system to be more safe, and the bar won’t allow standing customers.

"In normal times, we’d try to pack in as many people as we can, up to fire code," said Boland, who had to temporarily close the bar in June after several staffers tested positive for COVID-19. "We’re not interested in getting people sick."

Officials in St. Petersburg plan to continue monitoring bars and restaurants and issue citations when safety measures are ignored, a city spokesperson said. In Tampa, Castor issued a new executive order requiring masks in "Super Bowl event zones and entertainment districts," including in outside areas of downtown, Ybor City, SoHo, the Channel District and in neighborhoods near Raymond James Stadium.

Tampa and Hillsborough County already require masks to be worn inside businesses.

"We are making history," Castor said on CNN Jan. 29. "People want to be a part of that, and we understand that, but we're just asking them to do it safely. Simply wear a mask."

Experts urged fans to take the pandemic seriously wherever they celebrate.

"The Super Bowl is a good thing because we all need something to carry us through this really difficult time," Levine said. "But if we go into the Super Bowl denying the fact that we’re still in a pandemic, then the overall result could be really problematic, and potentially disastrous."

PolitiFact, "The uninvited guest: How to keep the coronavirus out of Thanksgiving," Nov. 17, 2020

Phone interview with Cindy Prins, assistant dean for educational affairs and a clinical associate professor of epidemiology at the University of Florida College of Public Health and Health Professions, Jan. 27, 2021

Phone interview with Marissa Levine, professor of public health practice and director of the Center for Leadership in Public Health Practice at the University of South Florida, Jan. 28, 2021