Are Floridians better off than they were four years ago?

An entrance at Florida's Walt Disney World is closed. Squeezed by limits on attendance due to the pandemic, the Walt Disney Co. said it planned to lay off 28,000 workers in its parks divisions in California and Florida. (AP)

• Most economic measures show that the Sunshine State is broadly worse off today than it was in early 2017, when President Donald Trump took office. The obvious culprit is the novel coronavirus, which has exacted a toll even in a state that has been more aggressive than most in trying to reopen the economy.

• Prior to the pandemic, Florida’s economy was improving steadily, though not at a much faster rate than under President Barack Obama.

Shortly before the 1980 election, Republican presidential nominee Ronald Reagan urged voters to ask themselves a simple question that became a bombshell: "Are you better off today than you were four years ago?" The answer soon became clear that Americans felt they weren’t better off, and Reagan ousted President Jimmy Carter by winning all but six states and the District of Columbia.

Challengers have asked this question of incumbents ever since. So how would Floridians answer it in 2020?

Most economic measures show that the Sunshine State is broadly worse off today than it was in early 2017, when President Donald Trump took office. The obvious culprit is the novel coronavirus, which has exacted a toll even in a state that has been more aggressive than most in trying to reopen the economy.

Trump’s campaign did not respond to an inquiry for this article. On Oct. 6, the campaign touted a Washington Post column by broadcaster Hugh Hewitt titled, "How Trump has made the country better off than it was four years ago." The column does not spend much time on the economy, focusing instead on Trump, GOP tax cuts and foreign policy. "Your taxes are down, and the value of your home has likely gone up," Hewitt wrote.

Florida’s economy had been steadily improving on Trump’s watch. Most of the gains were in line with growth rates that began under President Barack Obama.

Before the pandemic hit, "most economists would say that the president hasn’t hurt the economy and likely helped," said Thomas Smythe, a professor in the department of finance and economics at Florida Gulf Coast University. "We had record low unemployment, especially among Black and Hispanic Americans. We had also seen pay gaps starting to close (in relative terms) with whites and for females and males."

COVID-19 drove key metrics off a cliff, and they haven’t yet recovered.

Let’s look at unemployment in the state. There was a pronounced spike in the unemployment rate after the coronavirus hit. Florida's unemployment rate was just 2.8%. It peaked at 13.5% in April and was 7.7% in August. (Obama’s years are shown in blue, Trump’s are in red.)

That said, this data doesn’t capture more recent developments, such as the pending layoffs of some 2,000 South Florida workers by American Airlines and nearly 6,400 Florida employees by Disney’s parks division.

The same pattern can be seen in payroll employment data, which measures how many people are working. The sharp fall-off this spring was followed by incremental improvements, but they haven’t caught up to pre-coronavirus levels, and are about where things stood in January 2017.

Florida’s decline in payroll employment was about average compared to other states, according to an analysis by the Wall Street Journal.

Extensive problems with Florida’s unemployment system worsened the pain. Experts say that Florida’s unemployment insurance system was unusually stingy before the pandemic, with a greater focus on confirming eligibility than in distributing benefits in a timely manner. When the virus hit, the system groaned under the unprecedented surge of claims.

Unemployment statistics aren’t the only indicators of the state’s struggling economy. Florida’s gross domestic product, adjusted for inflation, shows a steady rise in economic activity through the fourth quarter of 2019, followed by a small dip in the first quarter of 2020 and then a bigger dip in the second quarter of 2020. (We don’t yet have data for the third quarter of 2020.)

The hospitality industry, one of Florida’s bedrock sectors, has been hit especially hard. The collective economic activity produced by the state’s hospitality industry was 40% lower in the second quarter than what it was in late 2019. That kind of hit has rippled throughout the tourism-dependent state.

There’s one statistic that runs counter to this doom-and-gloom outlook, but it comes with such a big asterisk that it doesn’t merit much celebration: an uptick in personal income and hourly pay.

These increases, which are also seen in national data, have a straightforward cause: They stem from a surge in government assistance. 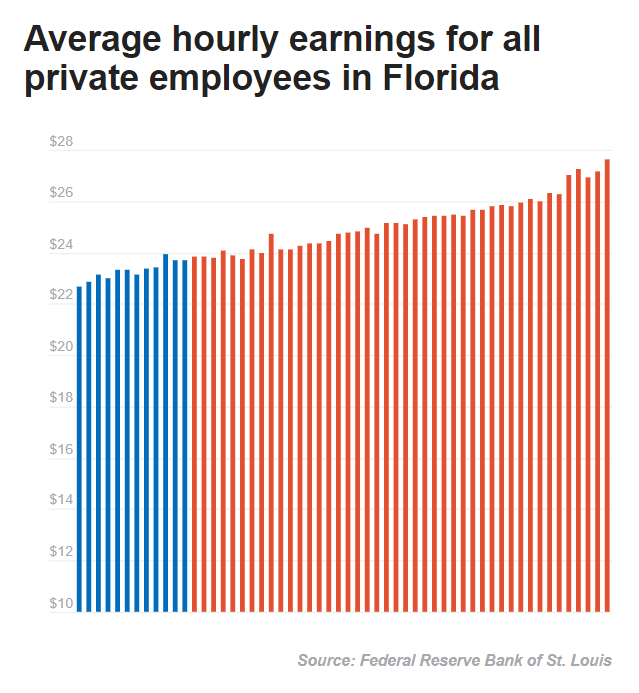 Between the first and second quarters of 2020, personal income in Florida rose by an impressive 5.8%. And just between March and August, another metric  ­— average hourly earnings for private-sector workers in Florida  ­— rose at about a 12% annualized rate, the fastest increase in years.

"Unemployment insurance benefits rose from an annual rate of about $28 billion a year in February 2020 to $1.4 trillion a year in June 2020," said Gary Burtless, an economist at the Brookings Institution in Washington, D.C. "Combined with the special stimulus payments from the Treasury, these more than made up for the drop in Americans’ personal earned income."

As for wages, they have risen because lower-paid workers were more likely to be laid off, furloughed, or assigned to reduced work schedules. That left payrolls stocked with employees who were relatively high earners; this kicked average earnings up a notch, Burtless said.

Making the "are you better off" question more complicated is that the pandemic-era statistics  are especially volatile. Combined with the uncertainty about the future course of the virus, it’s hard to draw firm conclusions about where the economy is headed.

"The estimates for 2020 are the U.S. Commerce Department’s best current projections given the preliminary income data available to us," Burtless said. "They’re likely to be revised, possibly with bigger corrections than usual, when we have near-final data." (On the other hand, fraudulent filings may be detected over time, and the government might be able to recover some of the wrongly allocated payouts.)

In addition, economists always caution that presidents of all stripes often get too much credit for good economies and too much blame for bad economies. While presidential policies do have an impact on economic activity, other issues that they have no control over — from the price of oil to changes in technology to the state of the international economy — have at least as much of an impact.

Reasonable people can disagree over how much blame Trump deserves for the state of the economy today. Still, on Reagan’s famous question, economists say there’s little doubt that, in the midst of the pandemic, the Florida economy, and that of the nation as a whole, is weaker than it was when Trump took office.

Email interview with Thomas Smythe, professor in the department of finance and economics at Florida Gulf Coast University, Oct. 5, 2020