Facebook posts
stated on January 12, 2022 in a post:
“India has nearly 1.4 billion citizens. Nearly 800 million of them live in extreme poverty — less than $1.90 per day. Yet EVERY singly (sic) Indian citizen is required to have a valid form of ID to vote in national elections.”

Indian women display identity cards as they wait to cast their votes at a polling station during the last phase of West Bengal state elections in Kolkata, India, on April 29, 2021. (AP)

• India requires citizens to have a valid form of identification to vote in national elections. But citizens must first enroll as new voters and be included on electoral lists.

• Reports indicate that some citizens — mostly minorities and women — have not been able to get their names added to the electoral lists or were removed from the lists, which means they cannot vote.

• An estimated 134 million people in India live on less than $2 per day; the post significantly overstates the number.

As voting rights legislation has taken center stage in the United States, social media posts point to other countries that require voter identification as a model for the U.S.

"India has nearly 1.4 billion citizens. Nearly 800 million of them live in extreme poverty — less than $1.90 per day. Yet EVERY singly (sic) Indian citizen is required to have a valid form of ID to vote in national elections," says a Jan. 12 post on Facebook. It continues, "What excuse does America have to not do the same?"

The claim came from Jovan Hutton Pulitzer, who pushed conspiracy theories about the 2020 presidential election.

The post was flagged as part of Facebook’s efforts to combat false news and misinformation  on its News Feed. (Read more about our partnership with Facebook.)

The post implies that a country with a large population and high poverty can require voter identification without disenfranchising voters. But it gets a fact wrong, and leaves out important context about voting in India and the debate over voter ID in the U.S.

The post significantly misstates how many people live in extreme poverty in India. An estimated 134 million live on less than $2 per day, not 800 million, according to Pew Research Center.

In India, citizens are required to have a valid form of identification to vote in national elections, which can include a voter ID card or other documents issued by the government, such as a passport, driver’s license or birth certificate.

But before they can vote, they must enroll as new voters and their names must appear on electoral lists, according to the Election Commission of India. Reports indicate that some citizens — mostly minorities and women — have not been able to get their names added to electoral lists or were removed from the lists, which means they cannot vote.

Indian citizens become eligible to enroll as new voters when they turn 18. The only citizens who are not entitled to be included on electoral rolls are "persons who are of unsound mind and have been declared so by a competent court or disqualified due to 'Corrupt Practices' or offences relating to elections," the government’s national portal says.

In practice, though, people are not always added to the electoral rolls when they register, sometimes without explanation; others are removed from the rolls without explanation, Foreign Policy magazine reported in 2019, after the last national election. 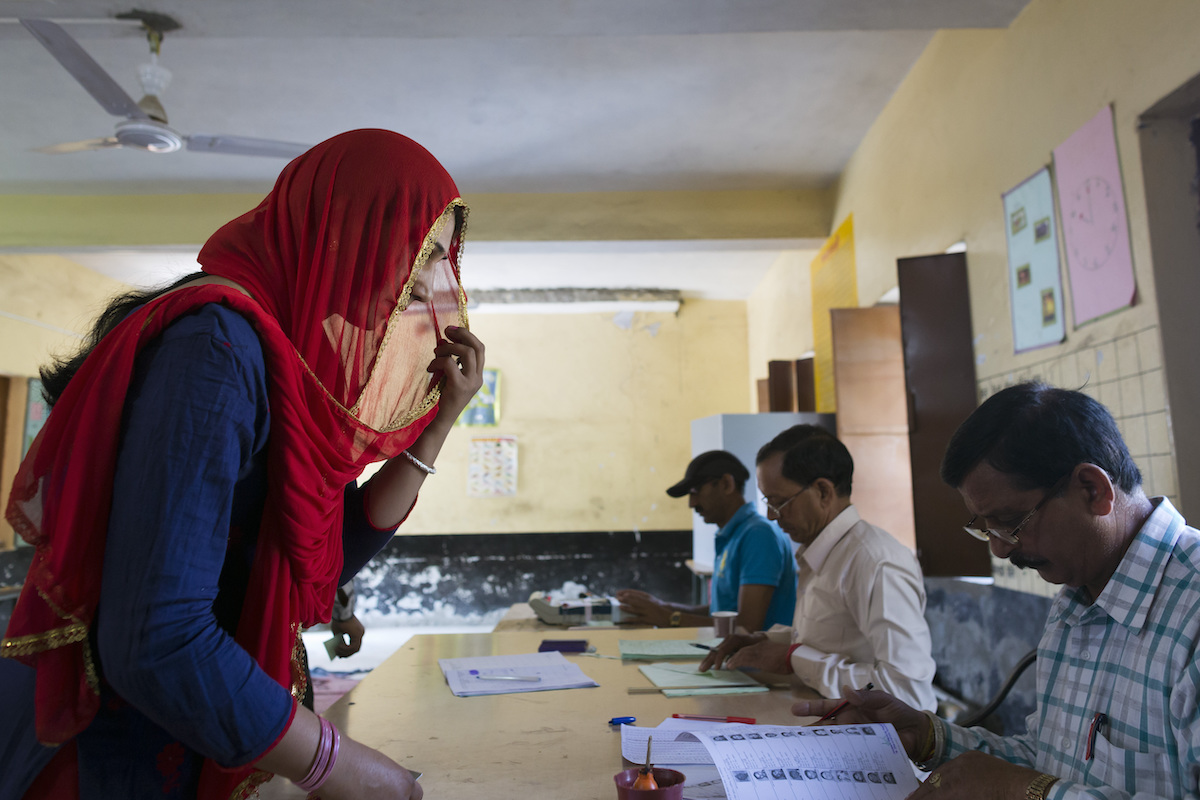 A polling official, right, checking the name of an Indian woman voter during the seventh and final phase of national elections in Dharmsala, India, May 19, 2019. (AP)

"India is often celebrated for its status as the world’s largest democracy, but relatively little attention is given to the fact that many citizens are denied the chance to vote," the magazine said. "The founders of Missing Voters, a smartphone app to track disenfranchised voters in India, estimated that nearly 120 million citizens were missing from voter lists in last May’s national election." Minorities and women make up a disproportionate number of the people missing from electoral rolls, the magazine reported.

Other researchers corroborated the report: "​​We find enough evidence that shows various problems in electoral rolls have become stumbling blocks preventing citizens from exercising their right to vote," they wrote in The Print, an Indian publication, during the 2019 election.

India had about 900 million eligible voters during the 2019 election, according to CNN. About 67% of those eligible cast a ballot in the 2019 national election, The Hindu newspaper reported, or around 603 million people.

The U.S. has no national-level ID requirement to vote, but 35 U.S. states have laws asking voters to show some form of identification at the polls, while the remaining states require other identifying information when voters cast ballots, such as a signature, according to the National Conference of State Legislatures.

What bothers some voting rights advocates is what’s in the mix of allowable options for acceptable IDs. In Texas and Tennessee, for example, gun permits are considered valid voter IDs, but student IDs are not. Critics say this makes it easy for gun owners, a heavily Republican group, to vote but harder for students, a predominantly Democratic group. Also, voters who lack government-issued IDs tend to be nonwhite.

Proposed legislation backed by Democrats would expand the range of acceptable IDs and provide a workaround for voters who don’t have an ID.

A Facebook post says, "India has nearly 1.4 billion citizens. Nearly 800 million of them live in extreme poverty — less than $1.90 per day. Yet EVERY singly (sic) Indian citizen is required to have a valid form of ID to vote in national elections. What excuse does America have to not do the same?"

The claim implies that a country with a large population and extreme poverty was able to implement a voter identification law without disenfranchising voters. But it errs in a couple of ways.

The post misstates how many people in India live in extreme poverty; the correct number is estimated at 134 million, not 800 million.

India has a national voter ID requirement, but the post leaves out important context about voting in the U.S. and India. In India, before casting a vote, citizens must enroll as new voters and be included on electoral lists. Reports have indicated that people are not always added to the rolls when they register, and others are removed from the rolls without explanation.

In the U.S., most states have an ID requirement for voting, and the rest require some type of identifying information.

The statement is partially accurate but leaves out important details, so we rate it Half True.

CNN, "The land of a million polling stations: India's general election by the numbers," March 11, 2019