Bjorn Lomborg
stated on September 3, 2021 in an column in the Wall Street Journal:
“The frequency of hurricanes making landfall in the continental U.S. has declined slightly since 1900...There aren’t more powerful hurricanes either.”

A satellite image of Tropical Storm Henri in the Atlantic Ocean. (NOAA via AP)

After President Joe Biden walked through a neighborhood devastated by the remnants of Hurricane Ida in Queens in New York City, he said the evidence is now clear that climate change "poses an existential threat to our lives."

"We’ve got to listen to the scientists and the economists and the national security experts," Biden said Sept. 7. "They’ve been warning us the extreme weather would get more extreme over the decade, and we’re living it in real time now."

A Wall Street Journal columnist wrote that when it comes to hurricanes, too much is made of the climate change effect.

"Atlantic hurricanes are not becoming more frequent," columnist Bjorn Lomborg wrote Sept. 3. "In fact, the frequency of hurricanes making landfall in the continental U.S. has declined slightly since 1900."

"There aren’t more powerful hurricanes either. The frequency of Category 3 and above hurricanes making landfall since 1900 is also trending slightly down," he wrote.

Lomborg is a Danish political scientist and president of Copenhagen Consensus Center, a Danish think tank. He has long questioned conventional wisdom on climate change, and his column said improving infrastructure would do more to save lives and property than cutting carbon emissions.

The idea that the U.S. is seeing fewer hurricanes, and fewer powerful ones as well, runs counter to the thrust of many news articles. It's fair to say that hurricanes sit in one of the knottier corners of climate change where the trends and underlying forces are tough to untangle. But Lomborg overstates the data.

Downward trend vs. no trend in frequency

Lomborg cites a 2018 article in the Bulletin of the American Meteorological Society that had a chart showing a slight decline in the yearly number of hurricanes that hit the U.S. 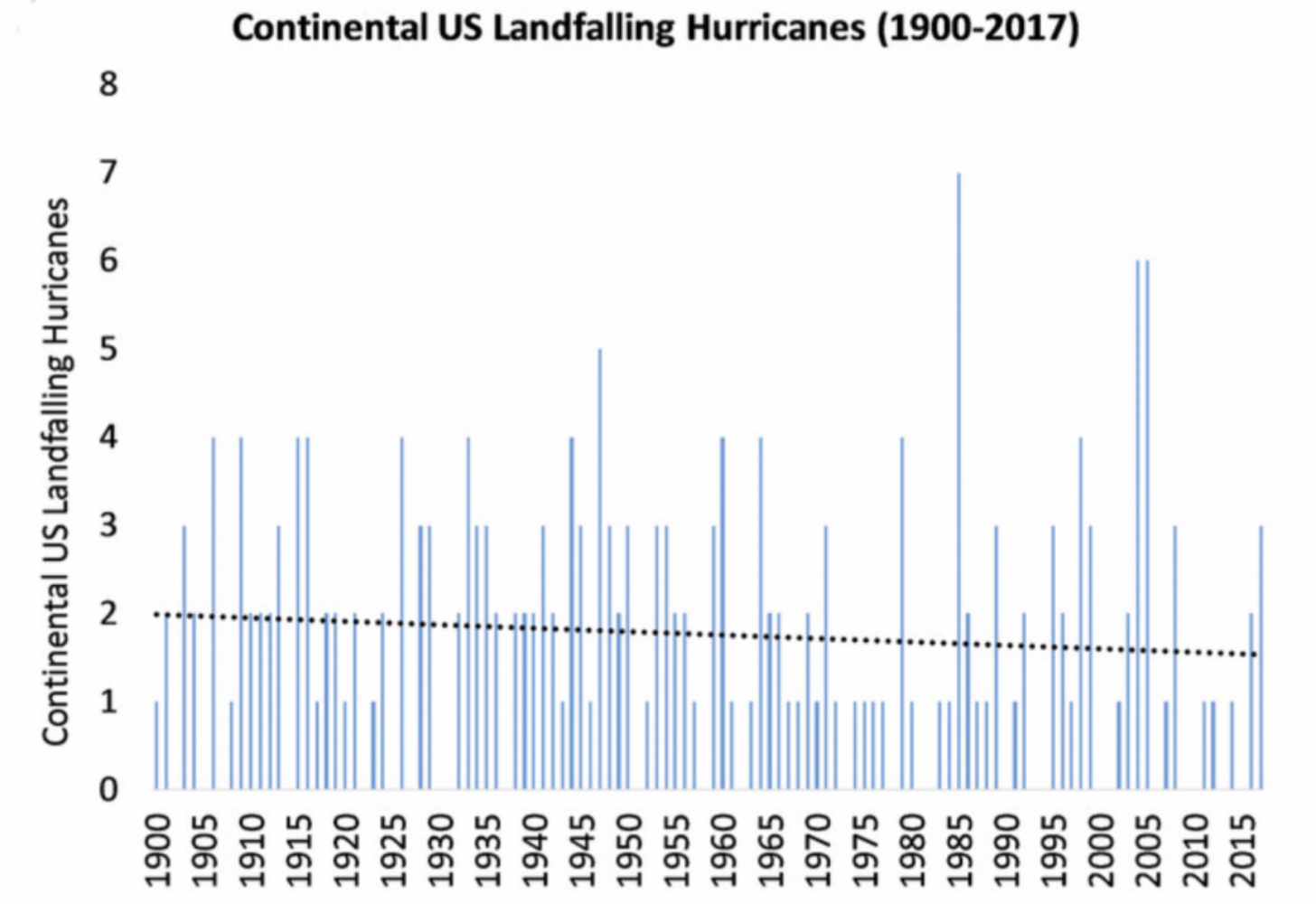 Chart of hurricanes making landfall in the U.S. since 1900 (© American Meteorological Society. Used with permission.)

Hurricane activity swings up and down, and the authors use a statistical device to create an overall trend line — the dotted line in the chart.

"I simply show the data of what actually has happened, as documented in the best, peer-reviewed papers, to contrast what many believe from listening to a media filled with hurricane reporting," Lomborg told us.

Lomborg’s data, though, is more ambiguous than first appears. The study’s authors note that their dotted line is not statistically significant.

One of the authors, Roger Pielke Jr., a political scientist in the University of Colorado’s environmental studies program, affirmed Lomborg’s claim about a slight decline. But he also said the latest U.N. report found "no trend in the frequency of U.S. landfall events."

A finding of "no trend" is not the same as finding a downward trend.

The decrease was not meaningful, said Christopher Landsea, National Hurricane Center’s chief of Tropical Analysis and Forecast Branch. Researchers in this field emphasize that looking back to 1900, there is no discernable trend, up or down.

"The main takeaway is that there's been no increase in U.S. hurricane numbers," Landsea said.

Lomborg relies on the same Meteorological Society article to say that the frequency of strong hurricanes — those rated Category 3 or higher — is trending slightly down. But again, the authors of that article said the trend wasn’t statistically significant.

With his focus on the havoc wreaked by hurricanes, Lomborg looked only at storms that made landfall in the U.S. But that approach omits a lot of storms from the study of climate change and tropical cyclones.

"One has to remember that only about 12% of all hurricanes occur in the Atlantic and only about a third of those make landfall in the U.S., so he is talking about roughly 4% of all hurricanes," said Kerry Emanuel, professor of atmospheric science at the Massachusetts Institute of Technology.

The murky world of hurricane data

The interplay of all the forces that produce hurricanes are complicated. There are a host of data problems in the historic record, which Lombard acknowledged. The further back you go, the greater the chance that some hurricanes went uncounted, even the ones that hit land. There’s a long-term naturally occurring fluctuation in the waters of the Atlantic that might affect the number of hurricanes — although researchers vigorously debate its role.

Many, though not all, researchers believe that from 1960 to 1980, aerosol pollutants likely counteracted global warming by reducing the sunlight that warmed the ocean. This would mask the impact of greenhouse gases on hurricane trends. When clean air legislation removed those pollutants, greenhouse warming came to the fore.

The U.N.’s International Panel on Climate Change wrote in its latest report that there has been an "observed increase in Atlantic hurricane activity since the 1970s." The report also said that there’s no consensus on what lies behind that.

Lomborg dismissed the idea that hurricane patterns have changed in the course of a century. But researchers looking at more recent periods, and more than just storms that hit the U.S., have the advantage of much more complete data than is available in the historic record.

A 2019 paper concluded that human-driven climate change likely made Atlantic hurricanes stronger. The authors analyzed changes in wind speed for storms between 1982 and 2009 and found "significant increases in tropical cyclone intensification rates in the Atlantic basin that are highly unusual."

To add to the complexity, climate change pushes hurricane trends both up and down.

Greenhouse gases have raised ocean temperatures. By itself, that would lead to more hurricanes. But James Kossin, a senior scientist with the analytics group The Climate Service and a researcher at the University of Wisconsin notes that the same greenhouse gas warming tends to stabilize the atmosphere.

"It suppresses the tropical thunderstorms that would ultimately strengthen to form tropical depressions and then tropical storms and hurricanes," Kossin said. "They can't get off the ground, so to speak."

Many models predict climate change will bring fewer hurricanes, which leads Kossin to minimize the importance of Lomborg’s argument.

"Concentrating on the continental U.S. landfall frequency record has become a bit of a cottage industry for anyone who wants to claim that hurricanes are not linked to climate change," Kossin said. "We're not sure that there will be more storms that form, and there may even be fewer that form, but when they do form, they are more likely to be very dangerous: stronger winds, higher storm surge, more rain and freshwater flooding, slower moving and more likely to stall."

Lomborg said that the frequency and strength of hurricanes hitting the U.S. had declined slightly since 1900. The small shift in some of Lomborg’s sources doesn’t amount to a statistically significant change over the past 120 years. Researchers broadly agree that given all the problems with the historic data, there is no discernable trend either way.

Studies of Atlantic storms since 1980, using more robust data, find that the hurricanes that form there tend to be stronger than in the past. Human-driven climate change might play a role, although the science is unsettled.

Lomborg focused on a limited number of hurricanes and pushed the data beyond what the research supports. We rate this claim Half True.

Proceedings of the National Academy of Sciences, Detected climatic change in global distribution of tropical cyclones, May 19, 2020

Nature Education, Aerosols and their Relation to Global Climate and Climate Sensitivity, 2013