Instagram posts
stated on May 19, 2021 in a post on Instagram:
“Businesses cannot legally ask for proof of vaccination and cannot deny entry based on vaccination status.”

An image appearing on Instagram and Twitter claims that businesses cannot legally require customers to provide proof of vaccination or deny entry based on vaccination status. The graphic cited the Fourth Amendment of the U.S. Constitution and Title III of the U.S. Civil Rights Act.

The image, which has been shared by several accounts as an informational resource and by others as an object of ridicule, goes on to claim that a business employee or owner that "violates your rights" could face life in prison or the death penalty. 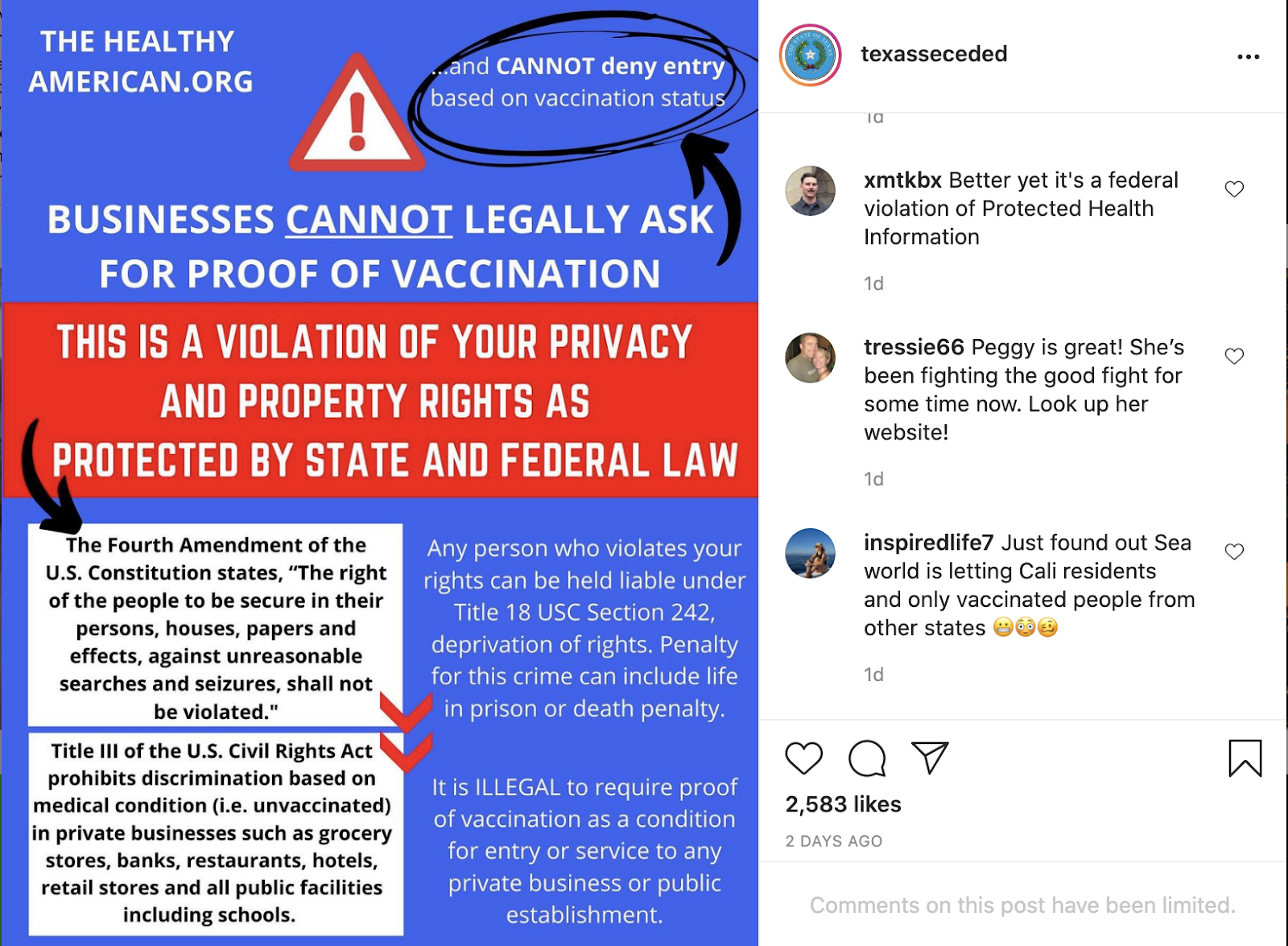 None of that is accurate, but nonetheless, the false information has been spreading.

On Instagram, the image was viewed more than 62,000 times in less than two days and received more than 2,600 likes as of May 24. It is credited to The Healthy American, a right-wing website run by anti-masker Peggy Hall of Orange County, California.

Facebook flagged the image as part of its efforts to combat false news and misinformation on its News Feed. (Read more about PolitiFact California’s partnership with Facebook.) We decided to find out whether the image’s claims are accurate.

What Are Your Rights?

Multiple states created a reopening framework that centers around requiring proof of vaccination for specific activities. California aims to fully reopen by June 15, but public universities across the state will require students to get the jab against COVID-19 to attend school next fall. Similarly, audience members at live entertainment venues are currently required to show proof of vaccination or a negative test result.

Although President Joe Biden has ruled out a federal vaccination passport, New York released its Excelsior Pass in March — the first in the nation. Hawaii is exploring a similar initiative. Other states, including California and Connecticut, likely won’t create a statewide passport but expect they could emerge from the private sector.

Several states have also voiced opposition to proof of vaccination requirements. In Texas, Idaho, Montana, Arizona, Florida and Utah, state officials have passed legislation or handed down executive orders that limit the use of vaccination passports. However, measures in those states only apply to government entities and state-funded organizations, not privately-owned businesses.

The latter is where we find the image claiming illegality.

The image cites the Fourth Amendment to support its claim that businesses cannot request proof of vaccination. The Fourth Amendment states that Americans have rights against "unreasonable searches and seizures" from the government, according to the Cornell Legal Information Institute. But asking a person for proof of vaccination does not constitute a search or a seizure, and private businesses aren’t government entities addressed in the amendment.

If a person refuses to disclose their vaccination status, a business cannot search their pockets or vehicle for proof they are vaccinated. However, it can ask for the information to be voluntarily disclosed. If it isn’t, a business has the right to refuse entry, according to Michele Goodwin, a professor of law at UC Irvine and director of the Center for Biotechnology and Global Health Policy.

"Businesses can establish standards for entry that do not violate statutory or constitutional provisions in a state or federal law," Goodwin said. "The Fourth Amendment applies to government."

"A community has the right to protect itself against an epidemic of disease which threatens the safety of its members," Justice John Marshall Harlan wrote in the majority opinion in the case.

The Civil Rights Act applies to all entities and prohibits discimination based on race, color, religion, sex and national origin. However, it does not address issues of discrimination based on disability or a medical condition. Besides these restrictions, a business is generally able to choose with whom it conducts transactions and make its own rules on private property. For example, some businesses hang signs that say, "No shirt, no shoes, no service."

Dorit Reiss, a professor of law at UC Hastings and a member of the Vaccine Working Group on Ethics and Policy, said the Americans with Disabilities Act (ADA) might apply in some situations surrounding vaccination requirements.

"The Civil Rights Act is an incorrect framework here," Reiss said. "The ADA may limit the ability to discriminate against people who have real contraindications, but it has to be an actual disability or limit [and] if there is one, the person is entitled to a reasonable accommodation, not necessarily to just walk in."

For instance, if someone is allergic to a component commonly found in vaccines, they may be unable to be fully vaccinated. In that case, businesses would need to provide reasonable accommodation by law. That might mean that unvaccinated customers can only enter a business if they wear a mask or are offered a virtual, no contact version of the service that the business provides.

"There is a difference between mandates that schools and businesses accommodate individuals with disabilities, such as appropriate ramps, bathrooms facilities, etc., and individuals who have or might have infectious diseases that threaten the health of employees and customers," Goodwin said.

The image also states that "any person who violates your rights" can be punished under Title 18 USC Section 242, a part of the federal criminal code that specifically addresses deprivation of rights. The law states that those acting "under the color of law" who willfully deprive a person in the United States of their Constitutional rights can go to prison, or, in extreme cases where the action causes the death of an individual, receive capital punishment.

Reiss said the code specifically pertains to officials who violate a person’s rights. It does not apply to private businesses or individuals.

"It's not relevant in this context," she said.

An image posted on Instagram and Twitter claimed that it is illegal for businesses to ask for proof of vaccination or deny entry to customers based on their vaccination status. Furthermore, the image alleged that business owners or employees who "violated your rights" could be held liable under a section of federal law that addresses deprivation of rights, which could result in life imprisonment or the death penalty.

Additionally, businesses can generally deny entry to unvaccinated customers, provided they offer reasonable accommodations for people who might be unable to receive a vaccine because of a disability, a medical condition or their religious beliefs. Experts say a reasonable accommodation does not necessarily mean the individual would be able to walk into the business or access their services in person.

Experts also say that the law cited as punishment applies to public officials, not private businesses. No business owner or employee who asks a customer for proof of vaccination would be imprisoned for life or face the death penalty.

Therefore, we rate this claim False.

Email interview with Michele Goodwin, a professor of law at UC Irvine and director of the Center for Biotechnology and Global Health Policy, May 21, 2021

Email interview with Dorit Reiss, a professor of law at UC Hastings and a member of the Vaccine Working Group on Ethics and Policy, May 21, 2021

The Los Angeles Times, Can your employer require a vaccination? Probably. So can a restaurant or hotel, April 8, 2021

CalMatters, Vaccine passports in California? Answers to your questions, April 8, 2021

USA Today, New York launches nation's first 'vaccine passports.' Others are working on similar ideas, but many details must be worked out, March 26, 2021

NBC News, These states are trying to ban or curtail the use of 'vaccine passports', April 21, 2021