Facebook posts
stated on April 24, 2021 in a Facebook post:
Social media posts stated: “Remember Kamala telling Joe during the debate, ‘You will do whatever the Chinese tell you! They gave your son over a billion dollars.’”

An image making rounds on Facebook, Twitter and other social media platforms claims Vice President Kamala Harris said during a 2019 Democratic debate that President Joe Biden would do "whatever" the Chinese government wants because they gave his son "over a billion dollars." 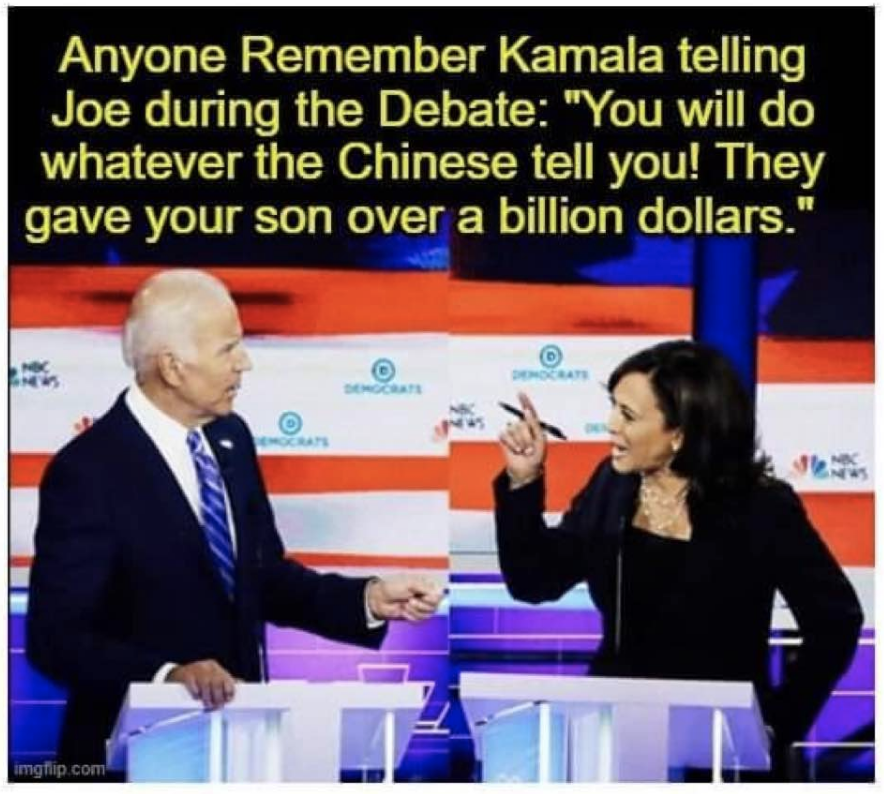 The image featured cropped and merged photos of Harris, who was a senator from California at the time, and Biden at the June 27, 2019, Democratic debate, which was held in Miami, Florida, and sponsored by NBC, MSNBC and Telemundo.

The way the images are cropped and combined depicts Harris and Biden standing face-to-face, by deleting U.S. Sen. Bernie Sanders, an Independent from Vermont, who was standing at his lectern between Biden and Harris at the debate.

Text above the photos reads, "Anyone remember Kamala telling Joe during the debate: ‘You will do whatever the Chinese tell you! They gave your son over a billion dollars.’"

There’s just one problem with the quote: According to transcripts of the Democratic debates, Harris never said it.

We decided to look at the false claim and where it came from.

Facebook flagged this image as part of its efforts to combat false news and misinformation on its News Feed. (Read more about PolitiFact California’s partnership with Facebook.) One Facebook user’s post featuring the image had been shared more than 400 times as of April 30. Another was shared 183,000 times. The image racked up more than 3.3 million views within 24 hours.

The claim and the transcripts

The image’s claim references allegations that swirled around Biden and his son, Hunter Biden, in the time leading up to the 2020 election. Hunter Biden had an investment deal that involved the Bank of China while his father was serving as vice president, which former President Donald Trump and other Republicans touted as an example of improper ethics and corruption.

Trump repeatedly stated that the business deal made the Bidens more than $1 billion. The business deal remains murky because of minimal disclosure requirements for international investments, and nobody has been able to independently verify how much Hunter Biden made off the deal.

In a previous fact check, PolitiFact found no evidence that either Joe Biden or Hunter Biden broke any laws, although experts in political ethics said the deal was unwise and put Joe Biden in an awkward position. Additionally, experts noted that relatives of high-ranking American public officials of both parties have routinely been courted by Chinese businesses.

During the first five Democratic debates, Harris never discussed any of the controversy surrounding the Bidens. Harris suspended her presidential campaign on Dec. 3, 2019, so she was not present for the six remaining Democratic debates.

Her only significant comment on China came during the Sept. 12, 2019, debate in Houston, Texas, when she was asked how her trade policy would differ from former President Barack Obama by moderator George Stephanopoulos of ABC.

"It's a complicated relationship," Harris said. "We have to hold China accountable. They steal our products, including our intellectual property. They dump substandard products into our economy. They need to be held accountable."

She added that the United States should also seek to partner with China "on climate and the crisis that presents" and "on the issue of North Korea."

Harris did occasionally spar with Biden on stage, most notably in the first Democratic debate on June 27, 2019, when she said she "wanted to speak on the issue of race" and criticized Biden for his "hurtful" comments surrounding prominent segregationists and his opposition to busing.

When Brown v. Board of Education was decided in the U.S. Supreme Court, the Berkeley Unified School District in Berkeley, California, implemented a busing program to integrate schools. Harris was part of the cohort that began kindergarten in the district during the second year of the program.

Harris drew praise for her "breakout" moment on stage during the debate, but her comments to Biden were entirely based around race and the history of segregation, not China or Hunter Biden.

We could find no evidence that Harris made any such statements elsewhere on the campaign trail. Her office declined to comment on the claim.

Additionally, no other candidate made similar statements attacking Biden over allegations surrounding his son and China during any of the Democratic debates. Former President Donald Trump did attack Biden over China during two presidential debates.

A search of the false quote turns up results dating back to January 2021. The earliest evidence of the quote on Facebook was posted on Jan. 24 and appears to have come from a page run by a group called Activated Patriots. The group protects "freedom, God and guns" and is based in Wisconsin, according to their website. 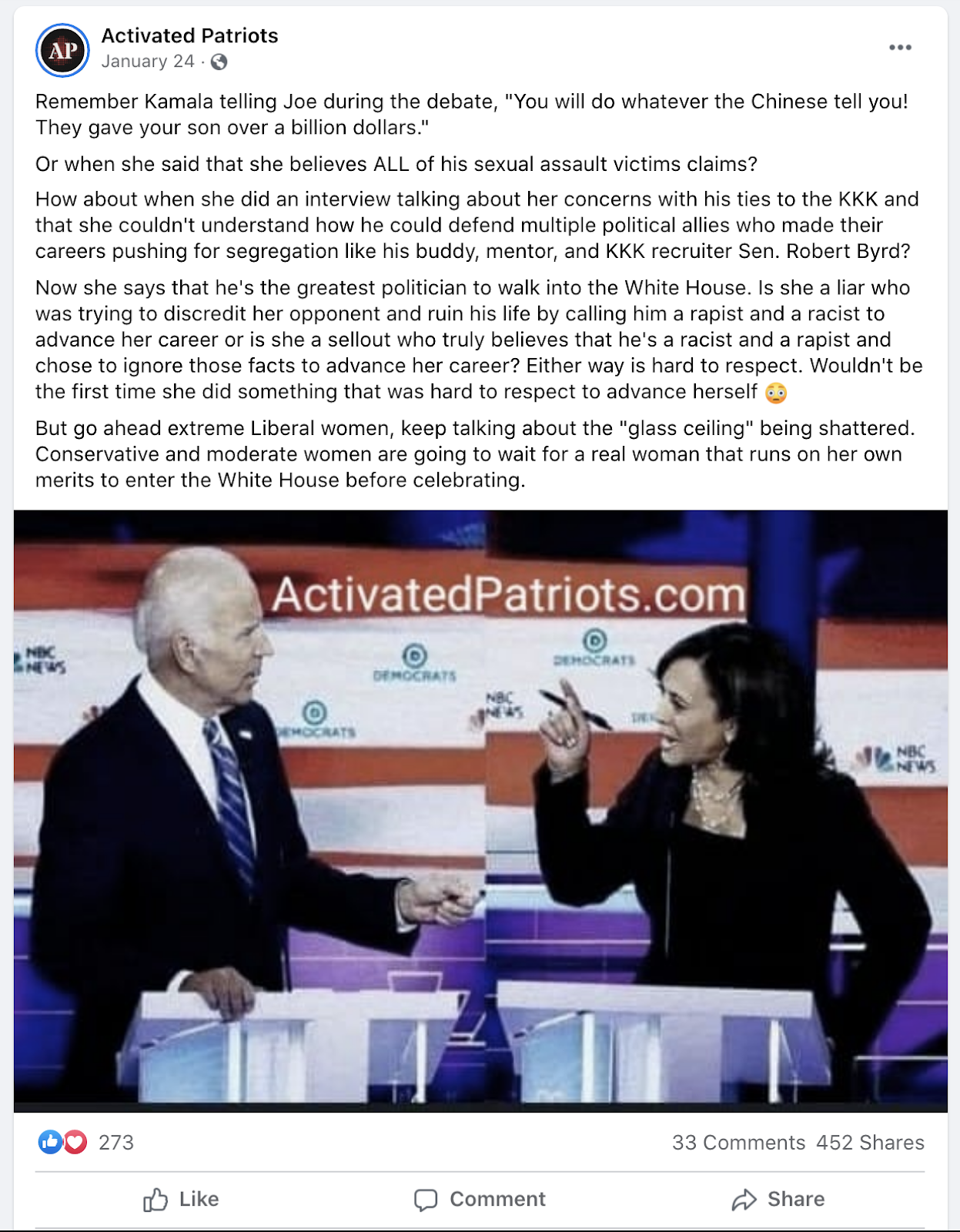 The Activated Patriots post included the false quote, but in the post’s text, rather than in an image. It also included additional statements mischaracterizing several of Harris’s comments during the Democratic debates and on the campaign trail during and after her presidential bid. On April 29, the post was deleted from the Activated Patriots page. It had been shared more than 450 times.

The false quote appears to have originated on Twitter on Jan. 23, less than 24 hours before the Activated Patriots post on Facebook, when @BlessUSA2024 tweeted it out.

The pro-Trump account was created in September 2019 and has more than 26,000 followers as of April 30. It has previously shared misinformation related to QAnon, a baseless conspiracy theory that claims there is a deep state run by political elites, business leaders and celebrities that engages in pedophilia and works against former President Donald Trump and his allies. 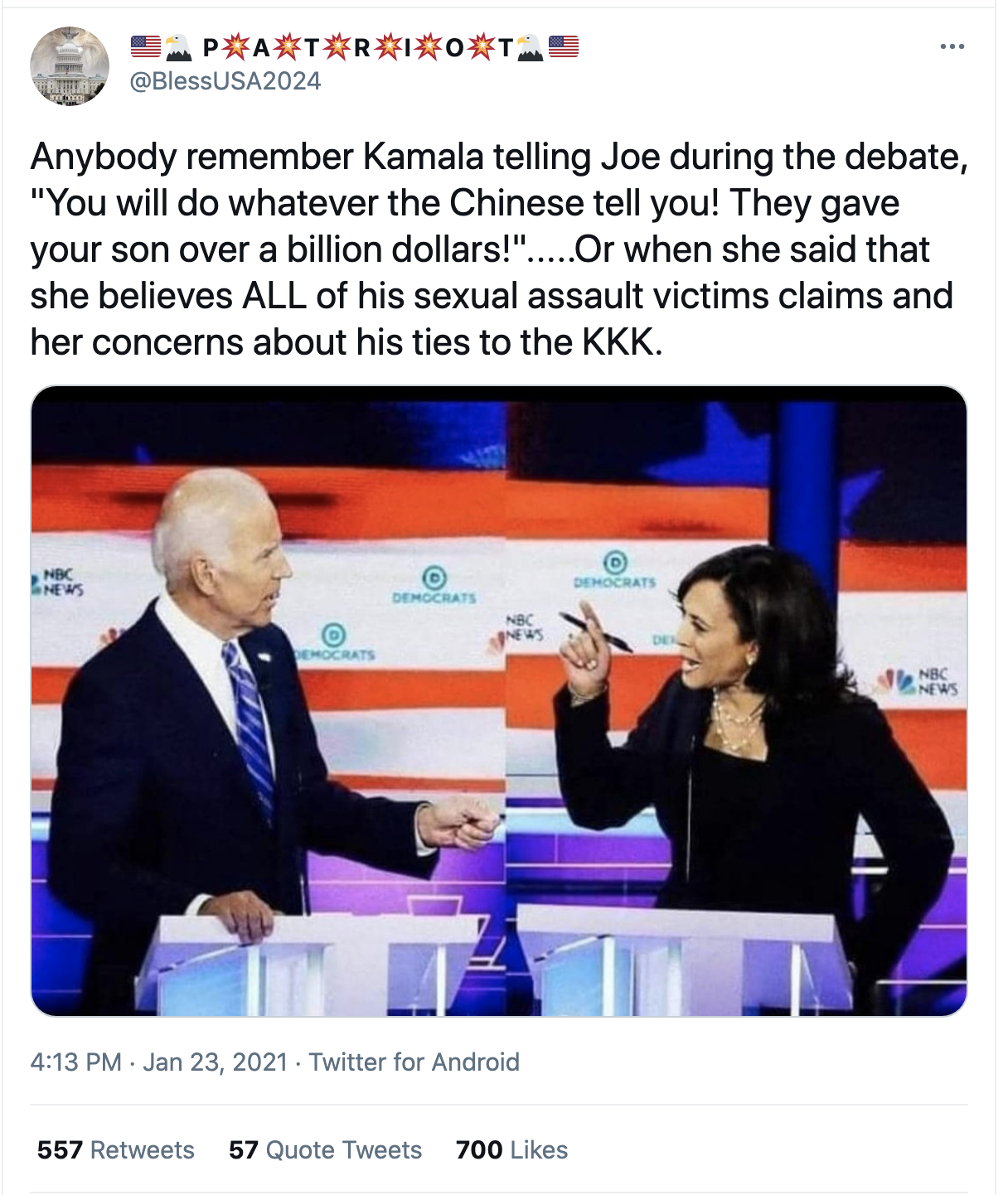 The tweet had received 700 likes as of April 30 and was retweeted more than 600 times.

Social media posts claimed that Vice President Kamala Harris told President Joe Biden during the Democratic debates, "You will do whatever the Chinese tell you! They gave your son over a billion dollars."

Transcripts of the debates show that this is wholly incorrect.

Harris never made such a statement and rarely touched on China during the debates. When she did, she did not reference the murky allegations surrounding Biden’s son and his business dealings with Chinese companies.

Harris made no such statements elsewhere on the campaign trail and none of Biden’s other competitors made similar comments.

Furthermore, the quote has not been substantiated by any reputable news organization and appears to have originated on social media from pro-Trump accounts.

Therefore, we rate this claim Pants on Fire.

PolitiFact, Hunter Biden and China: Sorting through a murky business deal, May 22, 2020