Facebook posts
stated on June 7, 2021 in a Facebook post:
Gov. Gavin Newsom has “no power or authority” to extend the state of emergency in California because it expired “automatically” on May 6, 2020.

Amid a game show backdrop, Gov. Gavin Newsom said early this month that California’s state of emergency is here to stay for now, even as the Golden State moved forward with its reopening plans. Days after the announcement, a prominent anti-mask activist from Orange County questioned whether the governor has the power to keep the emergency declaration in place.

A video on Facebook from Peggy Hall, a former teacher who runs the anti-mask and anti-vaccination website The Healthy American, claims that Newsom "has no power or authority" to extend the state of emergency and that the measure expired on May 6, 2020, 60 days after the governor first made the emergency declaration. 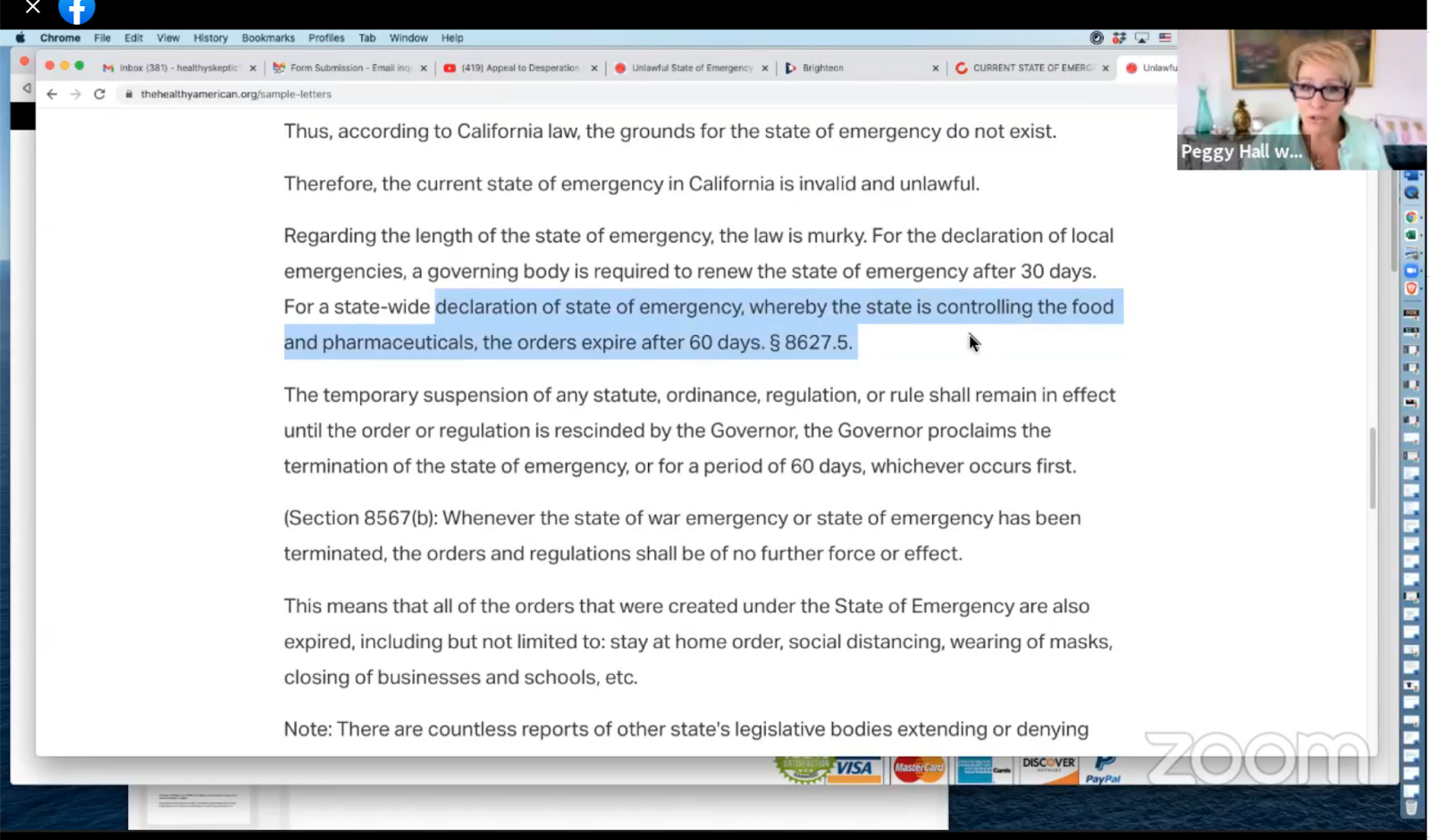 The video, which was initially posted live from Hall’s account, refers to Newsom — who’s running in a recall election — as "the Gavinor" and "the soon-to-be ex-governor of California." More than 8,000 people have viewed it on Facebook, which flagged the video as part of its efforts to combat false news and misinformation on its News Feed. (Read more about PolitiFact California’s partnership with Facebook.)

So does Newsom have the legal authority to extend California’s state of emergency, even with restrictions loosening across the state? We decided to find out.

The state of emergency in California

Put simply, a state of emergency is a government declaration that allows public officials to change usual operations and order actions to respond to an unfolding crisis. The declaration also helps the state government access federal aid, unlock certain state resources and work with county and local officials to coordinate emergency responses on a regional level.

When Newsom initially declared California’s state of emergency over the coronavirus, he said the measure would help the state prepare a robust healthcare response to the virus and curb outbreaks.

He used the declaration and the state’s public health authority to make face coverings mandatory within California and change government rules to allow things like to-go cocktails. Later in the pandemic, Newsom used the emergency declaration to set up the state’s tiered reopening system, color-coding counties based on their number of active coronavirus cases and positivity rate. He also used it to award more than 100 no-bid contracts, including some to companies that donated to his campaign, according to a CapRadio investigation.

How a state of emergency ends

"The authority to protect the public in times of health and safety threat has long been acknowledged and granted by the Supreme Court," said Michele Goodwin, a professor of law at UC Irvine and director of the Center for Biotechnology and Global Health Policy.

Section 8629 of the act, titled "Termination of state of emergency," states that the declaration should be ended at "the earliest possible date that conditions warrant."

Leslie Jacobs, a professor of constitutional law at McGeorge School of Law in Sacramento and director of the Capital Center for Law & Policy, said the decision to end a state of emergency is "largely left to the discretion of the governor." But she also noted that a state of emergency can be ended in two ways: by the governor or by concurrent resolution in the state Legislature. The latter is a type of legislation that is typically used to resolve issues or express the sentiments of both the California State Assembly and Senate.

"The governor does not have absolute power to determine when to terminate the emergency because section 8629 states the emergency may be terminated by concurrent resolution of the Legislature declaring it at an end," Jacobs said. "So, the two elected branches of the state government must agree that the emergency should continue."

There is also a check on Newsom’s power in the form of public opinion. Newsom has been criticized heavily by state Republicans for his response to COVID-19, fending off a lawsuit from two state lawmakers, and he will face a recall vote this year.

In her video, Hall cites section 8627.5 of the California Emergency Services Act, which states that "the temporary suspension of any statute, ordinance, regulation or rule" will remain in effect until the suspension is rescinded by the governor, the state of emergency is terminated or a period of 60 days has passed, "whichever occurs first." Hall said in an email to PolitiFact that there are "no grounds for the emergency according to law."

But that section of the law specifically refers to "nonsafety regulations" dealing with the delivery of food, pharmaceuticals and other necessities. Essentially, the section limits the amount of time Newsom can override local, county and state rules related to how supplies are distributed across the state – not how long a state of emergency can last.

Jacobs said a state of emergency can last far longer than 60 days provided Newsom feels that crisis conditions persist and a majority of the state Legislature agrees.

Why is Newsom keeping the state of emergency?

Newsom’s announcement that he will extend California’s state of emergency while simultaneously taking steps to loosen restrictions and reopen the state might seem counterintuitive, but experts say there are a number of reasons it might be advantageous for him to do so.

Jacobs said keeping the state of emergency allows Newsom to "remain nimble and able to respond to changes" as the pandemic progresses. Although vaccinations are now available for all California residents over the age of 12, roughly 45% of all Californians have yet to be fully vaccinated as of June 14.

If cases spike as the state reopens, the state of emergency will allow Newsom to reimpose restrictions if necessary.

"We’re still in a state of emergency," Newsom said on June 3. "This disease has not been extinguished."

"A number of declarations of emergencies related to fires and floods in recent years have extended beyond 60 days," Jacobs said.

Under the correct portion of the California Emergency Services Act, section 8629, Newsom has broad discretion to decide when the state of emergency should be lifted in California. Under the law, a state of emergency should be lifted at "the earliest possible date that conditions warrant." It can be ended by Newsom or by concurrent resolution in the state Legislature.

Legal experts say that many emergency declarations in recent years have lasted well beyond 60 days. According to experts, extending emergency declarations can help an area recover from a crisis because it enables state officials to continually adjust restrictions as needed and access state assets and federal aid.

It’s clear that Newsom has legal authority to extend California’s state of emergency for the COVID-19 pandemic. Therefore, we rate this claim False.

Email interview with Leslie Jacobs, professor of constitutional law at McGeorge School of Law in Sacramento and director of the Capital Center for Law & Policy, June 11, 2021

Email interview with Michele Goodwin, a professor of law at UC Irvine and director of the Center for Biotechnology and Global Health Policy, June 16, 2021