Facebook posts
stated on June 21, 2021 in a post on Facebook:
Says President John F. Kennedy said, “There are people in Washington, D.C., in positions of power to whom the border is just a nuisance, and I think some of them believe that illegal immigration is a moral good. It is not.”

John Kennedy was an eloquent orator whose quotations live on to this day. You probably remember some of them.

"Do not pray for easy lives, pray to be stronger men."

And, of course, who could forget: "There are people in Washington, D.C., in positions of power to whom the border is just a nuisance, and I think some of them believe that illegal immigration is a moral good. It is not.

Wait, what about that last one?

A liberal lion who died nearly 60 years ago talking with a decidedly conservative tone?

Yep, says a post from the Standing For Freedom Center, which meme-ified the quote with a picture of the former president. It added this caption: "Illegal immigration is just that: illegal. It undermines what it means to be an American citizen and it threatens the well-being of the Americans already in our borders. We must not believe the left when they say that illegal immigration is good for our country."

The Standing for Freedom Center is part of Liberty University, a conservative college in Virginia. In this case, the center could have used a class in fact-checking.

The quote is definitely Kennedian … just not that one.

It was made by U.S. Sen. John Kennedy, a Republican from Louisiana, in 2019 during an interview with Fox News. The video is still attached to this story, so you can see it for yourself. The Louisiana Kennedy is not related to the former president. 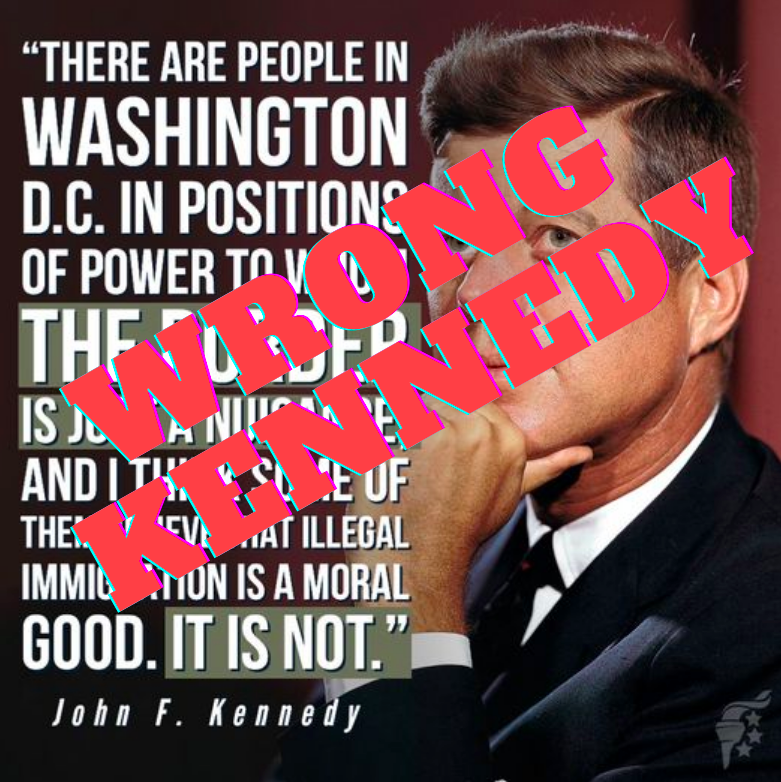 As for John F. Kennedy, immigration was an important issue to him. His final book, published posthumously, was called "A Nation of Immigrants." In it, he writes, "Everywhere immigrants have enriched and strengthened the fabric of American life."

The Standing for Freedom Center has the wrong man. We rate the post False.