• Recent census data from the University of Virginia’s Cooper Center shows that about 70 percent of the U.S. population will live in the 15 largest states in 2040.

• PolitiFact has shown previously that concerns that the population shift will change the balance of power in Washington, D.C., are overstated.

He linked his comment to an article, "Rural America’s Population Loss Stems from Outmigration, Not Deaths," by The Daily Yonder.

The U.S. Census Bureau defines domestic migration as the movement of people within the nation’s boundaries, from one state to another, while international migration refers to the movement across the boundaries.

"My view of that is that when you look at our democracy, the amount of influence smaller populated states will have by 2040 is going to increase dramatically, where more populated states won’t have the same weight," Scholten said in an interview with PolitiFact Iowa.

PolitiFact checked the balance of power question earlier this year and found those concerns to be overstated. But, while we cannot fact-check whether or not something in the future will happen, we can check on whether or not Scholten cites credible population projection data.

Scholten said his tweet is based on a 2017 Wall Street Journal column, "The Varied—and Global—Threats Confronting Democracy," by Gerald Seib. Seib wrote that David Birdsell, a political communications scholar and provost and senior vice president of Kean University, noted that by "2040, about 70% of Americans are expected to live in the 15 largest states."

In an interview with PolitiFact Iowa, Birdsell, who made his projection while at Baruch College, said figures he quoted for Seib’s article referenced U.S. Census Bureau data analyzed by the Weldon Cooper Center for Public Service at the University of Virginia. But while the data are a few years old, they still generally hold up in 2021, he said.

Joe Brown
stated on April 18, 2012 in a City Council presentation on the Memphis budget.
"Nobody is leaving Memphis. That's a myth."

The Cooper Center used the most recent population estimates and U.S. Census Bureau data to examine expected changes between 2020 and 2040, the center’s website said.

For analyzing Scholten’s tweet, that means the Cooper Center’s most recent data can have a margin of error, but is still providing comparable projections since 2017, according to The Cooper Center.

According to a Cooper Center article "National Population Projections: 2020, 2030, 2040" by Shonel Sen, research and policy analyst for the Demographics Research Group, the top 10 largest states have been "projected to remain the same across the decades since 2010."

Data show that some southern states, like Georgia and North Carolina, are gradually growing because the states have younger populations. Meanwhile, populations in smaller states, like Vermont and West Virginia, would be expected to decrease consistently, largely because of people there are aging, the Cooper Center reports. "California, Texas, Florida and New York continue to dominate the population size charts, with more than a third of the future U.S. population residing in one of these four large states," Sen wrote.

According to calculations by PolitiFact using U.S. Census Bureau data and population projections from the Cooper Center, an estimated 67.2 percent of the U.S. population will live in the 15 largest states in 2040. 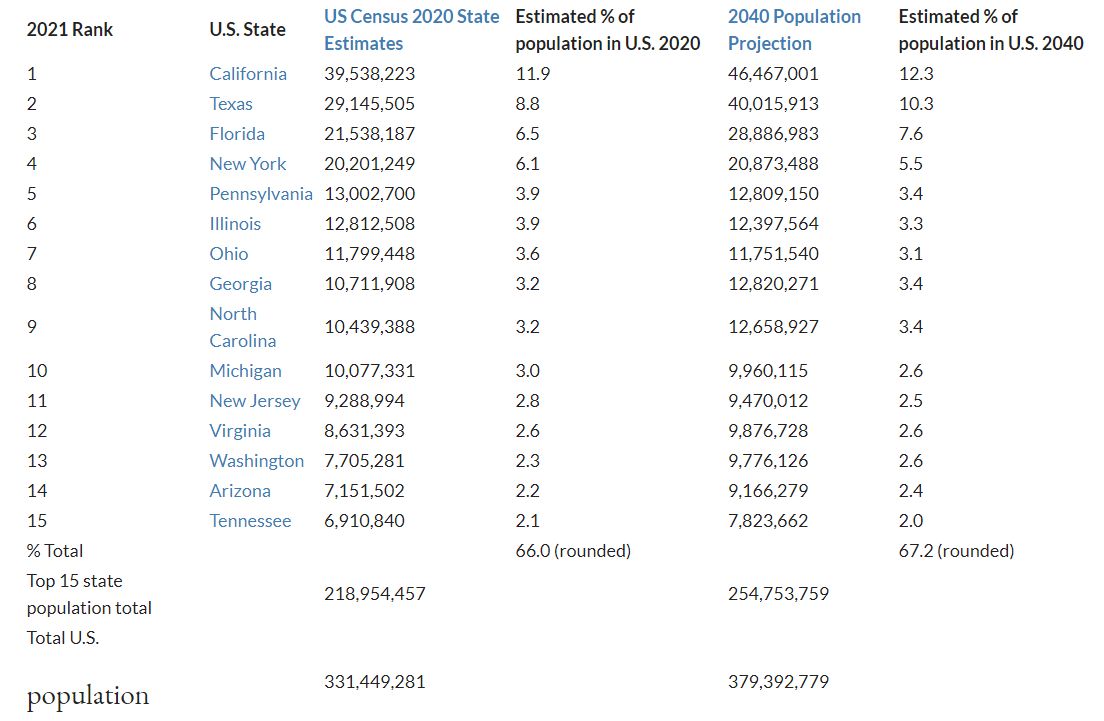 The Cooper Center, the catalyst for Scholten’s tweet, has a credible history of national population predictions with small error margins. The center’s data projects that an estimated 67.2 percent of the U.S. population will live in the 15 largest states in 2040, which is close to Scholten’s 70 percent.

Adding in the uncertainty inherent in any projection, that’s enough to rate this claim Mostly True.

Cindy Axne
stated on September 18, 2022 a tweet:
"I was named Iowa’s most bipartisan member of Congress by @TheLugarCenter.”

Randy Feenstra
stated on October 5, 2021 a tweet:
The Biden administration "published a study concluding 4 (of) 5 new cars on the road by 2050 will still require liquid fuels."

Kedron Bardwell
stated on May 20, 2021 a tweet:
"These 2 Ankeny moms standing next to the Governor are known Qanon and anti-vaxx conspiracy theorists."