Russell James Ramsland Jr.
stated on November 24, 2020 in an affidavit:
In 10 Michigan precincts, voter turnout reached 100% and in 6 precincts it surpassed 100%

Voters wait in line to fill out a ballot on the last day of early absentee voting before the general election at the Northwest Activities Center in Detroit, Monday, Nov. 2, 2020. (AP)

A lawsuit is asking a federal court in Michigan to force state leaders to disregard Michigan’s certified election results and award its 16 Electoral College votes to President Donald Trump. It includes an affidavit that makes wildly inaccurate claims about voter turnout in Michigan cities and townships.

The affidavit comes from Russell James Ramsland Jr., a cybersecurity analyst and former Republican congressional candidate. Ramsland is the one who mistook voting jurisdictions in Minnesota for Michigan towns in a separate flawed analysis of voter turnout. His latest analysis correctly names Michigan voting jurisdictions, but similarly arrives at inaccurate voter turnout rates.

For instance, Ramsland claims that Detroit saw a turnout of 139.29%. The city’s official results show that turnout in the city was actually 50.88% of registered voters.

When asked about the error in Ramsland’s affidavit, Gregory Rohl, the attorney representing the plaintiffs in the federal lawsuit in Michigan, said he and his team would investigate the data. "I’m always willing to learn and surely want the facts set forth to be accurate in any filing bearing my name," Rohl wrote in an email to PolitiFact Michigan.

Ramsland’s analysis gained public attention when a witness shared its inaccurate findings during a state House Oversight Committee hearing in Lansing Wednesday. During the hearing, Rudy Giuliani, Trump’s personal attorney, brought a number of witnesses to share allegations of election fraud and misconduct already discredited by election officials and in court. The witnesses included Col. Phil Waldron, who says he’s part of a team that looked into "election manipulation." He claimed that "publicly available information" from Michigan analyzed in an affidavit shows excessive voter turnout that indicates election fraud. But the numbers do not square with the statement of votes cast from Michigan counties.

A chart included in Ramsland’s affidavit lists 21 Michigan cities and townships, five of which are alleged to have recorded a turnout above 90% in November’s election, while 10 purportedly saw turnout of exactly 100% and six surpassed 100%. 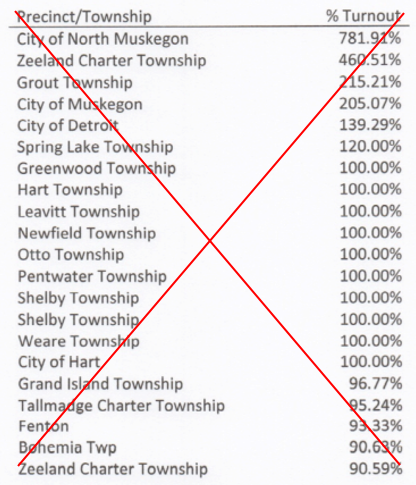 It is difficult to imagine that a turnout rate above 100% — let alone 782% in the City of North Muskegon or 461% In Zeeland Charter Township — would have escaped election officials compiling the statement of votes cast. But beyond the implausible turnout rates Ramsland alleges, there are other glaring problems with the list. Shelby Township is named twice. So is Zeeland Charter Township, with two vastly different turnout rates: 90.59% and 460.51%. Ramsland lists "Fenton" without specifying Fenton City or Fenton Township. But the turnout Ramsland lists for Fenton does not match the turnout in either jurisdiction.

The actual turnout statistics reveal the inaccuracy of Ramsland’s numbers. His figure for North Muskegon is off by a factor of 10: The actual number is 78.11%, not 781.91%. For Zeeland Charter Township, he inflated the turnout nearly sixfold. For Grout Township and the City of Muskegon, his number is more than triple the correct number.

There is one location where the actual turnout matches the turnout Ramsland lists: Grand Island Township, a tiny municipality split between an island in Lake Superior and a stretch of the Upper Peninsula’s mainland. Turnout there was 96.77%, according to the official record, as 30 out of the township’s 31 registered voters cast a ballot in November’s election.

In a second affidavit Ramsland filed in the same lawsuit Dec. 3, he said that the information source for his first affidavit was data from the state’s open data portal and Secretary of State’s election results page "that no longer exists."

The Secretary of State's office never shared township, city or precinct turnout data on its results page, according to Tracy Wimmer, a spokesperson for the office.

Ramsland’s new list also showed 33 voting jurisdictions with turnout between 86.79% and 96.77%. An initial review indicated many of these turnout rates are accurate. Michigan had record turnout statewide. President-elect Joe Biden carried the state by more than 154,000 votes.

An affidavit filed in a lawsuit in Michigan seeking to overturn the election purports to show turnout rates in Michigan that indicate election fraud.

Louis Jacobson contributed to this report.

The Office of the Secretary of State Jocelyn Benson, 2020 Michigan Election Results, accessed 12/4/20

Tracy Wimmer, spokesperson for the Office of the Secretary of State, text message, 12/4/20

Citizens to Support MI Women & Children
stated on October 18, 2022 a tweet:
If Proposal 3 passes, it would allow children to undergo "gender-change therapy without parental consent"

Jocelyn Benson
stated on May 20, 2021 a campaign fundraising email:
A Republican bill in Michigan “would make it a crime for election officials … to share information about how to vote by mail and where to find a ballot drop box.”

Michael MacDonald
stated on March 24, 2021 a statement:
Michigan election bills are “designed to make it easier for people to vote.”

Mike Shirkey
stated on February 16, 2021 a radio interview:
“Too many dead people voted” in Michigan

Garlin Gilchrist
stated on January 17, 2021 a speech at MLK Day Jr. Youth Conference:
In Michigan, “we were able to really flatten” the racial disparity in COVID-19’s impact “and make significant progress.”

Donald Trump
stated on December 15, 2020 a tweet:
“68% error rate in Michigan Voting Machines. Should be, by law, a tiny percentage of one percent.”

Russell James Ramsland Jr.
stated on November 24, 2020 an affidavit:
In 10 Michigan precincts, voter turnout reached 100% and in 6 precincts it surpassed 100%

Mike Duggan
stated on November 29, 2020 an interview:
“Detroit actually has the lowest infection rate in the state of Michigan. We’re half of that of the surrounding suburbs.”