Josh Kaul
stated on August 15, 2019 in a tweet:
Says people convicted of felonies or under restraining orders "can buy a firearm without going through a background check."

In this Jan. 19, 2016 file photo, handguns are displayed at the Smith & Wesson booth at the Shooting, Hunting and Outdoor Trade Show in Las Vegas. (AP Photo/John Locher)

Gun control is yet again — tragically — up for debate in Wisconsin.

After mass shootings at an El Paso Walmart and a Dayton, Ohio, entertainment district left 31 dead, Wisconsin leaders have raised questions about "loopholes" in state law.

Democratic lawmakers introduced legislation in August 2019 that would require background checks for nearly all gun sales. Gov. Tony Evers, a fellow Democrat, has threatened to call a special session on the matter if Republican legislative leaders don’t take up the bill.

This comes as 80% of state residents support universal background checks — including 75% of gun owners — according to a Marquette University Law School Poll conducted in mid-August.

So how is that different from what Wisconsin has now?

"Because we don’t have universal background checks, people who are a danger to others — including people who have been convicted of a dangerous felony or are subject to a domestic violence restraining order — currently can buy a firearm without going through a background check," Josh Kaul said in an Aug. 15, 2019, tweet.

Can someone in those circumstances really purchase a gun without a background check?

Most gun buyers go through a background check

A convicted felon, or someone with an active restraining order connected to domestic violence, would not pass a criminal background check to qualify for a firearm purchase.

Such background checks are required under federal law for any purchase of a firearm from a Federal Firearm Licenses dealer — which would include any retailers or others engaged in gun sales as a profession.

This two-pronged system covers the "vast majority" of firearm purchases in the state, Kaul said in an Aug. 9, 2019, appearance on Wisconsin Public Television’s "Here and Now."

Gavin Newsom
stated on January 23, 2023 in a tweet
“The USA has a gun homicide rate 26 times higher than our peers.”

This is the process gun rights advocates refer to when noting background checks already exist.

But it’s not the only way to buy a gun.

A 2015 study found 22% of gun owners bought their most recent firearm without going through a background check.

That’s because gun sales in Wisconsin between private parties (those without a federal firearms license) aren’t subject to reporting, waiting period or background check requirements.

The U.S. Bureau of Alcohol, Tobacco, Firearms and Explosives does not regulate private sales as it does those involving dealers. And Wisconsin is one of 29 states that does not impose any state-level regulations either, according to the Giffords Law Center to Prevent Gun Violence, a research and advocacy organization that seeks "laws, policies, and programs proven to save lives from gun violence."

Websites such as Armslist — a Craigslist-style firearms marketplace — connect private sellers and are heavily used. A search in September 2019 showed more than 2,000 firearms for sale from private parties in Wisconsin. 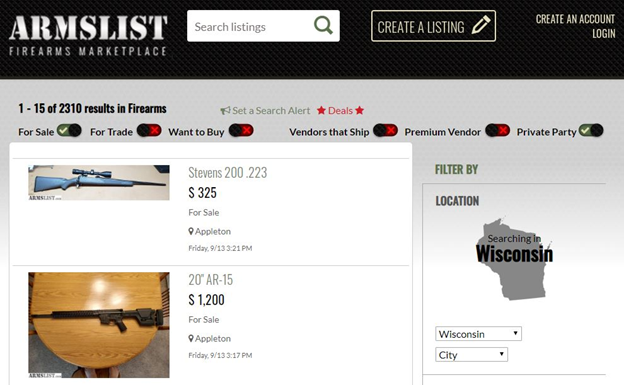 Two guns used in high-profile shootings here were purchased through Armslist by people under court orders not to possess guns.

In October 2012, Radcliffe Haughton killed three people including his estranged wife and injured four others, before killing himself at Azana Salon & Spa in Brookfield. A day before the shooting he purchased a .40-caliber handgun in the parking lot of a Germantown McDonald’s after connecting with the seller on Armslist. Two days before that, a judge had issued a restraining order that barred Haughton from owning a gun.

In January 2018, Robert Schmidt bought a Glock 9 mm handgun from a 19-year-old man through Armslist, days after he was released from the Calumet County jail on a bond that prohibited him from having a gun. The transaction took place in a Walmart parking lot. Schmidt was charged at the time with raping his wife at gunpoint. The next night he used that gun to kill his wife and then himself at a home just outside Appleton.

Kaul said felons and people subject to domestic abuse restraining orders are currently able to buy guns in Wisconsin without going through a background check.

All purchases from firearms dealers are subject to state and federal requirements that include a criminal background check. But Kaul is right that Wisconsin is among the states with no oversight of gun sales between private parties.

That has allowed people in the circumstances he described to buy guns, in some cases with tragic results.

Wisconsin Public Television, "Here and Now," What Can Wisconsin Do in the Wake of Mass Shootings?, Aug. 9, 2019

U.S. Bureau of Alcohol, Tobacco, Firearms and Explosives, Questions and Answers, What recordkeeping procedures should be followed when two unlicensed individuals want to engage in a firearms transaction?, Aug. 31, 2015