In this Friday, June 17, 2016 photo, homeless man David Brophy, right, talks to People Assisting The Homeless (PATH) outreach team members who are helping him acquire an ID card on a street near where he lives in Los Angeles. (AP Photo/Richard Vogel)

As California’s affordable housing crisis deepens, so does the state’s related and often intractable problem: homelessness.

Candidates for governor made numerous assertions about the scale of California’s homeless population on March 8, 2018 during a housing forum in Sacramento.

The state has wrestled with this topic for decades, but has homelessness really "skyrocketed"? And how does its per capita and overall homeless population compare with other states?

We set out on a fact check.

We found answers in a December 2017 report by the U.S. Department of Housing and Urban Development: The 2017 Annual Homeless Assessment Report (AHAR) to Congress.

Sharon Rapport, associate director for California policy at the Corporation for Supportive Housing, described the report as "the most authoritative" resource on the topic. CSH is a national organization that develops housing policy and makes housing loans.

She noted the HUD report is a snapshot of how many people are homeless at any given time. Her organization estimates the number of people who are homeless for at least part of a year is two to three times higher than any point-in-time tally.

Has homelessness ‘skyrocketed’ in California?

The report shows California’s homeless population jumped nearly 14 percent from 2016 to 2017 — to a total of more than 134,00 people. It rose nearly 9 percent over the previous seven years.

That’s much different than the national picture. While the national homeless population ticked up about 1 percent in 2017, it remained 13 percent lower than in 2010, according to an NPR analysis following the report’s release.

Notably, the rise statewide and nationally in 2017 was attributed to a surge in the number of people living on the streets in Los Angeles and other West Coast cities, at least in part due to a shortage of affordable housing.

Compared to the nation’s relatively small increase, Allen is on track when he says California’s homeless population has "skyrocketed."

How would Allen tackle the problem?

"We need more state run mental institutions," the lawmaker said at the forum.

The institutions would offer the homeless substance abuse and psychiatric services, he said, "so they can get back on their feet and re-enter the workforce." 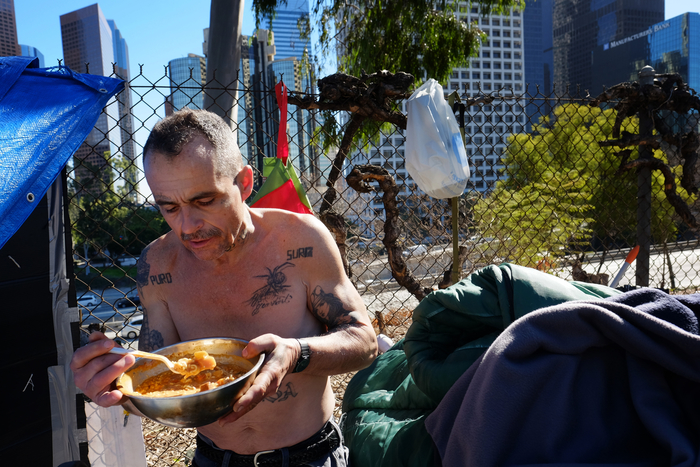 This Tuesday, Jan. 26, 2016 file photo Eddie, 51, a homeless man who would only give his first name and lives in a tent on the street in downtown Los Angeles. (AP Photo/Richard Vogel)

Does California have the nation’s highest homelessness rate?

On this point, Allen is slightly off target.

While the 2017 HUD report shows California’s per capita homeless rate is high, it’s not the highest.

California has the third highest rate nationally with 34 in every 10,000 people in the state experiencing homelessness.

Two states are worse off: New York and Hawaii.

Does California have the highest homeless population in the nation?

"California does have the highest homeless population in the nation according to the (HUD report), but not the highest rate of homelessness. As a state, our per capita rate is amongst the highest, but it is not the highest," Rapport, of Corporation for Supportive Housing, summarized in an email.

A December 2017 report by the U.S. Department of Housing and Urban Development is considered the authority on state-by-state homeless counts, and shows Allen got two of his three points correct.

Meanwhile, the report showed two other states, Hawaii and New York, have a higher per capita homeless rate than California’s.

Looking at Allen’s statement in sum, he was on the mark twice and only slightly strayed from the facts on the per capita claim.

For that reason, we rate his overall statement Mostly True.

UPDATE: After publication, we received an email from a spokeswoman for Travis Allen. To support the statement, she cited an Assembly Housing and Community Development Committee Analysis of AB 2161 showing "California experienced the largest increase in the number of residents experiencing homelessness – over 16,000 individuals" from 2016 to 2017.