On the campaign trail, Donald Trump honed his craft of slamming media organizations that covered him critically, a practice he’s carried over to the White House.

His efforts will culminate soon in the so-called "fake news awards," an idea Trump first floated last November on Twitter.

"We should have a contest as to which of the Networks, plus CNN and not including Fox, is the most dishonest, corrupt and/or distorted in its political coverage of your favorite President (me). They are all bad. Winner to receive the FAKE NEWS TROPHY!" he tweeted Nov. 27, 2017.

We should have a contest as to which of the Networks, plus CNN and not including Fox, is the most dishonest, corrupt and/or distorted in its political coverage of your favorite President (me). They are all bad. Winner to receive the FAKE NEWS TROPHY!

Experts who practiced government ethics at the highest levels told us the fake news awards could land White House staffers in hot water, for violating government rules and encroaching on the First Amendment.

Eisen, now chair of the Citizens for Responsibility and Ethics, referred to a set of federal regulations that lay out the ethical conduct of executive branch employees. (As Eisen noted, Trump, as president, is exempt.)

These rules are overseen by the U.S. Office of Government Ethics, or OGE, an executive branch agency whose 4,500 ethics officials serve as watchdogs over the executive branch to prevent (or resolve) conflicts of interest, with the aim of safeguarding governmental integrity.

Because of that rule, the ethics office also has long considered it improper for an executive branch employee to condemn a company, said Walter Shaub, who led the OGE until his resignation in July 2017.

"You can't use your government position to endorse a company, and you can't trash a company to the advantage of a different company," said Shaub, who is now the senior director of ethics at the Campaign Legal Center.

It's unclear if Trump’s event is being held by the White House or the Trump/Pence campaign, and neither organization replied to our questions. (Eisen's tweet — and this analysis — deals with official government events. A separate set of laws, including the Hatch Act, would apply if White House staffers participated in a campaign event, sources said.)

"Hey @PressSec & @RajShah45, Norm is right. If you or ANY WH staffers work on this or post it on the WH website, it will be a violation of the Standards of Conduct. Beware of laws on using federal appropriations too, if there are any visuals, certificates, handouts, or trophies," Shaub tweeted Jan. 7.

Hey @PressSec & @RajShah45, Norm is right. If you or ANY WH staffers work on this or post it on the WH website, it will be a violation of the Standards of Conduct. Beware of laws on using federal appropriations too, if there are any visuals, certificates, handouts, or trophies. https://t.co/3tlyrkNc9H

Shaub told PolitiFact that a staffers' participation in an official Trump administration event designed to publicly humiliate certain media outlets would clearly constitute a misuse of their government position.

"It’s not even a close call," he said. "Sending out tweets talking about how great Fox News is, which is a business, and now he’s going to give awards trashing CNN and others, which are businesses, is preferential treatment."

Richard Painter, the chief White House ethics lawyer in the George W. Bush administration, said that while some ethics rules can be ambiguous, a Trump staffer's participation would be out of bounds.

"The endorsement of some news outlets and the condemnation of others crosses the line under the OGE regulations," he said. "It’s hard to show where that line precisely is, but what I can tell you is it has been crossed in this instance."

Painter said Trump’s tweets, as well as other administration actions affecting the media industry, raise First Amendment concerns. This makes it more likely an ethics official would find a staffer broke the rules by participating in Trump's fake news awards, he said.

During his time in office, scores of Trump’s tweets have followed a familiar pattern: praise for Fox News and scorn for its competitors.

On Twitter, Trump mentioned Fox News, its programs or its hosts in more than 70 tweets that describe the right-wing media outlet in positive, if not glowing, terms. Trump uses Twitter to promote Fox News reporting, highlight favorable coverage of him and his administration and lavish praise on the network while condemning their competitors.

The fake news media is going crazy with their conspiracy theories and blind hatred. @MSNBC & @CNN are unwatchable. @foxandfriends is great!

Over the same period, Trump has mentioned Fox News' rivals more than 50 times. Aside from two tweets promoting his own interview on ABC News, these tweets have ranged from negative to scathing.

In addition to Trump's tweets, Painter said there’s other evidence the administration has used its power to play favorites in the media industry, raising First Amendment concerns that bolster the case that the fake news awards are out of bounds.

He pointed to the Justice Department's antitrust suit against Time Warner, which has raised questions about whether this was done as retribution against CNN; Trump’s threat against NBC's license over reporting he disputed; and Trump’s repeated — and false — attacks on Amazon and its chairman Jeff Bezos, who owns the Washington Post.

"There's some concrete evidence that they're playing favorites with the media organizations in official action, and penalizing those who do not give them the news coverage they like," Painter said. "Couple that with the president's tweets, including several that suggest he wishes he were in a country without the First Amendment, and this is viewed as a part of a pattern of conduct."

Both Painter and Shaub noted the ethics rules also require loyalty to the rule of law and the constitution.

"In effect the president is trying to establish official news media, establish that Fox is good and CNN is bad," Painter said. "That does loop back into what's a reasonable application of the OGE rule if what you're doing is treading really close to a First Amendment problem."

Eisen and Painter are chair and vice chair, respectively, of the Citizens for Responsibility and Ethics in Washington, which unsuccessfully sued Trump for violating a constitutional bar on presidents and federal officials accepting gifts and payments from foreign governments.

Two experts, who practiced government ethics at the highest levels, said participation by White House staffers would violate federal ethics rules. Trump, for the record, is exempt. They added that the president and his administration’s pattern of playing favorites among media outlets raises First Amendment issues that would subject this event to heightened scrutiny by ethics officials.

We rate this statement True. 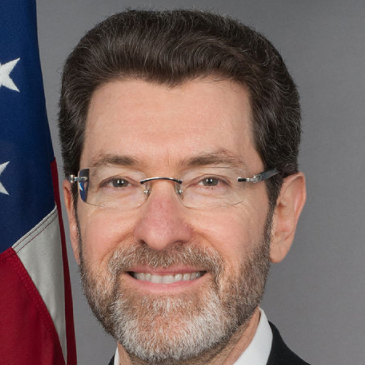 Donald Trump
stated on July 25, 2019 a phone call:
"A lot of people are talking about" the removal of a "very fair prosecutor" in Ukraine.

Bloggers
stated on September 6, 2019 a Facebook post:
Says several well-known charities such as Goodwill and American Red Cross overpay their CEOs and spend a small percentage on helping people.

Sheldon Whitehouse
stated on September 6, 2019 an op-ed:
"One unnamed donor gave $17 million to the Leo-affiliated Judicial Crisis Network to block the nomination of Judge Merrick Garland and to support Gorsuch; then a donor — perhaps the same one — gave another $17 million to prop up Kavanaugh."

Andrew Yang
stated on September 4, 2019 a town hall:
The Green New Deal "would do away with commercial air travel."

John Delaney
stated on August 27, 2019 an interview:
The Amazon rainforest fires are "directly related to trade" tensions between the United States and China.

Ken Cuccinelli
stated on August 22, 2019 a panel discussion:
A federal pilot program to DNA test illegal immigrants showed "something like 30% (of test subjects) are fake families."

Donald Trump
stated on August 19, 2019 a tweet:
"Wow, Report Just Out! Google manipulated from 2.6 million to 16 million votes for Hillary Clinton in 2016 Election!"

Donald Trump
stated on August 1, 2019 a rally:
"The homicide rate in Baltimore is significantly higher than El Salvador, Honduras, Guatemala. ...  I believe it’s higher than Afghanistan."

Ben Carson
stated on July 31, 2019 a press conference:
"You look at the homelessness situation. Take a city like Tokyo, which has more people than New York City. There's no homelessness there."

Anthony Scaramucci
stated on May 11, 2019 an interview:
China’s developing country status in the World Trade Organization "means they can tariff and embargo."

Joe Biden
stated on May 1, 2019 an interview:
"I was always labeled as one of the most liberal members of the United States Congress."