Donald Trump
stated on August 5, 2018 in a tweet:
"California wildfires are being magnified & made so much worse by the bad environmental laws which aren’t allowing massive amount of readily available water to be properly utilized. It is being diverted into the Pacific Ocean."

In his first tweet about this summer’s California wildfires, President Trump blamed environmental laws for making the blazes worse by preventing firefighters from using a "massive amount of readily available water."

He said it’s "being diverted into the Pacific Ocean."

The problem with that claim? The state’s firefighting agency said it’s had no complications accessing water, while fire experts said the state’s hot, dry and windy conditions are to blame for the infernos, not any water policy. 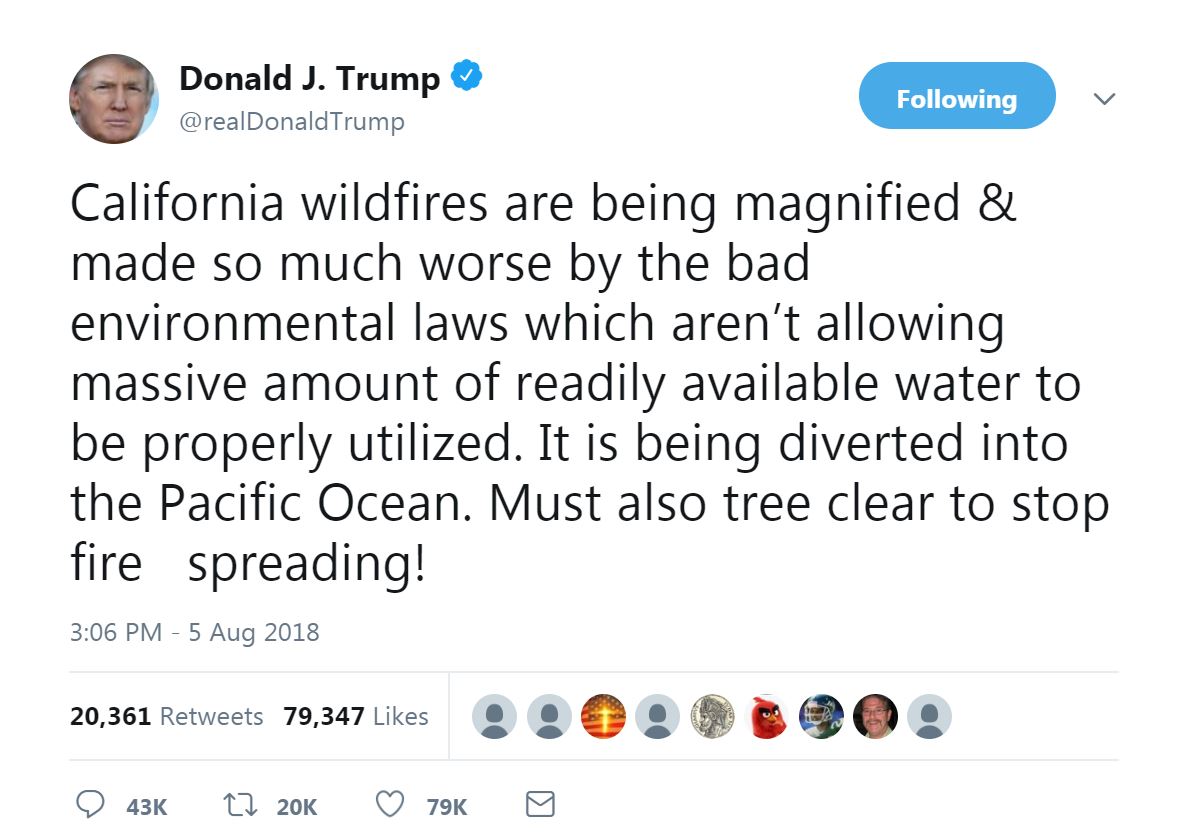 With blazes continuing to ravage the state, we set out on a fact check. We focused on the first portion of the tweet about water policy.

Scott McLean, a spokesman for the California Department of Forestry and Fire Protection told us, it’s the hot and dry conditions taking place earlier in the year that are leading to the extreme fires.

"We have had no issues accessing water to fight the fires," McLean wrote in an email. "This year’s changing weather pattern is leading to more severe and destructive wildfires."

Keith Gilless is a UC Berkeley professor of forest economics and chairman of the California Board of Forestry and Fire Protection.

He said he believes Trump is conflating two very different issues. There’s long been a conflict between farmers and environmental groups over how much water should go to crops versus rivers and lakes. But that fight hasn’t had any effect on firefighting.

"I think there’s some real confusion in the tweet," Gilless said. "The issues over the allocation of water between environmental and agricultural interests have nothing to do with firefighting. And I’m not aware of any situation in which those conflicts have restricted the availability of water for firefighting purposes."

"California is going through a really heartbreaking fire season right now," he added. "Environmental laws about water have nothing to do with it from my perspective."

Gilless said Trump’s language about water "being diverted into the Pacific Ocean," doesn’t make sense, as water naturally flows to the ocean. The argument about how much water should be captured before it gets to the ocean, again, is part of a different, unrelated debate.

The second portion of Trump’s tweet, that California "Must also tree clear to stop fire  spreading!", is also confusing. Forestry experts say thinning trees is a well-established practice that can reduce the severity of fires. But clearing trees is more commonly associated with commercial logging practices, not fire management.

Leroy Westerling, a UC Merced professor and wildfire specialist, told the San Francisco Chronicle that Trump’s tweet, "On the water side, it boggles the mind."

The White House did not immediately respond to a request for evidence to support Trump’s tweet.

A day before the tweet, the Trump administration approved California's request to declare a "major disaster" as the state continues to fight wildfires that have claimed at least nine lives. The declaration makes federal funds available to residents of Shasta County, where the Carr Fire outside Redding, California, has destroyed more than 1,000 homes.

President Trump claimed in a tweet that California’s wildfires are "made so much worse by the bad environmental laws" which prevent firefighters from accessing water. He added in the tweet that water "is being diverted into the Pacific Ocean."

Trump appears to have conflated the state’s real water controversy between farmers and environmentalists with the unrelated issue of firefighting. The state’s fire agency, CalFire, said it has not had problems accessing water. And fire experts said it’s the state’s hot and bone-dry conditions, not environmental laws, that are making blazes more extreme.

PolitiFact Rating:
False
"California wildfires are being magnified & made so much worse by the bad environmental laws which aren’t allowing massive amount of readily available water to be properly utilized. It is being diverted into the Pacific Ocean."
Donald Trump
President