Unless President Donald Trump pre-schedules his tweets, we know what he was doing as the sun rose in Washington -- tweeting a warning to voters in Georgia’s 6th Congressional District on the day of the most expensive House election ever.

"Democrat Jon Ossoff, who wants to raise your taxes to the highest level and is weak on crime and security, doesn't even live in district," Trump tweeted on June 20.

Democrat Jon Ossoff, who wants to raise your taxes to the highest level and is weak on crime and security, doesn't even live in district.

For the record, Ossoff has said he would oppose any increase in income taxes.

Since this is the second time in less than 24 hours that Trump has brought up Ossoff’s residency, we thought we’d clear that up.

He tweeted on Monday, June 19, "Karen Handel's opponent in #GA06 can't even vote in the district he wants to represent because he doesn't even live there!"

This is not news in Georgia. By February, Ossoff was fielding questions on where he lives. He acknowledged that he and his girlfriend (now fiancee) live near Emory University where she’s in medical school. That’s next door to the 6th District, but not in it.

When CNN brought it up, Ossoff said he plans to move back to the district.

"As soon as she concludes her medical training, I will be back into the district where I grew up, but I want to support her and her career and do right by her," he said. "I will be 10 minutes back up the road where I grew up."

How far away is he from the district’s boundaries?

According to Ossoff’s biography on his website, he was raised in Northlake, an unincorporated community in the 6th District. Taking nothing for granted, we mapped the distance from the Emory University campus to his old stomping grounds. According to Google, it’s about 6 miles and takes about 17 minutes to drive, non-rush hour. 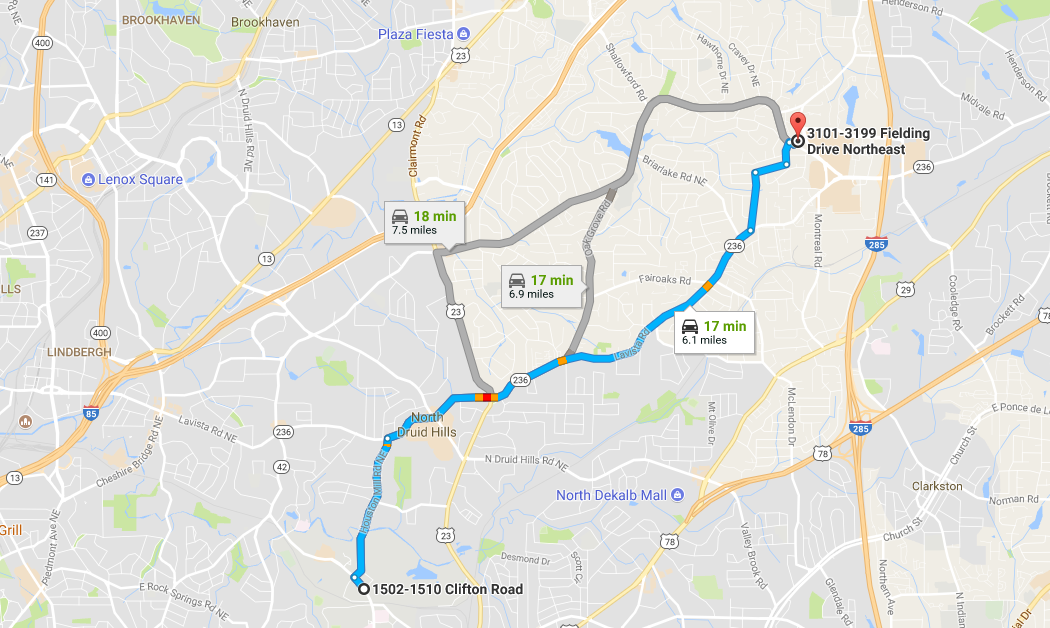 Ossoff told MSNBC he lives about two miles from the district line. The medical school itself is about four miles away, and according to Google, about a 12-minute drive.

To round out the picture, Ossoff’s opponent, Republican Karen Handel, grew up in the Maryland suburbs of Washington and has lived in the 6th District for 25 years.

Trump said Ossoff doesn’t live in the 6th District. That is correct. Depending on how you map it, he lives about 2 to 6 miles either from the district or the neighborhood where he was raised.