Travis Allen
stated on June 22, 2017 in a campaign video:
California taxes are "among the highest in the nation."

In the video announcing his run for California governor, Republican Travis Allen said he wants to reduce the state’s crime rate and its high taxes.

We recently fact-checked Allen’s claims on crime in the video. The Orange County state assemblyman earned a Mostly False for his statement that "crime is on the rise" in all the state’s major metros. We found he cherry-picked data from an uptick in crime in 2015 and ignored the state’s decades-long decline in crime which continued in early 2016.

Given the importance of taxes in California, we also decided to examine Allen's claims on this topic.

Allen makes his claim at about the 0:15 minute mark of the video above.

Was Allen right? Are California’s taxes really "among the highest in the nation"?

We set out on a fact check.

We decided to examine where California ranks in key tax categories, including income, sales and property taxes. Additionally, we looked at how California measures up in a more comprehensive category: Its overall state-local tax burden.

We also spoke with several tax experts for some context on these rankings. They all said comparing tax rates is doable but messy, noting that states assess taxes in different ways.

Allen’s campaign did not respond to our request for evidence to support his claim.

Here’s what we found in each key tax category:

California’s top tier income tax rate is the highest in the nation at 13.3 percent, according to the Tax Foundation and California Taxpayers Association.

It’s the rate paid by Californians who earn more than $1 million annually. Maine had the second highest top rate at 10.15 percent, followed by Oregon’s 9.9 percent, as of Jan. 1, 2017. Several states have no income tax, including Nevada, Washington, Texas and Florida.

Of course, only a fraction of Californians pay the top income tax rate, noted Annette Nellen, professor and director of the graduate tax program at San Jose State University.

A recent Sacramento Bee analysis of state tax data found 61,000 households, or 0.4 percent of the state’s 16 million total, reported income of more than $1 million in 2014.

"This is a very small percentage of the population," Nellen said. "Not everybody is paying that. So, if someone was to say we have really high taxes in California, sometimes that’s interpreted as everybody’s paying a really high tax when in California we also have a fairly high exemption for individuals and children which might cause some lower-income folks to not pay any California income tax at all, at least not directly."

Per capita, Californians pay $1,991 annually in state income taxes, which ranks fourth highest in the country, according to the Tax Foundation.

While only a fraction pay the state’s top income tax rate, everyone who lives here or visits pays California’s highest-in-the-nation sales tax rate of 7.25 percent.

Four states tie for the second-highest statewide sales tax rate, at 7 percent: Indiana, Mississippi, Rhode Island, and Tennessee, according to the Tax Foundation. States with no sales tax include Oregon, Montana, New Hampshire and Delaware.

When adding state and local sales taxes, California rank drops to 10th highest. This combined tax rate varies across the state. In some parts of Los Angeles County, for example, it tops 10 percent, said David Kline, a spokesman for the California Taxpayers Association. The association researches tax data and opposes what it calls unnecessary taxes.

Unlike California’s income and sales tax rates, the state's average effective property tax rate is among the lowest in the nation, at 0.72 percent, or 36th among states, according to the Tax Foundation. That’s due to voter approved Proposition 13, which limited property tax increases to no more than 2 percent per year.

New Jersey had the highest property tax rate at more than 2.1 percent, according to a 2016 report by the Tax Foundation.

Still, Kline said, property tax in California is compounded by additional taxes, such as parcel taxes and Mello-Roos assessments, or fees charged to property owners in a specific area to pay for public improvements such as streets and parks.

"Those can add hundreds or thousands of dollars every year," he added. 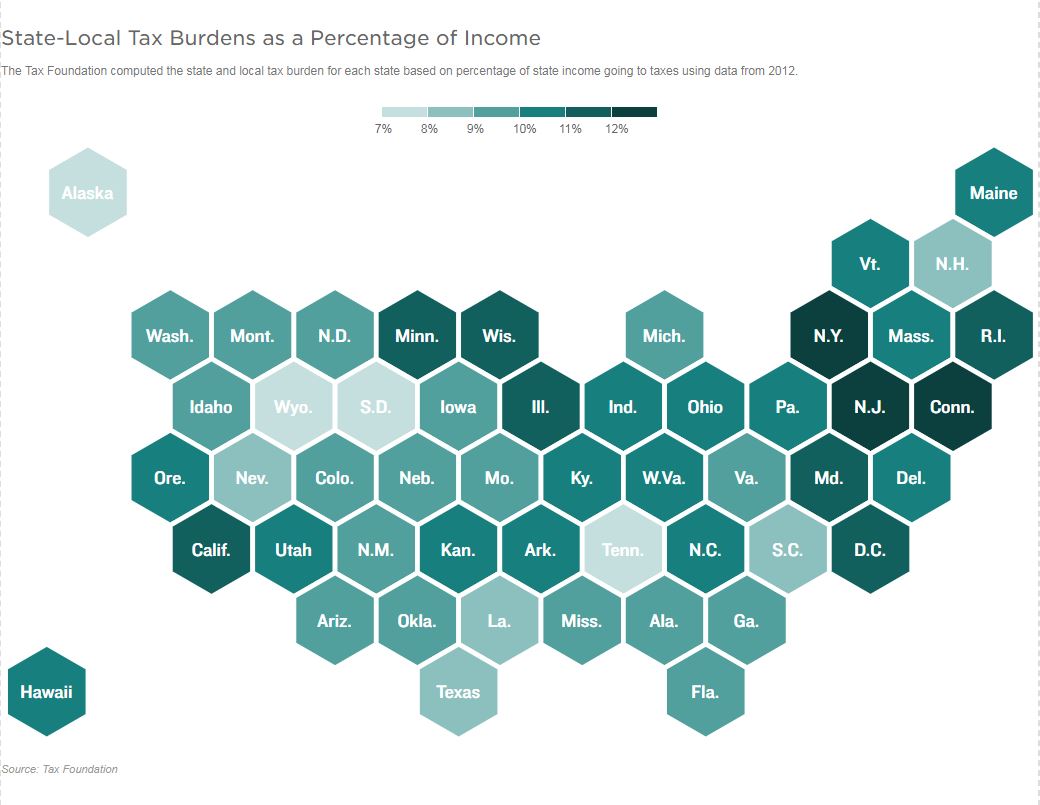 In addition to ranking individual tax categories, the Tax Foundation produces a more comprehensive category it calls the State-Local Tax Burden. It measures the share of income in the state that goes to state and local taxes.

California ranked sixth highest on this list at 11 percent. New Yorkers faced the highest burden at 12.7 percent, followed by Connecticut at 12.6 percent. Alaskans paid the smallest share of their income, 6.5 percent, in state and local taxes.

We asked Joe Henchman, vice president of the Tax Foundation, about the accuracy of Allen’s claim that California’s taxes "are among the highest in the nation."

"I think it’s a fair comment to make," Henchman said. "Unless you’re being really specific about a particular type of tax, California is usually at the high end of the states. It’s almost always in the top half of the states in terms of a tax or its burden or how much people pay. And it’s often in the Top 10."

Exceptions do exist, he said, such as California’s low taxes on wine (44th highest), spirits (40th) and beer (28th), compared with other states.

In recent years, top Democrats in California have deflected criticism about the state’s high taxes by pointing to strong employment and GDP growth. Gov. Jerry Brown, for example, has repeatedly pointed to the more than 2 million jobs California has created since he returned to office in 2011.

Allen has criticized Brown’s recent signing of a 12 cent per gallon increase in the state’s gas tax. That move is expected to make California’s gas tax second highest in the nation, behind Pennsylvania’s, once it goes into effect in Nov. 1, 2017.

"Nobody moves to California because of taxes," he said. "They move in spite of the taxes, because of other positive benefits. … There’s good weather, there’s Silicon Valley, there’s great universities, there’s Hollywood, etc., etc.

"Those, for a lot of people, make it worth paying the taxes, to a point," Henchman added.

Republican candidate for governor Travis Allen recently claimed California’s taxes are "among the highest in the nation."

But when looking at some of the most important tax categories, including income, sales and gasoline taxes, there’s a lot of truth to his claim.

Notably, it does not have one of the nation’s highest property tax rates, at 36th highest.

Allen’s claim is accurate but needs this additional information.

We rate it Mostly True.

Visit our Tracking the Truth series here to see all of our 2018 governor's race fact-checks.

Allen is one of several Republican candidates to announce a run for California governor. The others include John Cox, a venture capitalist from San Diego County and former state Assemblyman David Hadley of Manhattan Beach.

A poll released in June 2017 showed a tightening race. Newsom was in the lead among all candidates, with 22 percent support from likely voters. Villaraigosa had 17 percent support, up from his 11 percent three months earlier.

PolitiFact Rating:
Mostly True
California taxes are "among the highest in the nation."
Travis Allen
Candidate for California governor

PolitiFact California, Will California soon have the highest gas tax in the nation? April 11, 2017

Sacramento Bee, See where wealth is concentrated in California, Dec. 14, 2016