Travis Allen
stated on December 29, 2016 in in an op-ed:
"Beginning on Jan. 1, prostitution by minors will be legal in California."

Pants on Fire: The statement is not accurate and makes a ridiculous claim.

That’s the startling question our audience asked after reading a misleading op-ed by Republican state Assemblyman Travis Allen in the Washington Examiner.

Allen’s opinion piece has been shared widely on social media and led several readers to ask PolitiFact California to check it out.

We decided to fact-check the first line of Allen’s column, which largely reflects the rest of the piece:

"Beginning on Jan. 1, prostitution by minors will be legal in California. Yes, you read that right."

UPDATE: Allen repeated his claim on The O'Reilly Factor on Fox News on Jan. 4, 2017, saying at the end of his interview that "The California Democrats did just legalize child prostitution in California."

Last year, Gov. Jerry Brown signed into law Senate Bill 1322. It decriminalizes prostitution for minors by preventing law enforcement from arresting people under 18 for soliciting sex or loitering with intent to commit prostitution. Supporters of the law said it’s designed to treat children involved in prostitution as victims rather than as criminals.

It does nothing, however, to legalize commercial sex acts.

"The key is that the children involved are not liable, not that the conduct has been legalized," said Gabriel Chin, a criminal law professor at UC Davis School of Law, who analyzed the law upon our request.

Chin added that under the new law "child prostitution is treated just as, say, the production of child pornography is." Adults involved are subject to criminal prosecution, while the children, who are seen as victims, are not, he said.

Representatives for Allen did not respond to our questions.

"I don't care about any amount of legalistic spin that someone wants to put on it. When you decriminalize something, you legalize it," Allen said in the radio interview.

After his initial claim in the op-ed that "prostitution by minors will be legal," Allen adds some factual context in his second line by noting law enforcement can’t "arrest" underage workers for soliciting sex.

Zach Nunn
stated on July 10, 2022 in an interview with Breitbart
“My opponent, Cindy Axne, has actively sought to defund the police.”

A few paragraphs later, however, he wrongly asserts that the new law means law enforcement can’t "interfere" with minors engaging in prostitution.

The law, in fact, includes provisions that officers who encounter these minors shall report the circumstances to the county child welfare agency as abuse or neglect. It also authorizes officers to take a minor engaged in a commercial sex act into temporary custody under some circumstances, including in the event of immediate physical danger or when medical care is needed.

Democratic state Sen. Holly Mitchell of Los Angeles, who authored Senate Bill 1322, responded on Twitter to the mischaracterizations of the law.

"I denounce false claims made by Republicans on my bill #SB1322 that decriminalizes sexually exploited minors," she wrote. "I proudly authored SB 1322 to protect minor victims of human sex trafficking from being further charged as criminals for commercial sexual exploitation."

"This notion, perpetuated by Assemblymember Travis Allen (R-Huntington Beach), that my bill legalizes prostitution and commercial sex for minors is categorically untrue," she added. "It remains unlawful for a person under the age of 18 to consent to sexual intercourse in the State of California and the law remains in effect and is not changed with the implementation of my bill." 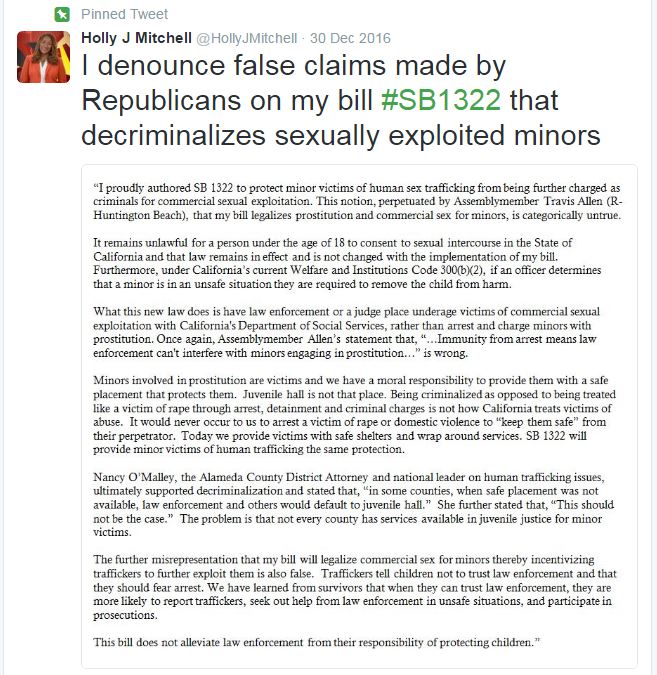 The Sacramento Bee’s fact-checking team PoliGRAPH also examined Allen’s op-ed. It described it as a "misleading column" and rated its assertions "False."

California state Assemblyman Travis Allen claimed in a recent column that "Beginning on Jan. 1, prostitution by minors will be legal in California."

His claim profoundly distorts a new state law that treats minors engaged in commercial sex acts as victims, but does nothing to legalize prostitution.

Young people under age 18 who solicit sex won’t be arrested and sent to juvenile hall. Instead, officers will have the option of taking them into temporary custody if they are in immediate danger or need medical attention. It also says officers shall report the circumstances of minors engaged in prostitution to the county child welfare agency as abuse or neglect.

The law does nothing to change the fact that it is illegal to have sex with minors, solicit prostitutes or arrange clients.

Allen’s specific claim, and the column in general, is grossly misleading.