Travis Allen
stated on June 15, 2017 in a Repeal the Gas Tax campaign article:
"This new gas tax does not increase (road) capacity anywhere in the state. It will build no new lanes of freeways. If Californians didn’t like their traffic before, they’re going to like it even less when they’re stuck in the exact same traffic and paying more for their gas."

Republican Assemblyman Travis Allen is a candidate for California governor.

Orange County Assemblyman Travis Allen is a GOP candidate for governor and a leading critic of the 12 cent per gallon tax hike.

He claimed in a June 15, 2017 article on the Repeal the Gas Tax campaign website that the increase does nothing to solve California’s notorious traffic woes:

"This new gas tax does not increase (road) capacity anywhere in the state. It will build no new lanes of freeways. If Californians didn’t like their traffic before, they’re going to like it even less when they’re stuck in the exact same traffic and paying more for their gas."

The repeal campaign, led by Allen, is one of two efforts to eliminate the tax increase.

Other Republicans have made similar claims.

"Practically none of the new money raised by the gas tax will build new lanes," Assemblyman Chad Mayes said in November 2017.

"There was no clear creation of more capacity," said John Cox, a San Diego businessman who is also running for governor and leads the other repeal effort, speaking at a forum in December.  Both repeal campaigns are working to qualify their initiatives for the November 2018 ballot.

Since Allen’s statement goes the furthest in claiming the tax increase builds no new lanes and won’t ease traffic, we decided to hit the gas on a fact check.

Did he get his facts right? And did he accurately frame the goals of the tax increase? 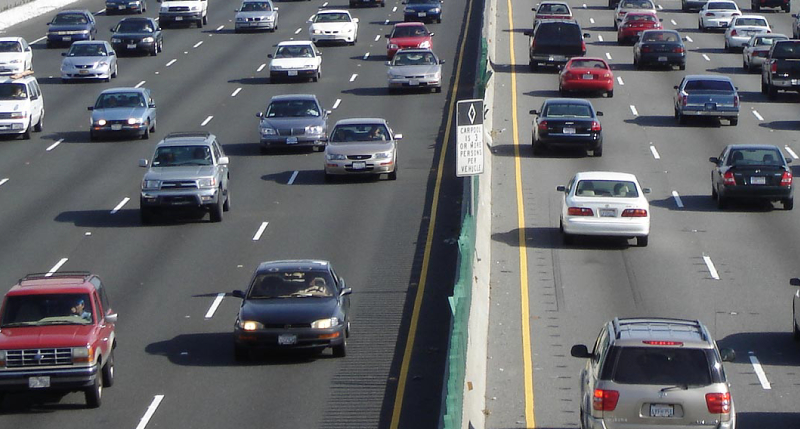 A tax to build new roads or repair them?

The gas tax increase is a key part of The Road Repair and Accountability Act of 2017. It was signed by Democratic Gov. Jerry Brown in April, with the goal of raising $52 billion over the next decade largely for road repairs.

It passed the Legislature and with a Democratic majority and the help of one Republican state senator. From the start, supporters pitched the measure as way to address California’s massive road repair and maintenance backlog -- not to necessarily build bigger freeways as Allen and other Republicans have implied.

The package includes an initial 12 cent per gallon gasoline tax increase and a 20 cent per gallon diesel tax hike, both of which started on Nov. 1, 2017. It also includes a new "transportation improvement fee" ranging from $25 to $175 per year, depending on the value of one’s vehicle. We wrote this summer about how the law will affect the state's already high gas tax rate and gas prices.

In common speech, some politicians simply call this whole package "the gas tax."

Given the repair goals of the legislation, Allen’s framing of the measure is misleading. But we also examined his specific assertions that it won’t build new road lanes or ease traffic gridlock.

We found these are also problematic.

The bulk of the new tax money, 65 percent, goes to repair projects. But 35 percent can be spent on "expanded capacity," including highway and transit improvements, according to Mark Dinger, a spokesman for the California Department of Transportation.

The biggest pot of money for those projects is the $250 million that will be available each year to improve congested corridors across the state. Dinger said that money can be used to make freeways more efficient by improving ramp meters and adding real-time electronic message boards showing precise travel times. Efficiency measures alone, he said, can improve traffic flow by 25 percent.

Dinger said the money can also pay for new freeway lanes, though he estimated those projects would not start until 2019 or 2020. State and regional agencies would need to submit applications for the money.

Here’s where Allen has a point: His spokeswoman pointed out that the congested corridor program can not fund general purpose freeway lanes, which are the main lanes used by most drivers. The legislation does, in fact, prohibit spending this money on those "to mitigate increases in vehicle miles traveled, greenhouse gases, and air pollution," the text of the law reads.

Still, the measure does allow for spending on new carpool and toll lanes, plus auxiliary lanes which can ease the flow of traffic at backed up freeway interchanges.

"The funding package includes about $1.8 billion annually specifically for local streets and roads," the LAO reported in June 2017. It specified that about $100 million annually would be set aside for "capacity expansion," primarily on local roads and streets, though some could be used for transit projects.

"Just adding lanes is simply not the way out of traffic congestion. That’s the old way of thinking in terms of transportation planning. You have to offer multi-modal choices and reduce people’s dependency on their cars," the Caltrans spokesman said.

His statement distorts the goal of the gas tax increase. Its purpose was to tackle the state’s backlog of transportation repairs -- not to build bigger roads and highways.

Allen also misses the mark on the details. It’s correct to say one of the measure’s big pots of money prohibits spending on general purpose freeway lanes.

But it allows funding for freeway carpool and toll lanes along with efficiency projects that can ease up bottlenecks. Additionally, the measure sets aside $100 million annually for the expansion of local roads.

Allen’s claim balances on a sliver of truth, but has a freeway full of problems.

We rate it Mostly False.

PolitiFact Rating:
Mostly False
"This new gas tax does not increase (road) capacity anywhere in the state. It will build no new lanes of freeways. If Californians didn’t like their traffic before, they’re going to like it even less when they’re stuck in the exact same traffic and paying more for their gas."
Travis Allen
California State Assemblyman
https://nocagastax.com/california-gas-tax-hike-repeal-campaign-heats/

Allen is one of two top Republican candidates to announce a run for California governor. The other is John Cox, a businessman from San Diego County.

Visit our Tracking the Truth series here to see all of our 2018 governor's race fact-checks.

The Sacramento Bee, California gas tax increase is now law. What it costs you and what it fixes, April 28, 2017