Bernie Sanders
stated on April 17, 2016 in an interview on ABC's 'This Week':
Says that in her speech to the pro-Israel group AIPAC, Hillary Clinton "had one line on the Palestinian people."

On ABC’s This Week, host George Stephanopoulos asked Bernie Sanders about his remark during the New York Democratic debate that the United States should play "an evenhanded role" with regard to Israel and its neighbors.

Sanders told Stephanopoulos that he thinks President Barack Obama has "done much better than his predecessors" in taking the kind of approach he prefers, but added that "I think we still have a way to go. And I was not criticizing President Obama. I was criticizing (former Secretary of State Hillary) Clinton. She gave a speech to AIPAC" -- referring to the most prominent pro-Israel group in the United States. "It's a long speech. It was one sentence, I believe, that even mentioned the Palestinians."

We wondered whether Sanders’ was right that Clinton "had one line on the Palestinian people" in her AIPAC speech. So we looked closely at her address.

The most obvious way to look at this is to count the number of references to the Palestinians in Clinton’s speech and see if they amount to more than one line. Sanders is wrong by that simple metric, as we’ll show.

But to broaden our look somewhat, we also analyzed more generally how much of Clinton’s speech addressed the Israeli-Palestinian peace process as opposed to how much it addressed Israel’s security needs.

What Clinton said about the Palestinians

Here is the main section of her AIPAC speech -- which she gave on March 21 --  that addressed Palestinians. The sentences that mentioned the Palestinians by name are in bold.

And here is a third choice. Will we keep working toward a negotiated peace or lose forever the goal of two states for two peoples? Despite many setbacks, I remain convinced that peace with security is possible and that it is the only way to guarantee Israel’s long-term survival as a strong Jewish and democratic state.

It may be difficult to imagine progress in this current climate when many Israelis doubt that a willing and capable partner for peace even exists. But inaction cannot be an option. Israelis deserve a secure homeland for the Jewish people. Palestinians should be able to govern themselves in their own state, in peace and dignity. And only a negotiated two-state agreement can survive those outcomes.

If we look at the broader regional context, converging interests between Israel and key Arab states could make it possible to promote progress on the Israeli-Palestinian issue. Israelis and Palestinians could contribute toward greater cooperation between Israel and Arabs.

I know how hard all of this is. I remember what it took just to convene Prime Minister Netanyahu and President Abbas for the three sessions of direct face-to-face talks in 2010 that I presided over. But Israelis and Palestinians cannot give up on the hope of peace. That will only make it harder later.

All of us need to look for opportunities to create the conditions for progress, including by taking positive actions that can rebuild trust — like the recent constructive meetings between the Israeli and Palestinian finance ministers aiming to help bolster the Palestinian economy, or the daily on-the-ground security cooperation between Israel and the Palestinian Authority.

But at the same time, all of us must condemn actions that set back the cause of peace. Terrorism should never be encouraged or celebrated, and children should not be taught to hate in schools. That poisons the future.

Everyone has to do their part by avoiding damaging actions, including with respect to settlements. Now, America has an important role to play in supporting peace efforts. And as president, I would continue the pursuit of direct negotiations. And let me be clear — I would vigorously oppose any attempt by outside parties to impose a solution, including by the U.N. Security Council.

This section includes the word "Palestinian" or a variant seven times, over the course of five sentences. So Sanders is wrong that Clinton "had one line on the Palestinian people." She had -- using the strictest definition possible -- five lines.

Mentions of the peace process vs. mentions of Israeli security

Looking more broadly at the content of Clinton’s speech doesn’t do much to support Sanders’ claim.

Sanders’ point seemed to be that the Palestinians’ interests were being ignored in Clinton’s speech. So we wondered about how much Clinton addressed the peace process between Israelis and Palestinians and how much she talked about the need to preserve Israel’s security. We thought this would be a reasonable proxy for Sanders’ point, since the peace process includes Palestinians as an integral part of the equation, whereas a focus on Israeli security relegates Palestinians’ safety and security to a lower priority.

To look at this question, we made an effort to break down Clinton’s 3,316-word speech by theme. Our choices aren’t unassailable -- some portions of the speech address more than one topic, and different readers may choose to label different sections differently -- but we think it’s pretty good as a rough categorization of what she said.

We settled on five categories. Here they are, along with the number of words we counted for each of those themes:

• Comments about the U.S.-Israel relationship and Clinton’s priorities: 1,148

• Comments urging the peace process forward (the portion excerpted above): 373

To get a better grasp of this breakdown visually, here’s what her speech looks like by theme. The green section indicates preliminary remarks, the purple denotes U.S.-Israel relations, the gray refers to Iran and ISIS, the light blue denotes Israeli security, and the yellow refers to the peace process. 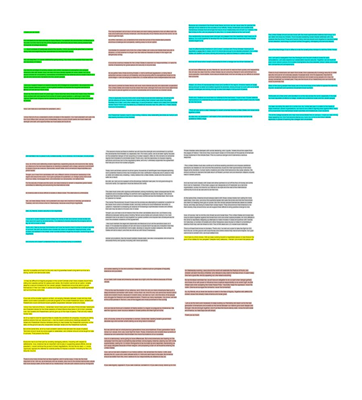 So by our count, more than 10 percent of Clinton’s comments addressed the peace process, which, as we noted, inherently involves the Palestinians.

That’s an imbalance, especially if your goal is "evenhandedness." But the imbalance is much more modest than Sanders’ "one line" comment would indicate.

Sanders said that in her AIPAC speech, Clinton "had one line on the Palestinian people."

She actually had more lines than that -- seven mentions of the word "Palestinian" in five sentences. And overall, she spent about 10 percent of her speech talking about the peace process, of which Palestinians are an integral part.

That’s still an imbalance -- Clinton spent twice as many words discussing Israeli security -- but Sanders’ assertion is still a significant exaggeration. We rate it Mostly False.