John Cornyn
stated on September 7, 2014 in an interview for "Inside Texas Politics" on WFAA-TV, Channel 8, in Dallas:
My office sends federal "money back every year."

On the Sept. 7, 2014, edition of "Inside Texas Politics," a Dallas news program, WFAA-TV reporter Jason Whitely said to Sen. John Cornyn: "A recent survey caught our attention that showed you have one of the most expensive offices in the Senate -- in the top five, behind Feinstein, Boxer, Ted Cruz, I believe, and you’re in there, spending $3.7 million last year; the average is about $2.5 million.

"Why is your office so expensive to run?"

"Texas is a big state," Cornyn replied with a grin. "You’ll notice that... the ones with the largest budgets are the biggest states. And representing 26 million people... it costs money. So we try to conserve the money that we spend -- we send money back every year, try to live within those conservative means -- but the fact of the matter is, I’ve got a job to do and I’m going to do it the best I can and--"

Whitely: "--you send money back every year?"

We were curious about Cornyn’s claim he doesn’t spend all the money budgeted for his office.

To our inquiries, Cornyn spokesman Drew Brandewie provided figures and pointed out a 2014 report by the non-partisan Congressional Research Service noting senators receive funding allowances covering official office expenses including staff, mail, travel to and from their state and Washington, D.C., equipment and other goods and services. And, according to the report, each senator gets some office funding based on their state’s population and distance from the capital.

Each senator’s resulting expenditures are specified in a report issued every six months as well, which initially made us think it would be easy to gauge whether Cornyn has returned office funding every year since he joined the Senate in 2003. 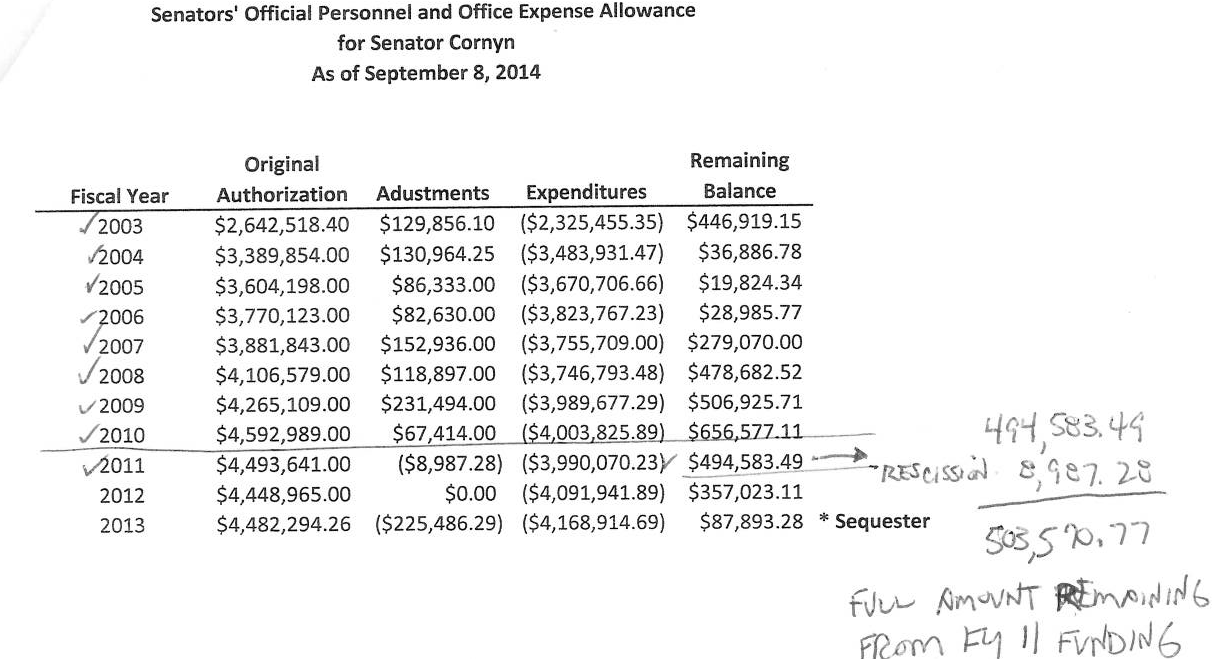 We initially failed to match the provided figures with entries in the six-month reports published by the Government Printing Office (which we paged through at the Texas State Library) partly, it turned out, because the reports list how much money an office didn’t spend in a line-item with a mysterious label. By email, Brandewie counseled that in all but one of the year-ending expense reports, summary line-items titled "Resc/Withdrawals" reflect authorized funds the senator’s office didn’t spend. ("Resc/Withdrawals," we suspect, is short for Rescissions/Withdrawals; a rescission, according to a Senate web page, is the cancellation of a budget authority previously provided by Congress. Got that? It will be on the final.)

The report covering fiscal 2003, folding in about nine months of Cornyn’s first year in the Senate, shows a zero for his office’s entry. But, Brandewie said, that doesn’t mean Cornyn tapped out his office budget. Instead, in that year’s reports, unspent money was entered on a different line, labeled "Transfers," Brandewie said.

Generally, Brandewie said, he based his answers about the expense reports on information provided by Chris Doby, the Senate’s financial clerk, who earlier told us by phone he couldn’t discuss Cornyn’s particular office expenditures. Doby also said it’s not uncommon for a Senate office to end a year with money unspent. Doby also said that if a Senate office doesn't spend all its authorized funds, the leftover money isn't immediately transferred to the U.S. Treasury; it's available for two years longer.

Later, we asked Brandewie if the two-year lag basically enables a senator to both return funds and continue tapping those dollars. Brandewie, citing Doby, said leftover funds may only be spent on expenses from the year they were initially budgeted. So, he said, "a member cannot use funds from one year to pay for expenses from another. The funds are fixed, finite and do not roll over from year to year," the Cornyn aide emailed.

Cornyn said his office sends budgeted money back every year.

We rate this claim True based on figures provided by Cornyn’s office that also appeared in public office expenditure reports, albeit connected to hard-to-decipher labels.

Blog post, "Now it's easier to account for how the Senate spends your money," the Sunlight Foundation, Aug. 5, 2014