Sean Spicer
stated on November 2, 2014 in comments on CNN's "State of the Union":
The last time Republican U.S. Senate candidates "beat more than two (incumbents) was 1980."

For the past couple decades, Republicans have struggled to oust Democratic senators, though that trend is expected to change Tuesday.

Many forecasters have Republicans taking up to eight Democratic Senate seats -- beating incumbents in Arkansas, Louisiana, Alaska and Colorado. If this scenario pans out, Republicans will gain control of the Senate, and they will have overcome a historical challenge.

"The last time we beat more than two (incumbents) was 1980," said Republican National Committee spokesman Sean Spicer on CNN’s State of the Union on Nov. 2.

It’s commonly understood that incumbent candidates have an advantage over their challengers for many reasons including visibility, accomplishments in the position, and being a high-quality candidate (why they were elected in the first place). But have Republican challengers really struggled so much to take Democratic seats?

We looked at past Senate election results and found that Republicans have had some successful gains in the past 35 years, but many of those wins were in races for an open seat when a Democratic senator was retiring.

In 1980, Republicans took 12 Democrat Senate seats (nine incumbents lost in the general election, while three lost in their primaries.). Spicer is correct to say they haven’t beat more than two incumbents since then.

We found a great chart showing Senate seat turnover for the past half-century in the Brookings Institution’s most recent "Vital Statistics on Congress" report. (h/t to Sabato’s Crystal Ball.) The arrows show when a Democratic (D) seat switched to a Republican (R) seat and vice versa. 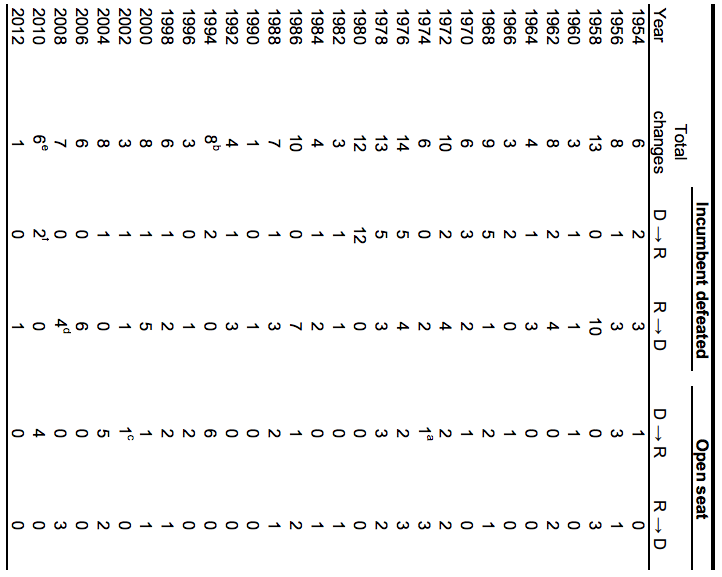 From 1981 on, Republicans have beaten only 12 incumbent Democrats for Senate seats. Republicans’ biggest Senate gains in that time frame all involve taking open seats -- such as 1994, 2004 and 2010, when they gained four, five and six open seats, respectively.

Senate Democrats haven’t had quite the same struggle against Republican incumbents in recent years. Since 1981, they’ve beaten 37 incumbents total, compared to Republicans’ 12.

So if Republicans are able to beat more than two incumbent Democratic senators Tuesday, it would be a clear break with the recent past.

What made 1980 so special? In the same election, former President Ronald Reagan beat incumbent Democrat President Jimmy Carter. Carter was fast falling out of favor with voters, considering the Iran hostage crisis, a floundering economy and other issues. On top of Carter’s struggles, there was a major rift between Southern and Northern Democrats. It was an extraordinary political environment that allowed Republicans to sweep the congressional elections.

Compare that to this year’s Senate elections where, although there is no presidential election, Republicans are using President Barack Obama’s relatively low popularity to their advantage in races against incumbent Democrats.

Republicans kicked a total of 9 incumbent Democrats out of office in 1980 (another three lost in a primary). Since then, Republicans have turned two or fewer seats each election. Most of their success has been in winning formerly Democratic open seats. We rate Spicer’s claim True.