With Election Day getting closer, President Donald Trump is traveling from one swing state to the other making his last in-person pitch to voters. Trump frames the election through an economic angle, telling supporters that they have a choice between "a Trump super recovery" and "a Biden depression."

"If he gets in, you’re going to have a depression, the likes of which you’ve never seen before with the possible exception of 1929," Trump said in New Hampshire on Oct. 25.

Trump at his rallies mentions the coronavirus pandemic, but it doesn’t come across as the main topic of concern, despite rising cases of COVID-19.

In Ohio, North Carolina, Florida and elsewhere, Trump’s many supporters are packed together, and not all wearing masks, as is recommended by public health experts to reduce the spread of the contagious disease. Trump doesn’t appear bothered by it; he’s said people are tired of COVID-19.

So as he campaigns, Trump largely touts achievements, brings attention to the economy, the 2016 campaign and his grievances with Democratic presidential nominee Joe Biden.

We’ve found that Trump’s claims often stray away from the facts, mislead and lack evidence. Here’s a recap of Trump’s closing arguments on the topics of his achievements, the coronavirus, and Biden, fact-checked. The claims come from speeches in Pennsylvania, New Hampshire, Ohio, and North Carolina, since Oct. 24.

Needs context. Total nonfarm employment grew from 130.3 million in April to 141.7 million in September, so Trump’s numbers check out. However, that job growth followed a drop of more than 20 million jobs in April. The decline in April was so large that a big bounceback is not all that surprising, an economist told us.

"The wall is going to be finished very shortly, over 400 miles."

Wrong. Trump's administration has mainly replaced barriers installed by previous administrations with new ones that are expected to be more effective in stopping illegal immigration and drug smuggling. He has not added hundreds of miles of wall to protect the border for the first time.

"Mexico is paying for the wall."

Wrong. The construction that’s gone up is being financed by American taxpayers. The Trump administration has said that construction costs are covered by the U.S. departments of Homeland Security and Defense, and from the Treasury Forfeiture Fund.

ISIS is much weaker now than when Trump came into office, and Trump deserves some credit for applying more resources to the fight, experts say. But the strategy Trump used was largely inherited from the Obama administration, and the terrorist group is still operating in some areas.

This needs context. The total amount of money earmarked for defense under Trump comes out to nearly $2.7 trillion, based on budgets for fiscal years 2017-2020. Trump has said that the trillions of dollars amount to a rebuild of the military, however, most weapons and infrastructure are the same as they were before he took office. Not all of that money has been spent, and not all of it has gone toward what would be considered a rebuild.

"I reformed the VA, passed VA Choice and VA Accountability."

False. Congress and the Obama administration passed the Veterans Access, Choice and Accountability Act of 2014. Under Trump, Congress passed a new version of a Choice program in June 2018 — but the program itself has been around since 2014. 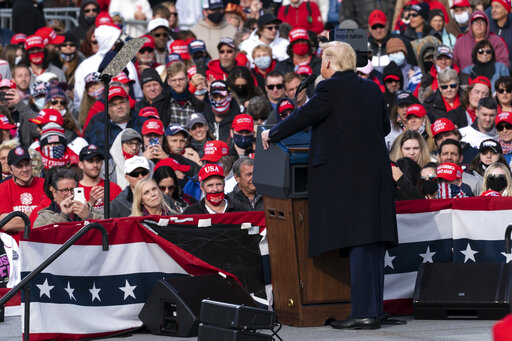 "It is going away. It's rounding the turn."

False. Trump said this Oct. 24. The day before, the United States set a record high number of confirmed daily coronavirus cases: 83,757. "Rounding the turn" suggests that significant and sustained improvements are being made in the fight against the virus. That’s not the case in the United States, according to the data.

Mostly False. Trump’s 2 million estimate appears to be taken from a model that shows what would happen without any mitigation measures — that is, if citizens had continued their daily lives as usual, and governments did nothing. Experts said that wouldn’t have happened in real life.

"You know why we have cases? Because we test so much."

False. Testing doesn’t create instances of the virus. It is a way of showing and tracking cases. Testing has increased nationally, but epidemiologists say that if this were the only reason that new cases were rising, the percentage of positive tests should be dropping or at least remaining about the same. The positivity rate in the United States is rising.

"The mortality rate is down 85% because of the therapeutics and all, they learned."

Trump has been saying this at least since early September, comparing data with April. There has been a major decline in the case-fatality rate — the number of coronavirus deaths divided by known cases — compared with an earlier phase in the epidemic. Therapeutics are part of the reason. One factor in a lower case-fatality rate is a significant increase in coronavirus testing. In the first months of the outbreak, testing focused on those who were more seriously ill and nursing home residents. That kept the case-fatality rate high.

"He wants to raise your taxes."

This isn’t true for most taxpayers. Independent tax analysts say Biden’s plan would not directly raise taxes on any household earning below $400,000 a year.

"Biden has vowed to abolish fracking."

Needs context. Biden has said he would block the federal government from issuing new permits for oil and gas drilling on public lands, but wants to allow existing fracking operations to continue. Fracking, formally known as hydraulic fracturing, is an oil and gas extraction technique. About 10% of all fracking happens on federal lands.

"They want to terminate your religious liberty."

Trump has made similar wrong claims. Biden, a Catholic who routinely invokes his faith, has not proposed to "drive God from the public square" as Trump has said at times. Biden’s campaign website says he would "empower religious organizations to provide safe places of worship and community for their members, while also reaffirming our national commitment to freedom, tolerance, and inclusivity."

"They want to destroy the suburbs."

False. Biden is not seeking to abolish the suburbs, force rezoning or end single-family zoning. Trump’s claim of Biden destroying suburbs is an extreme interpretation of Biden’s proposal to reinstate an Obama administration requirement related to addressing discrimination in housing.

"They’re going to take your guns away. … Your Second Amendment will be either obliterated totally or almost totally."

Biden is not calling for the confiscation of all guns or for a repeal of the Second Amendment. Biden wants to ban the manufacture and sale of assault weapons and high-capacity magazines, and to regulate possession of existing assault weapons. Under a buyback program, Biden says he will give people who now have assault weapons or high-capacity magazines two options: sell the weapons to the government, or register them under the National Firearms Act. "It’s within our grasp to end our gun violence epidemic and respect the Second Amendment, which is limited," Biden’s campaign website says.

"He wants open borders and he wants unlimited illegal aliens coming in."

Biden hasn’t called for unlimited illegal immigration or open borders. His campaign website says he wants to "reassert America’s commitment to asylum-seekers and refugees." The Trump administration has restricted asylum opportunities for immigrants and has lowered the refugee admission ceiling to the lowest levels on record. Biden also says he wouldn’t build more border barriers, and instead would "direct federal resources to smart border enforcement efforts," such as cameras, sensors, large-scale X-ray machines, and fixed towers at and between ports of entry.

2016 campaign and his impeachment

"We caught them spying on my campaign."

False. Multiple independent investigations, including a series of bipartisan Senate reports, found no political influence over the FBI investigation of Russian interference in the 2016 election. The FBI targeted four people with greater or lesser roles in the Trump campaign, but conducted that independently of the White House.

"They even impeached me over a perfect phone call. ‘Hello? How are you doing? Congratulations. Congratulations on your win, Mr. President of Ukraine.’ ‘We’re going to impeach him’."

This isn’t what made Trump’s phone call controversial. The House of Representatives impeached Trump on charges of abuse of power and obstruction of Congress. The House’s articles of impeachment followed months of investigation after a whistleblower’s complaint sounded alarms about Trump’s efforts to get Ukrainian President Volodymyr Zelensky to announce investigations into Biden and a debunked conspiracy related to the 2016 election. The articles charged that Trump held up security assistance and a White House meeting to put pressure on Zelensky, then obstructed Congress to cover up that effort.