Ron DeSantis
stated on August 4, 2021 in a press conference:
Says Joe Biden has driven the current coronavirus surge because he “imported more virus from around the world by having a wide open southern border.”

A migrant carries a child to an intake area after turning themselves in upon crossing the U.S.-Mexico border on March 24, 2021, in Roma, Texas. (AP)

Florida has the second-highest per-capita coronavirus case load of any state as of Aug. 6, exceeding its level at any point during the pandemic. Florida also has the highest coronavirus hospitalization rate of any state, at more than three times the national average.

Biden pointed this out in remarks on Aug. 3. "Make no mistake," he said. "The escalation of cases is particularly concentrated in states with low vaccination rates. Just two states, Florida and Texas, account for one-third of all new COVID-19 cases in the entire country. ... Look, we need leadership from everyone. And if some governors aren’t willing to do the right thing to beat this pandemic, then they should allow businesses and universities who want to do the right thing to be able to do it."

DeSantis unloaded on Biden during an Aug. 4 news conference in Panama City, Fla.

"He’s imported more virus from around the world by having a wide open southern border. You have hundreds of thousands of people pouring across every month," DeSantis said. "You have over 100 different countries where people are pouring through. Not only are they letting them through — they're then farming them out all across our communities across this country. Putting them on planes, putting them on buses."

DeSantis doubled down in a fundraising letter later that day: "Joe Biden has the nerve to tell me to get out of the way on COVID while he lets COVID-infected migrants pour over our southern border by the hundreds of thousands. No elected official is doing more to enable the transmission of COVID in America than Joe Biden with his open borders policies."

Public health experts said it’s reasonable to be concerned about coronavirus spreading among migrants, especially if they’re living in close quarters. "It would be fair to say that detention centers, like prisons, are likely to be 'hotspots' for transmission," said Babak Javid, a professor of medicine at the University of California-San Francisco. "We saw a lot of this last year," earlier in the pandemic.

But they said there is no evidence it’s happening on the scale that DeSantis described.

It may well be that immigrants coming illegally into the country are contributing to COVID-19 caseloads, "but given the extensive transmission already in the U.S., the immigration contribution is akin to pouring a bucket of water into a swimming pool," said William Schaffner, a professor of preventive medicine at Vanderbilt University. "It’s hard to measure and pretty trivial."

In a statement, DeSantis press secretary Christina Pushaw focused on the migrants who make it across the border without detection. She acknowledged that migration is not the only factor in COVID-19 spread.

"We know tens of thousands of migrants cross the border illegally every month," she said. "Officials don’t have a precise number, because the border is porous, and it stands to reason that many people enter undetected. ... Some of those countries where a significant portion of the migrants hail from, such as Haiti, have extremely low rates of COVID vaccination."

Still, it is wrong to say, as DeSantis did, that the southern border is "wide open" for everyone to just come into the country. Most people who are encountered are turned away under a public health law invoked by Trump’s administration and continued by Biden.

Border officials — at and between ports of entries — recorded more than 822,000 encounters with migrants from February to June, and most of those people were expelled under the public health law. These individuals don’t get to stay in the country to request asylum or other immigration protection.

Nicole Hallett, a professor and director of the Immigrants’ Rights Clinic at the University of Chicago Law School, told PolitiFact that the apprehension numbers reflect that people trying and failing to cross multiple times.

"Apprehensions have increased because of the strict COVID restrictions, not because restrictions have eased," Hallett said.

The Biden administration has allowed certain groups of migrants to file for immigration protection, such as children arriving alone at the southern border and some families with young children. The Department of Homeland Security, however, said it had recently resumed expedited removal flights for certain families who recently arrived at the southern border.

Officials in February began to let in asylum seekers who were waiting for a resolution of their U.S. immigration cases in Mexico under the Trump-era Remain in Mexico program. (Biden ended that program in June.)

Customs and Border Protection told PolitiFact in April that personnel do initial inspections for symptoms or risk factors associated with COVID-19 and consult with onsite medical personnel, the U.S. Centers for Disease Control and Prevention, or local health systems as appropriate.

Instagram posts
stated on November 11, 2022 in a post
Increases in respiratory syncytial virus in children are linked to the COVID-19 vaccine.

DHS also said in April that it works with state and local authorities and non-governmental organizations to make sure that all migrants are tested for COVID-19 "at some point during their immigration journey."

This doesn’t mean that the chance of coronavirus spread on the border is zero. For instance, McAllen, Texas, along the border with Mexico, has seen an increasing number of migrants arriving in recent weeks. According to the city, more than 7,000 migrants have tested positive for the coronavirus, out of 87,000 migrants who had passed through the city.

But drawing a clear line between migrants and the spread of the coronavirus throughout the U.S., as DeSantis did, requires a sense of how many migrants are evading detection and how many of them are infected.

"Otherwise, it is a statement without any facts to substantiate it," said Nicole Gatto, an associate professor in Claremont Graduate University’s school of community and global health.

The current surge is driven by community spread

The data for coronavirus cases provides poor support for the notion that the virus is being spread by illegal immigration.

Significant outbreaks are happening well inland from the border, in states like Arkansas, Georgia, Kentucky and Missouri. Public health experts express skepticism that illegal border crossings are to blame for these outbreaks. 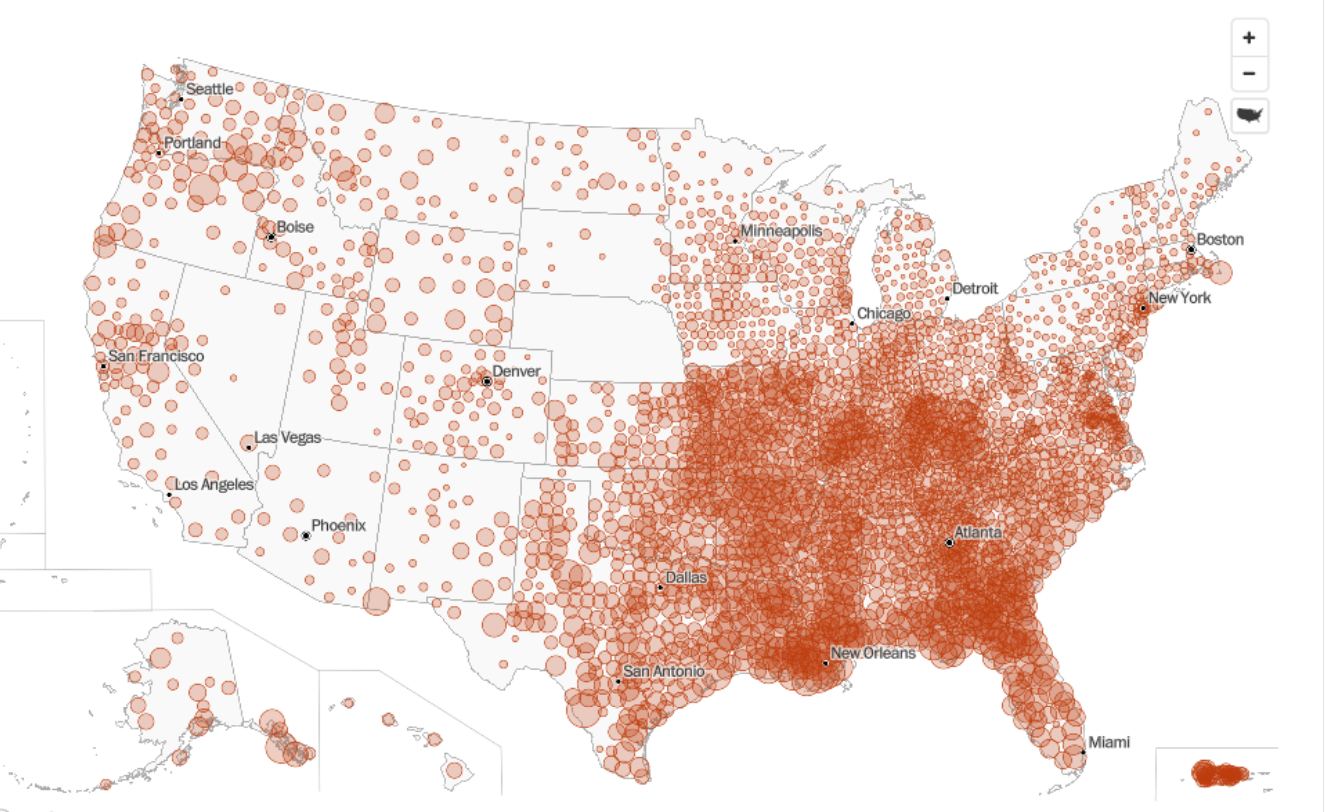 (This map, by the Washington Post, shows the seven-day average of reported cases for each U.S. county, per 100,000 residents. Reprinted with permission; updated versions available here.)

If DeSantis were correct, the land border between the U.S. and Mexico would be among the hardest-hit parts of the country, since even if migrants eventually disperse to other locations, they would have an impact on coronavirus rates locally first.

However, the entire land border between San Diego and the southern tip of Texas shows relatively low case rates compared with the entire southeastern quadrant of the U.S.

Given this data, "it doesn't seem right that illegal immigration is driving the current surge," said Javid, the University of California-San Francisco professor.

There’s also a more plausible explanation for the coronavirus surge’s current pattern: Case rates are higher in places with lower rates of vaccination.

An analysis by the New York Times found that at the end of July, counties with vaccination rates below 30% had coronavirus case rates well over double the case rates in counties with at least 60% vaccination. And five of the six least-vaccinated states — Alabama, Arkansas, Georgia, Louisiana, and Mississippi — are all squarely within the geographical quadrant of the country that has the highest case rates.

"The pattern of distribution of coronavirus cases does not correspond in any way to immigrant movement," said Arthur Caplan, director of the division of medical ethics at the New York University Grossman School of Medicine. "And the paths to ‘bringing’ COVID here are many, including tourists, diplomats, boat workers, student exchange, and cruises."

Caplan said he views DeSantis’ statements as the latest in a long history of efforts to offload blame for infectious diseases on immigrants.

"The notion of immigrants bringing disease has been alleged about Gypsies, Jews, Italians, Irish, and Blacks," he said. "As we know from Ebola, SARS, and influenza, infections get here all the time. The issue is what we do to stop their spread."

DeSantis said Biden has driven the current coronavirus surge because he "imported more virus from around the world by having a wide open southern border."

The available evidence shows that coronavirus hot spots tend to be clustered either far from the border or on the water, whereas the entire land border with Mexico has fairly low rates. The hotspot locations tend to correlate with low rates of vaccination among the public.

In addition, the U.S. does not have a "wide open" border. Most people who are encountered are turned away under a Trump-era policy that Biden continued.

Howard Markel and Alexandra Minna Stern, "The Foreignness of Germs: The Persistent Association of Immigrants and Disease in American Society" (Milbank Quarterly), 2002

PolitiFact, US-Mexico border not ‘wide open,’ most people trying to enter US are turned away, July 28, 2021

PolitiFact, Fox News’ Jeanine Pirro wrongly claims US border is ‘open to anyone from anywhere’, March 23, 2021

Email interview with Babak Javid, professor of medicine at the University of California-San Francisco, Aug. 5, 2021

Email interview with Arthur Caplan, director of the division of medical ethics at the New York University Grossman School of Medicine, Aug. 5, 2021