According to President Donald Trump’s storyline, Joe Biden and his allies want to ban or destroy many things that matter to Americans, like health care protections, the Second Amendment and churches.

"The radical left is hell bent on destroying everything we love and cherish," Trump said at a campaign rally in Sanford, Fla., Oct 12, with no shortage of hyperbole.

As part of our 2020 election coverage, PolitiFact has been monitoring and fact-checking Trump’s claims like these on Twitter, at campaign rallies, at White House events and during media interviews. And we’ve noticed a pattern: His claims about things Biden and Democrats want to eliminate are routinely inaccurate, misleading, oversimplified or exaggerated. (We’ve also been fact-checking Biden.)

Here’s a rundown of more than a dozen things Trump commonly — and falsely — says Biden wants to ban, abolish or destroy, along with the facts.

Biden "will destroy your protections for pre-existing conditions"

Biden does not want to end these protections. Biden says he supports and wants to defend the Affordable Care Act, the health care law signed by President Barack Obama that established strict protections for people with pre-existing conditions. It’s Trump who wants to overturn the law, and while he has issued a largely toothless executive order affirming support for those protections, Trump has not offered a replacement that would keep them intact.

Biden’s plans related to health care and seniors do not call for the elimination of Social Security benefits. Biden says the Social Security program is one of the nation’s "great public policy successes" and says he would try to make the program solvent and prevent cuts in benefits to American retirees.

Biden does not want to cut or eliminate Medicare. Biden wants to allow Americans to buy into a public option for government-backed health insurance, but plans to also keep Medicare. He says he wants to lower the Medicare eligibility age from 65 to 60 and to protect the Medicare trust fund.

"They want to … confiscate your guns"

Biden is not calling for the confiscation of all guns or for a repeal of the Second Amendment. To combat gun violence, Biden wants to ban the manufacture and sale of assault weapons and high-capacity magazines, and to regulate possession of existing assault weapons. Under a buyback program, Biden says he will give people who now have assault weapons or high-capacity magazines two options: sell the weapons to the government, or register them under the National Firearms Act. "It’s within our grasp to end our gun violence epidemic and respect the Second Amendment, which is limited," Biden’s campaign website says.

"They now want to abolish our police departments"

Biden has repeatedly said he does not want to defund the police or abolish police departments. Biden says police departments should be given resources "to implement meaningful reforms" and that federal dollars should be contingent on completion of those reforms. His campaign platform includes hiring more officers, focused on community policing.

"They want to abolish our prisons"

Biden does not want to abolish prisons. A task force made up of representatives from Biden’s team and allies of Sen. Bernie Sanders, I-Vt., met to hammer out Biden’s general-election platform. The resulting document recommended changing some aspects of jails and prisons, saying too many of them subject people to inhumane treatment. Democrats support ending the use of private prisons. But that’s not the same as getting rid of all jails and prisons.

The Biden-Sanders task force recommended ending for-profit detention centers, but not an abolition of all immigration detention centers. The task force said the government should prioritize the use of Department of Homeland Security facilities, and that detention should be "a last resort, not the default." 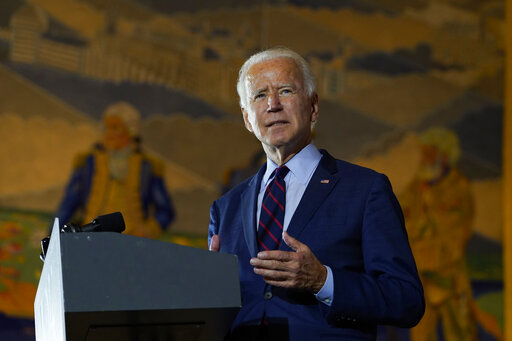 Biden "is even talking about taking the wall down"

Biden has not said he would take down barriers built at the border. What he has said is that he wouldn’t build more of them. Biden says he would "direct federal resources to smart border enforcement efforts," such as cameras, sensors, large-scale X-ray machines, and fixed towers at and between ports of entry.

Biden would block the federal government from issuing new permits for oil and gas drilling on public lands, but wants to allow existing fracking operations to continue. Fracking, formally known as hydraulic fracturing, is an oil and gas extraction technique that has helped boost domestic production over the past decade, but has also raised concerns about environmental and health impacts. About 10% of all fracking happens on federal lands.

Biden will "destroy your suburbs"

Biden is not seeking to abolish the suburbs, force rezoning or end single-family zoning. The Trump claim is an extreme interpretation of Biden’s proposal to reinstate an Obama administration requirement related to addressing discrimination in housing.

Democrats "want to shut your churches down, permanently"

Democrats are not calling for churches to be closed. Many states — including those governed by Republicans — have required people to wear face coverings in public, banned large gatherings and ordered nonessential businesses to close to control the spread of the coronavirus. Some states exempt churches from their restrictions.

Biden and Democrats want to "drive God from the public square"

Biden, a Catholic who routinely invokes his faith, has not proposed this. His campaign website says he would "empower religious organizations to provide safe places of worship and community for their members, while also reaffirming our national commitment to freedom, tolerance, and inclusivity." To address anti-Semitism and violent attacks in places of worship, Biden’s plan includes increasing security grants to religious communities, setting up a faith-based law enforcement program, and strengthening the prosecution of hate crimes.

Trump has falsely claimed that Biden would "mandate" net-zero carbon emissions by 2030 and that such a mandate "basically means no windows, no nothing." The task force recommended setting a goal that all new buildings achieve net-zero greenhouse gas emissions by 2030. But the recommendation said nothing about a mandate — or windows. Also, the presence of windows in a building does not mean it can’t achieve net-zero carbon emissions.

Biden doesn’t want to get rid of cows, whose, ahem, gas emissions contribute to climate change. Trump has said that Biden would try to jam through the Green New Deal and that under the proposal, "cows are out." That's not true. For one thing, Biden has said he does not support the Green New Deal. His climate plan shares some of the broader goals of the Green New Deal, like net-zero carbon emissions by 2050, but leaves out other agenda items. For another thing, there’s no mention of cows in the proposal — only a note in a supporting document that it would be hard to ban "farting cows."

RELATED: Joe Biden on the issues: a PolitiFact guide

RELATED: Donald Trump on the issues: a PolitiFact guide

Listed within the story.