KEENE, N.H. — Entrepreneur Andrew Yang came to the ornate 96-year-old Colonial Theater to make his case for data-driven policies to tackle the problem of jobs in the 21st century. A mixed crowd of young and old heard Yang explain how automation had permanently displaced millions of workers. Yang said this laid the groundwork for Donald Trump’s victory in 2016.

"There's a straight lineup between the adoption of industrial automation in a voting area and the movement to Trump in that area," Yang said Feb. 5.

One of Yang’s key proposals starts with recognizing the value of the personal data held by tech giants such as Amazon, Facebook and Google. And then taxing them in order to share some of that value with all Americans in the form of a universal basic income, a monthly check to every American.

"I like that he said we need to focus on the problems that got Donald Trump elected in the first place, and he said that absolutely nobody else is talking about that, and I agree," King said.

PolitiFact is traveling through New Hampshire this week to fact-check Democratic candidates ahead of the state’s Feb. 11 primary.

We fact-checked several of Yang’s statements in Keene, here’s a recap.

This is no longer quite accurate. Life expectancy did decline between 2014 and 2017. Yang said the last time America saw that kind of drop was during the 1918 Spanish Flu. But just released data from the Centers for Disease Control and Prevention show that life expectancy ticked up by 0.1 year between 2017 and 2018. It is now back where it stood in 2015, 78.7 years.

That is still two tenths of a year less than in 2014, but the decline Yang described has reversed slightly. According to the CDC, the two leading reasons for the change are lower numbers of deaths from cancer and unintentional injuries, a category that includes drug overdoses.

As for corporate profits heading up, that’s broadly accurate. In raw dollars, they are near record highs. And as a percentage of gross domestic income, they have ticked up recently, although they have remained in the 4% to 8% range for decades. 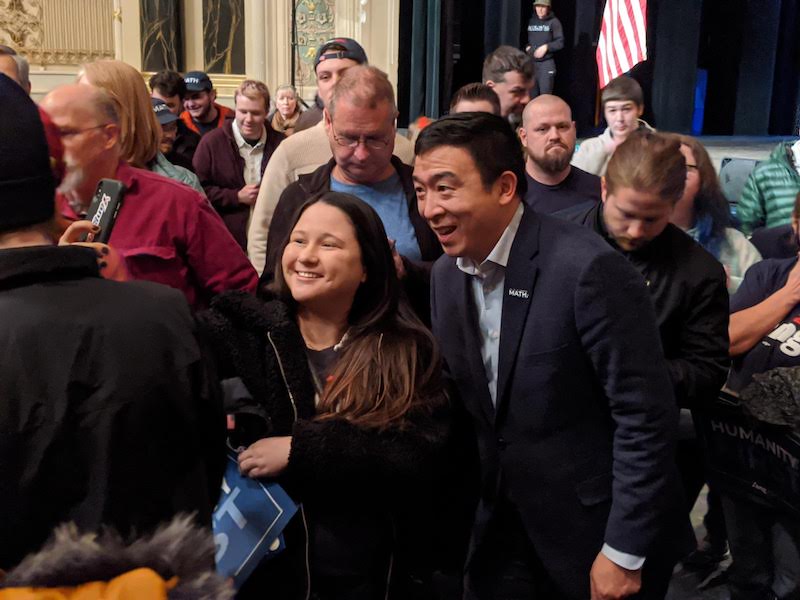 "Only 5% of Americans today donate to political candidates or campaigns."

This is Mostly True. Yang was citing an online poll in June that found 8% of Americans said they had given to a 2020 presidential candidate. Pew Research looked at what people told pollsters after the 2016 election and found that 12% said they donated, but that wasn’t limited to federal candidates.

So Yang is in the ballpark, but his number might be a bit low.

Speaking of universal basic income, "Thomas Paine was for it at the founding of our country, called it the citizens dividend for all Americans. Martin Luther King, whose birthday we just celebrated, was fighting for this in 1968, it was what he was fighting for when he was killed… It was so mainstream it passed the U.S. House of Representatives twice in 1971 under Richard Nixon."

This is Mostly True.

Paine’s proposal in the 1790s pamphlet Agrarian Justice was in some ways an early version of the Social Security program and had an element of universal basic income. Paine proposed a one-time payment of 15 pounds to every person when they turned 21 years old; and favored paying people 10 pounds annually for the rest of their lives starting at age 50. His proposal, inspired by the French Revolution, was published about two decades after the founding of the United States in 1776.

It is true that King supported a guaranteed income in his 1967 book, "Where Do We Go From Here: Chaos or Community?" But he wasn’t explicitly advocating for it on the day he was killed.

The House in 1970 and 1971 (not twice in 1971) passed bills that experts say were as close as the U.S. has come to passing something resembling a universal basic income.

Yang’s Freedom Dividend plan is a form of universal basic income, guaranteeing $1,000 a month to every U.S. citizen over 18 years old, without having to pass a test or meet a work requirement.

Says "30% of our stores and malls" are closing because of Amazon.

Online retailers, including Amazon, certainly have had an impact on sales at brick-and-mortar locations, but Yang’s claim needs context.

E-commerce sales as a percentage of all sales has been growing for years. Meanwhile, consulting firm CoStar in 2018 reported that by August of that year, retail stores had shuttered a record number of square feet, even before the full 12-month period was over. And some analysts have predicted that the number of malls will fall by 25% or 30% within the next few years.

Some sectors (including automotive, appliances and hardware) remain relatively impervious to online sales, even as others (such as toys, entertainment and books) have deteriorated.

"There are 200 counties in the United States that do not have any local news source at all."

This is grounded in data. Research by UNC School of Media and Journalism’s Center for Innovation and Sustainability in Local Media and published in a 2018 report found that there were around 200 counties in the United States without any newspaper, weekly or daily, "creating a news vacuum for about 3.2 million residents and public officials in those counties."

Listed in the story.