J.D. Vance and U.S. Rep. Tim Ryan have accused each other of failing to address Ohio’s opioid crisis throughout their U.S. Senate campaign in that state.

"Ryan wanted to decriminalize fentanyl," Vance tweeted "Now he wants it declared a weapon of mass destruction. The only difference is that three years ago he was trying to scam a different group of voters than he is today."

"No, I do not support the decriminalization at the federal level of all drug possession for personal use," he wrote. He also wrote that he does agree with decriminalizing possession of marijuana.

Ryan’s record in Congress shows he has supported efforts to curb fentanyl.

ACLU asked Democrats to pledge to reduce mass incarceration in 2019

Vance’s tweet is based on information in a Fox News story about a pledge the American Civil Liberties Union sought from presidential candidates in 2019. The story is headlined, "Vance calls Ryan's pledge to decriminalize 'all drug possession' a 'slap in the face' of victims' families."

The ACLU pledge was focused on reducing the prison population. It asked whether candidates would work to reduce mass incarceration by 50%.

Fox News linked to an ACLU article which listed a few strategies to reduce mass incarceration, including "ending the War on Drugs by decriminalizing all drug possession." It singled out higher-profile Democratic presidential candidates as having signed this pledge, but did not mention Ryan.

We asked the ACLU to send us Ryan’s response to its questionnaire. It showed that candidates were asked whether they would commit to cutting the federal prison population by half during their presidency and if they would publish a strategy for making it happen, including at the state and local levels. Ryan said yes to both questions. 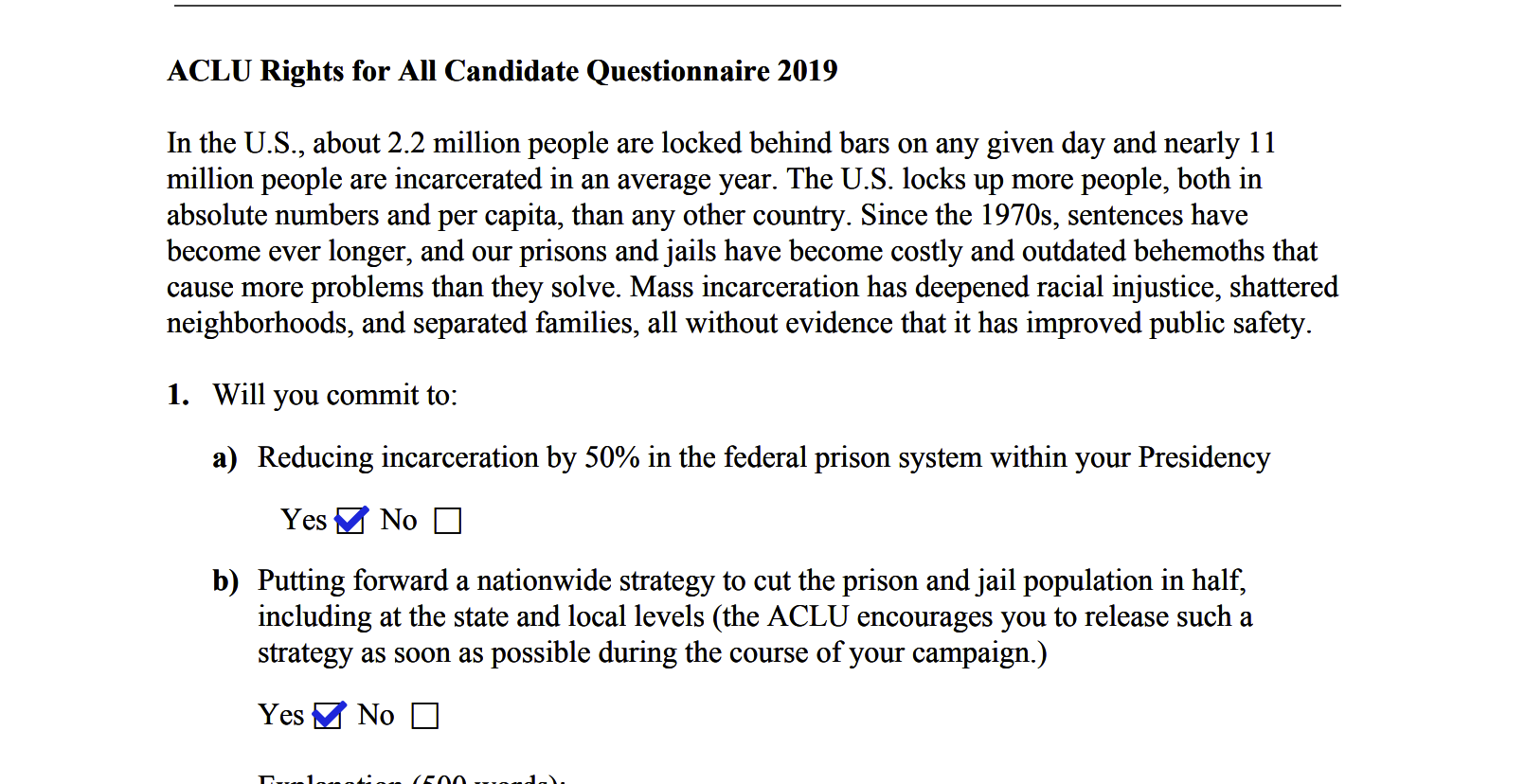 Another question directly addressed the topic of drugs. The ACLU prefaced the question with a discussion of racial disparities in drug arrests and incarceration rates between the Black and white populations. It went on to say "the opioid crisis has reaffirmed the failure of criminalization," and "full decriminalization with appropriate treatment responses could address this stark racial injustice and reduce incarceration."

The ACLU’s question asked, "Since drug use is better addressed as a public health issue (through treatment and other programming), will you support the decriminalization at the federal level of all drug possession for personal use?"

In a September 2019 interview, an ACLU official thanked Ryan for agreeing to the mass incarceration pledge and asked Ryan how he would work toward those goals.

"Yeah, there is a lot we would have to do, and it ties into a lot of other areas," Ryan said "I would personally try to start with marijuana laws and getting marijuana off the schedule." (Under federal law, marijuana has the highest classification under the Controlled Substances Act, Schedule 1, which includes the most dangerous substances, such as heroin.)

When we told the Vance campaign about Ryan’s response in the questionnaire, the campaign said Ryan’s pledge to free half of the U.S. prison population would include offenders in prison for fentanyl trafficking. One 14-second clip shared on Twitter by RNC Research forwarded to us by the Vance campaign shows Ryan being asked about the pledge. Ryan said, "I don’t know if it’s by 50% or not, but we want to get all the nonviolent criminals out."

Drug abuse is a huge issue in Ohio. In 2007, unintentional drug poisoning became the leading cause of injury death in Ohio, surpassing motor vehicle crashes for the first time on record, according to the state health department. This trend continued through 2020. Fentanyl was involved in 81% of overdose deaths in 2020 in Ohio, often in combination with other drugs.

Vance is referring to a pledge to reduce mass incarceration that Ryan signed during his 2019 bid for the Democratic presidential nomination.

Ryan doesn’t say anything about legalizing fentanyl. Ryan actually says the opposite.

Ryan has supported legislation that aims to reduce the flow of fentanyl, both before and after his presidential bid.

RELATED: Tim Ryan on the Truth-O-Meter

RELATED: J.D. Vance on the Truth-O-Meter

Fox News, Vance calls Ryan's pledge to decriminalize 'all drug possession' a 'slap in the face' of victims' families, Oct. 26, 2022