Instagram posts
stated on November 7, 2022 in Instagram post:
Image shows that the New Mexico secretary of state counted more than 17 million registered voters in a state with a population of about 2 million.

Could a state of 2 million people really have 17 million registered voters?

But an image shared out of context on social media suggests the New Mexico secretary of state’s office proclaimed that many people could feasibly vote in the Nov. 8 election.

"Hey Maggie, how and why is your website showing 17 million voters in New Mexico when we only have a population of 2 million?" the Nov. 7 post said, referring to Secretary of State Maggie Toulouse Oliver.

Accompanying the text was a screen grab showing what appeared to be a mobile version of the secretary of state website. The picture captures a web graphic titled "Unofficial Results" for the Nov. 8 election. Under the heading "Statewide Voter Turnout," it shows zero ballots cast with the number of registered voters at "17,284,921."

"This shows issues already within your system and we want answers!" the Instagram post caption continued. "Explain it! This is why we need (Audrey Trujillo) to be the next Secretary of State! #newmexit"

Oliver, a Democrat, is running for re-election against Republican challenger Trujillo. 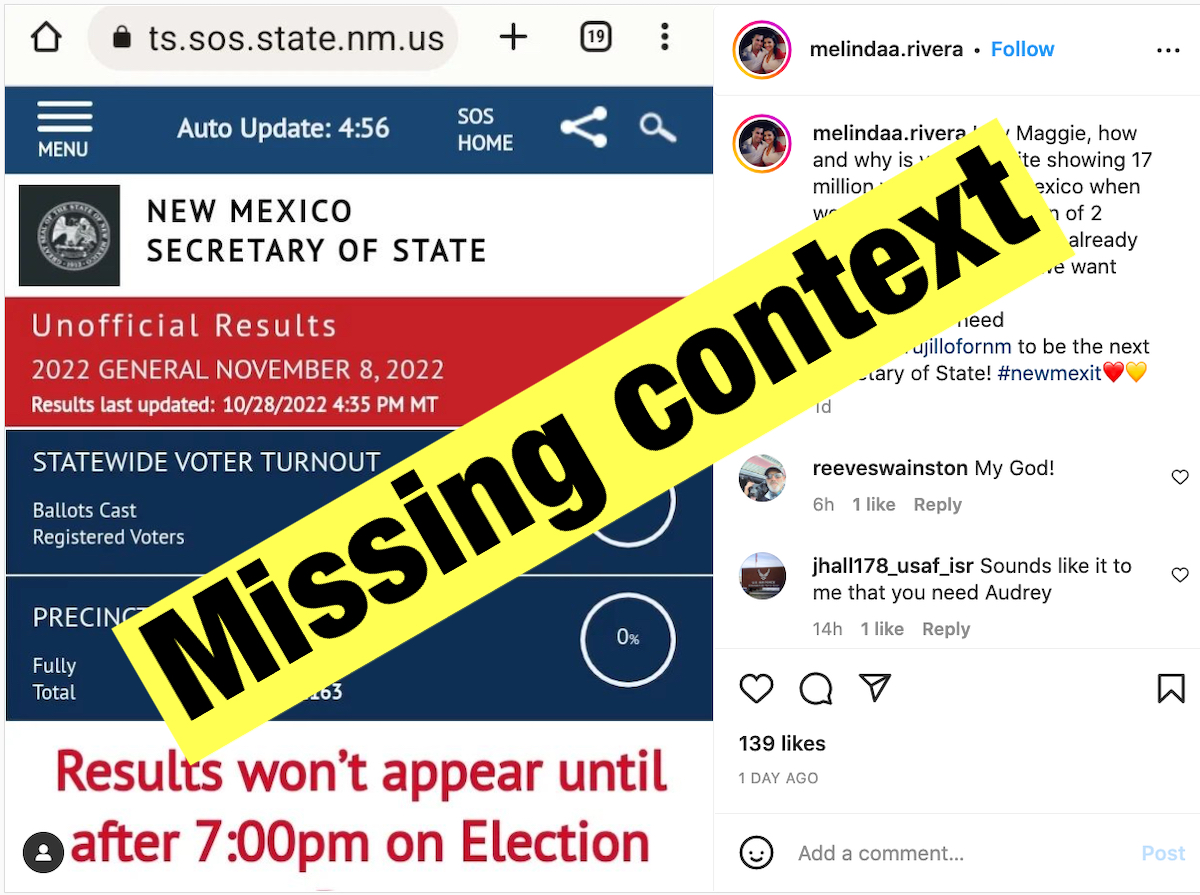 New Mexico has a population of about 2 million, with approximately 1,362,028 registered voters as of Oct. 31. But Alex Curtas, a spokesperson for New Mexico’s secretary of state, said the image being shared on social media was taken while the site was in test mode and was not intended to represent actual data.

In fact, Curtas said, the site had a "Testing in Progress" disclaimer saying so.

"The election night reporting (ENR) website was in test mode and had mock data for the last few weeks as we ran a test election with the county clerks in preparation for (Nov. 8)," Curtas told PolitiFact in an email. "We of course are now finished with that test and the ENR site is now prepped for Election Day and the ‘mock data’ message has been taken down."

An archived version of the webpage from Oct. 21 did show the "17 million" registered voters figure along with "Testing in Progress" written across the site.

Curtas said the stand-in figure remained on the site until the morning of Nov. 6 by mistake but has been updated and now reflects the actual voter registration number in New Mexico, about 1.36 million.

We rate the claim that this image shows the New Mexico secretary of state counted more than 17 million registered voters False.

Instagram posts
stated on November 7, 2022 Instagram post:
Image shows that the New Mexico secretary of state counted more than 17 million registered voters in a state with a population of about 2 million.

Instagram posts
stated on November 4, 2022 post:
A wax figure of Ye was removed from Madame Tussauds museum but a figure of Adolf Hitler remained.

Donald Trump
stated on November 1, 2022 Instagram/Truth Social posts:
“So the Pennsylvania Supreme Court just ruled, in effect, that the 2020 presidential election was rigged.”

Instagram posts
stated on October 28, 2022 Instagram post:
“Freedom of Information Act requests show a dozen phone calls between the cell phone of Ray Epps and the office of Speaker Pelosi in the week before #January6th”

Instagram posts
stated on October 25, 2022 Instagram post:
“If outer space was a vacuum, astronauts would train in vacuum chambers. Not in swimming pools. Outer Space is a hoax.”