Instagram posts
stated on October 25, 2022 in Instagram post:
“If outer space was a vacuum, astronauts would train in vacuum chambers. Not in swimming pools. Outer Space is a hoax.”

Outer space is not real, or at least that’s the claim an Instagram post makes after calling into question long-established training methods for astronauts.

The Oct. 25 post is a collage of three stacked photos showing a digital rendering of space, a NASA vacuum chamber and an astronaut submerged in water.

"If outer space was a vacuum, astronauts would train in vacuum chambers, not in swimming pools," reads text overlaid on the post, which is accompanied by the caption "Outer Space is a hoax."

Implying that vacuum chambers aren’t used in specialized training for astronauts is both misleading and false. Astronauts train inside vacuum chambers as well as underwater in swimming pools, according to NASA. 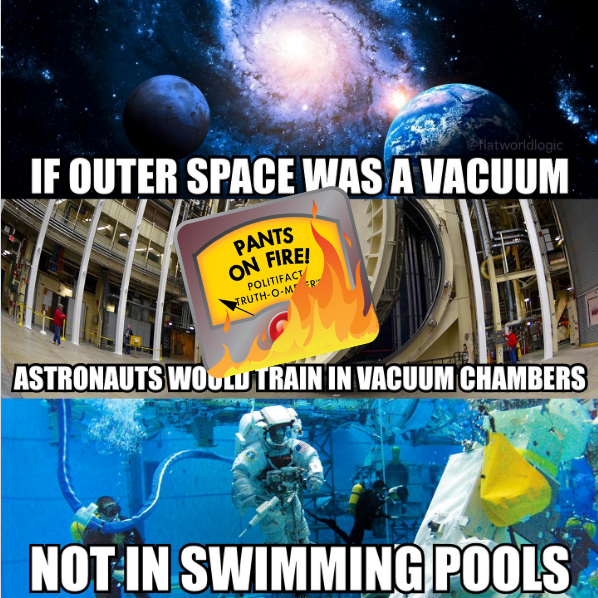 This is evidenced by a video published on the verified YouTube account for NASA’s Johnson Space Center, which serves as the operational homebase for International Space Station missions.

Daniel Huot, a NASA spokesperson, told PolitiFact in a statement that spacesuit-clad astronauts train in vacuum chambers to become better acquainted with how pressure changes in outer space.

"A vacuum is the absence of matter, put very simply the absence of stuff. For outer space, that means there is no atmosphere like we have here on Earth," Huot said.

NASA tests materials, spacesuits and spacecraft in a vacuum environment on Earth, Huot said, "because a lot of important processes change (processes like heat transfer or how things get warmer or colder.)" In space, temperatures are around absolute zero (or about -440 degrees Fahrenheit), according to NASA.

The training that astronauts complete in a swimming pool, meanwhile, is meant to replicate a microgravity environment. NASA said microgravity is "the condition in which people or objects appear to be weightless. … microgravity refers to the condition where gravity seems to be very small."

The Instagram post, Huot says, "demonstrates a misunderstanding of the fundamentals of two separate things: a vacuum and microgravity."

"Humans have known that the Earth is round for more than 2,000 years," a NASA spokesperson previously told PolitiFact. "The ancient Greeks measured shadows during summer solstice and also calculated Earth’s circumference. They used positions of stars and constellations to estimate distances on Earth. They could even see the planet’s round shadow on the moon during a lunar eclipse."

An Instagram post claimed, "If outer space was a vacuum, astronauts would train in vacuum chambers. Not in swimming pools. Outer Space is a hoax."

Astronauts train in both settings. They train in vacuum chambers to understand pressure changes in outer space, and they train in swimming pools to experience a microgravity environment.

Evidence shows outer space is real and Earth is spherical, not flat.

Instagram posts
stated on November 7, 2022 Instagram post:
Image shows that the New Mexico secretary of state counted more than 17 million registered voters in a state with a population of about 2 million.

Instagram posts
stated on November 4, 2022 post:
A wax figure of Ye was removed from Madame Tussauds museum but a figure of Adolf Hitler remained.

Donald Trump
stated on November 1, 2022 Instagram/Truth Social posts:
“So the Pennsylvania Supreme Court just ruled, in effect, that the 2020 presidential election was rigged.”

Instagram posts
stated on October 28, 2022 Instagram post:
“Freedom of Information Act requests show a dozen phone calls between the cell phone of Ray Epps and the office of Speaker Pelosi in the week before #January6th”

Instagram posts
stated on October 25, 2022 Instagram post:
“If outer space was a vacuum, astronauts would train in vacuum chambers. Not in swimming pools. Outer Space is a hoax.”