Qasim Rashid
stated on July 18, 2022 in a tweet:
"North Carolina GOP is re-introducing a bill that says life begins at conception and anyone who destroys that fertilized egg is guilty of first-degree murder."

Liberal activists are sounding the alarm about a North Carolina bill that seeks to outlaw abortion and punish those involved in the procedure.

"North Carolina GOP is reintroducing a bill that says life begins at conception and anyone who destroys that fertilized egg is guilty of first-degree murder," Qasim Rashid, a human rights attorney, said in a July 18 Twitter post. 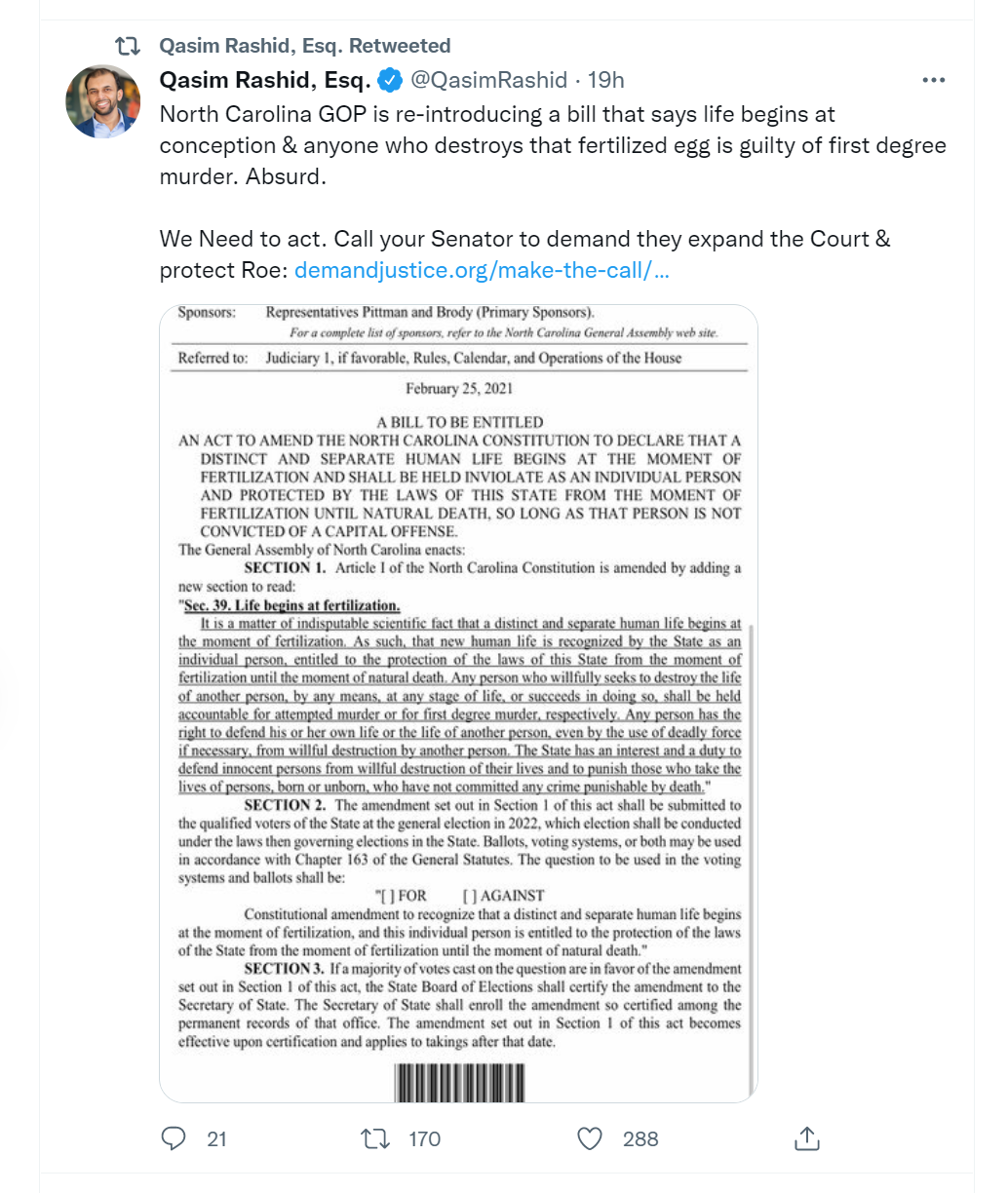 Rashid is a former congressional candidate and has more than 344,000 followers on Twitter. The tweet, which has been deleted, linked to the website of Demand Justice, a progressive group advocating for the expansion of the U.S. Supreme Court.

Particularly for people concerned about abortion rights, the news is alarming. But the tweets are misleading and omit a significant fact: This proposed legislation is more than a year old and died in committee. We found no evidence that it has been reintroduced — the legislature is adjourned — nor did we find any evidence that it’s supported by Republican leaders in the legislature.

The tweets appear to be a reference to a bill known as H158 that’s been filed in North Carolina’s state legislature.

The bill seeks to define life as starting at fertilization — the earliest point in the pregnancy process — and could allow law enforcement to charge people with murder if they’re involved in an abortion. The bill also says people have the right to use deadly force to defend the life of another person, and that the state has an interest to "punish those who take the lives of persons, born or unborn, who have not committed any crime punishable by death."

So, to some degree, the tweets convey some of the bill’s intent. However, Rashid inaccurately described who filed the bill. It wasn’t filed by the "North Carolina GOP," and it wasn’t even supported by a majority of Republicans.

Although the North Carolina Republican Party’s platform says life should be protected "from conception until death" and that the party opposes the destruction of embryos, party spokesman Jeff Moore said the organization "doesn’t craft legislation" and had no involvement in the bill.

"This appears to be purely political gaslighting," Moore said of the tweet’s claim.

The bill was filed by two Republicans, one of whom is Rep. Larry Pittman — a retiring lawmaker who made national news in 2017 when he compared Abraham Lincoln to Adolf Hitler. In a letter filed with the bill, Pittman claims that "it is hoped that if abortion is made illegal, as it always should have been, more people will be more responsible in their sexual habits before producing a new human life unintentionally." Responding to analysis that his bill featured no proposal for implementing its goals, Pittman wrote that "abortion, being an act of murder, should be treated the same as any other instance of murder under existing law."

With Roe v. Wade overturned and multiple states moving to limit abortion, the claim that the bill is being "reintroduced" is perhaps the most misleading part of the tweet.

The bill was filed Feb. 24, 2021. It bounced around three House committees without a vote and the most recent committee referral was that August.

The bill is effectively dead because it made no progress in either chamber and doesn’t meet qualifications for reconsideration that were outlined in the legislature’s adjournment resolution passed July 1, according to Stephen Wiley, caucus director for the North Carolina House Republicans. By the time Mayer and Rashid tweeted, state lawmakers had gone home because the main legislative session was over.

"There are hundreds of bills introduced every biennium that never receive so much as a committee vote, and this is one of them," Wiley said. "Now, with legislators done with [the] short session, out-of-state online activists are bringing this bill up in an obvious attempt to build their fundraising lists."

Republican legislative leaders — House Speaker Tim Moore and Senate Leader Phil Berger — both said last month that they won’t take up abortion bills until next year, when they hope to have a supermajority in both chambers. In a recent interview with WRAL News, Berger said he believes abortion laws should include an exception for rape and incest and that there "likely should be a period of the postconception the mother should have some autonomy in terms of what takes place."

The tweets also ignore an important fact about what would happen if the bill were somehow approved by the legislature.

H158 calls for a constitutional amendment. Proposed constitutional amendments pass only if they receive 60% of the vote in both the House and Senate.Then all proposed amendments to the North Carolina Constitution must be approved by voters through a statewide referendum. The bill would direct the state Board of Elections to place it on the ballot in this year’s November elections. And it’s not a slam dunk at the polls.

Given the procedural and political obstacles, it’s virtually impossible for this bill to pass this year and become law.

After PolitiFact North Carolina contacted Voters of Tomorrow, Mayer deleted a tweet attached to the original claim that sought donations to his group.

In an email statement provided to PolitiFact through Voters of Tomorrow, Mayer said: "While this bill was introduced earlier than I realized, our focus should be on how this bill would put people at risk of being murdered by the state for exercising control over their own bodies." Mayer also tweeted an acknowledgement that the bill "has been stuck in committee for a bit."

Rashid said "North Carolina GOP is reintroducing a bill that says life begins at conception and anyone who destroys that fertilized egg is guilty of first degree murder."

The claim captures some of the bill’s intentions, but falsely says it was "reintroduced" by the "North Carolina GOP" and ignores key details about the bill’s status and potential for becoming law.

We rate it Mostly False.