A viral image has been circulating on social media purporting to show a newsletter from The Atlantic praising President Joe Biden for his "quiet courage" following news that the United States’ economy shrank for the second straight financial quarter.

A Facebook user posted a screenshot on July 30 of what appeared to be the magazine’s website featuring the headline "The Quiet Courage of Biden’s Negative Growth Economy."

"In an era of unchecked economic prosperity, one man had the moxie to pump the brakes – to save us from ourselves," read the subheadline as it appeared in the post. The screenshot made it look as if a story was written by someone named Tim Nichols and had appeared in the magazine's email newsletter, "The Atlantic Daily".

The post, which was also being shared elsewhere, was flagged as part of Facebook’s efforts to combat false news and misinformation on its News Feed. (Read more about our partnership with Facebook.)

The image is fake. 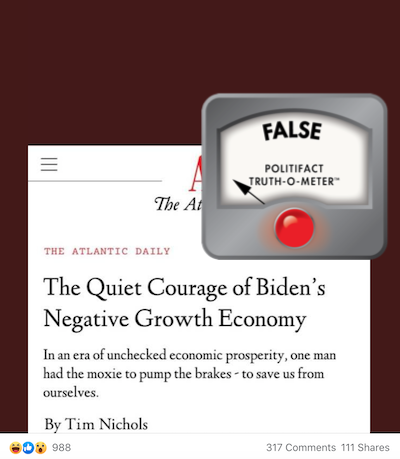 (Screengrab from Facebook.)
No such article or newsletter with the headline featured in the screenshot appears on The Atlantic’s website. A Google search also turns up zero results of articles with the same headline — and shows only stories about the misleading image itself.
The Atlantic does have one article with a similar headline that reads "The Quiet Courage of Bob Moses," but it was written in 2021 by William Sturkey about a Black civil rights activist.
"This image is indeed fabricated, and is not an actual Atlantic article," Anna Bross, senior vice president of communications for The Atlantic, said. "We have reported this as fake and as a trademark infringement."
Bross said the magazine doesn’t employ anyone named Tim Nichols. However, someone named Tom Nichols does work for The Atlantic as a contributing writer and authors the "Peacefield" newsletter.
The lowercase "i" in Tim featured in the screenshot also appears to be in a different font from the rest of the name, suggesting that it may have been changed from an "o" to an "i."
Our ruling

A Facebook post shared a fabricated screenshot meant to look like a real article from The Atlantic praising President Biden following news that the United States economy had shrunk.

A spokesperson for The Atlantic confirmed the image is a fake and said the publication does not employ anyone using the name featured in the screenshot, although a person with a similar name is employed as a contributing writer.

Facebook posts
stated on September 28, 2022 a video:
“The Russian army has surrendered in Donetsk!”

Instagram posts
stated on September 26, 2022 a video:
Video shows “Italians take down an EU flag and replace it with an Italian flag” after the 2022 national election.

Facebook posts
stated on September 14, 2022 a video:
“Future and Malia Obama are expecting first child together.”

Facebook posts
stated on September 21, 2022 a post:
“Barron Trump has been kicked out of school for fees.”

Instagram posts
stated on September 16, 2022 a video on Instagram:
Video shows an "invasion of crocodiles" that has flooded the beaches of Brazil and caused residents to panic.

Facebook posts
stated on September 10, 2022 a video:
“Trump lawyers all quit on him at the same time.”

Instagram posts
stated on August 27, 2022 an Instagram video:
There’s an unlimited supply of water being generated “deep within the Earth.”

Facebook posts
stated on August 19, 2022 a Facebook post:
The deaths of U.S. Rep. Jackie Walorski, R-Ind., and actor Anne Heche are suspicious and linked because they “partnered fighting against pedophilia.”