The refurbished George Floyd statue in Brooklyn is unveiled after it was vandalized following its Juneteenth installation, Thursday, July 22, 2021 (AP Photo/Bebeto Matthews)

As memorials to George Floyd are being erected in American cities, so too are social media claims surrounding his past, including one stating that Floyd was involved in multiple violent crimes.

The July 18 Facebook post is a screenshot of a tweet from former New York City Police Commissioner Bernard Kerik. It includes a photo of a statue of Floyd being unveiled in Brooklyn, N.Y., on Juneteenth, a celebration of the end of slavery. Alongside the picture is a statement: "I wonder if the statue has a plaque listing all his good deeds and his contributions to society." The statement then follows with a list that includes "3 car thefts" and "23 arrests".

Kerik added in his tweet, "WTF is wrong with our country?"

Floyd was killed in Minneapolis in May 2020 by a police officer who pressed his knee on Floyd’s neck for several minutes during an attempted arrest. His death sparked nationwide protests against police abuses and galvanized a movement for racial justice. The officer, Derek Chauvin, was convicted of murder this year.

Floyd had a criminal history, but the claims in the Facebook post exaggerate or completely fabricate elements of that record, court documents show.

Attorney Jennifer Lammers, who represents Floyd’s estate, and Floyd family attorney Ben Crump didn’t respond to our requests for comment. PolitiFact also reached out to Kerik regarding his tweet. Neither he nor his team responded to a request for comment.

Here is a look at what the post says about Floyd’s criminal background, and what court documents and news reports say.

According to reports from The Washington Post and the Houston Chronicle that detail Floyd’s life, he and his family moved from North Carolina to Houston when he was a young child, and he spent most of his life there. He was arrested nine times there, according to public records accessible in the Office of the Harris County Clerk’s database — not 23 times as the claim states. 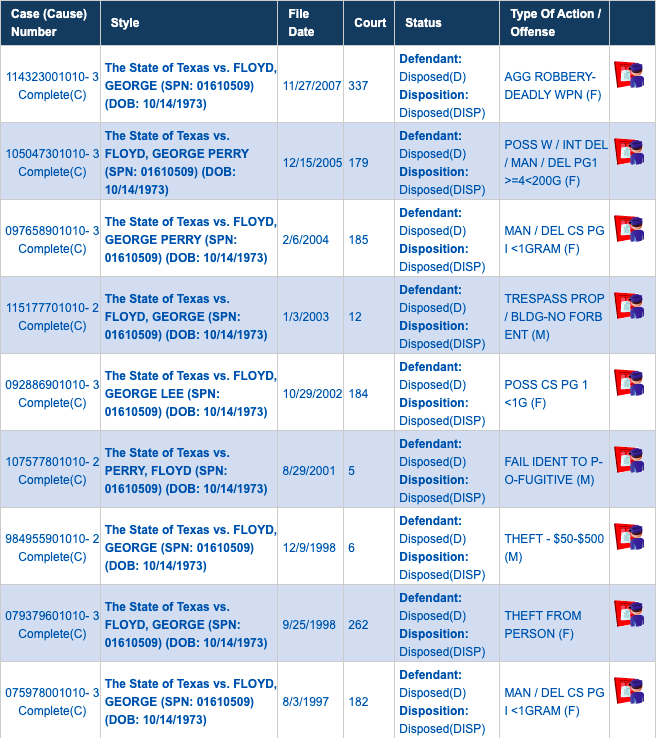 Floyd was arrested twice for theft charges: One was a theft of $50 to $500, and the other is listed as a "theft from person," which was a part of a plea deal to lessen the charge from aggravated robbery. Neither case’s charging documents state that a car was stolen.

Floyd was arrested again in 2007, this time for an aggravated robbery in which he and five other men broke into the apartment of a woman named Aracely Henriquez to find drugs and money, according to court documents. PolitiFact previously reported on a similar claim that involved this case: Floyd pushed a pistol against Henriquez’s abdomen before searching her house. There is no evidence in court documents that she was pregnant, as the Facebook post claims. Court records list only this home invasion charge.

Other charges listed in the claim

Floyd was arrested once for illegal trespass on the property of another person. Another unrelated charge was for failure to identify himself to a police officer. We found no evidence in court documents that Floyd beat four people.

Four of Floyd’s nine arrests were for drug possession or distribution of cocaine.

Floyd dealt with a years-long drug addiction. He took part in a 90-day rehabilitation program in Minneapolis in 2017, according to a report in the Minneapolis Star-Tribune.

Body-camera video of the incident was released publicly as evidence during Chauvin’s murder trial. Floyd’s girlfriend Courtney Ross testified in court about their addictions to opiates.

Minnesota court records show that Floyd was involved in other traffic violations while in Minneapolis, including not having his driver’s license on hand during a stop. These did not involve arrests. In one case, the court ordered him to do two days of community service.

As for the nine Harris County criminal charges, Floyd pleaded guilty to seven of them, including a majority of the drug charges, the aggravated robbery and one theft charge. He pleaded no contest to two others. In total, Floyd served eight years and nearly eight months in state jail, county jail and prison for his actions.

Court documents show that Floyd was arrested nine times for charges including four charges of drug possession and distribution, two theft charges, one illegal trespass, one charge of failure to identify to a police officer and one aggravated robbery.

The claim overstates the number and severity of these charges and includes crimes Floyd wasn’t charged with, including beating four victims and three car thefts. Court documents and reports contain no evidence of such charges.

PolitiFact, Evidence shows George Floyd’s death was not the result of a fentanyl overdose, July 8, 2021

Copy of Order for Case Amendment from the State of Minnesota, County of Hennepin, Dec. 19, 2019

Tweets
stated on May 14, 2022 Twitter posts:
The mass shooting in Buffalo, New York was a “false flag event.”

Facebook posts
stated on May 3, 2022 a Facebook post:
An adenovirus is a combination of viruses, gastrointestinal virus, pneumonia and COVID-19 mixed together to “kill our children.”

Bloggers
stated on February 21, 2022 in a blog post:
Joe Biden was holding a medical device in a photo he tweeted during the 2022 Winter Olympics.