Billboard
stated on February 13, 2021 in a billboard:
“Gov Roy Cooper does not consider Type 1 diabetes an under lying health issue!”

A WRAL viewer emailed a photo of the billboard on U.S. Highway 301 to PolitiFact. It says:

"Gov Roy Cooper does not consider Type 1 diabetes an under lying health issue! Think about that!" 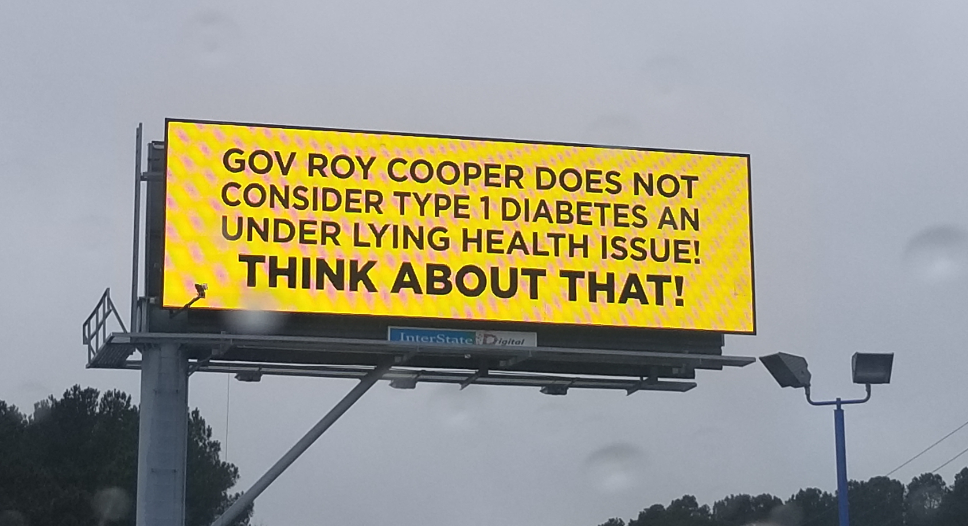 The billboard does not show who paid for it. Warren Stancil, the president of the billboard company, InterState Outdoor Inc., said he doesn’t know the buyer’s identity.

"This was an anonymous person who bought the ad space. All I know is what’s in the message," Stancil said in an email. The ad went up around Jan. 22, he said.

Given the timing of the message in the midst of a vaccine rollout, we’re assuming for the purposes of this check that the messenger is likely referring to where diabetics fall in North Carolina’s inoculation schedule.

The billboard’s message touches on a controversial subject. To date, the U.S. Centers for Disease Control and Prevention does not consider both types of diabetes to carry the same level of risk for COVID-19 complications. In North Carolina, meanwhile, the health department has grouped Type 1 and Type 2 diabetes together and people with either condition qualify for covid vaccines in Group 4, ahead of the general population.

Under current CDC recommendations, people with Type 1 diabetes would be vaccinated with the general population.

Advocacy groups such as the American Diabetes Association and JDRF (formerly known as the Juvenile Diabetes Research Foundation) are lobbying the CDC to place higher priority on people with Type 1 diabetes.

A study published in December found that Type 1 diabetes "independently increases the adverse impacts of COVID-19," while another recent study found that Black COVID-19 patients were more likely to develop a serious complication of Type 1 diabetes than white patients.

Still, JDRF spokeswoman Cynthia Rice said that, as a result of the CDC’s recommendations, "many states" haven’t prioritized people with Type 1 diabetes. So the American Diabetes Association has been contacting governors and state agencies across the country, spokeswoman Daisy Diaz told PolitiFact.

In North Carolina, the health department currently considers both types of diabetes to be "chronic conditions." Where does that put diabetics in North Carolina’s vaccine rollout?

Let’s say someone has diabetes but isn’t over age 65, doesn’t work in an essential industry and doesn’t meet any other criteria for moving up North Carolina’s vaccine priority list.

That person would be in Group 4 of the state’s five groups:

Asked about North Carolina’s plan, Rice said: "That is the policy we are seeking around the country, with Type 1 included with other disease that increase risk of severe illness from COVID."

While people with both types of diabetes are prioritized in North Carolina, old versions of the health department’s website may have given people the wrong impression.

Take for example the department’s FAQ page about COVID-19 vaccines. Under the "getting vaccinated" section, the department lists chronic conditions that make someone a higher priority for vaccination.

The page currently lists both types of diabetes as chronic conditions.

However, according to an internet archive, the page excluded Type 1 diabetes from its list of chronic conditions as recently as Feb. 12. The webpage quoted CDC guidance, mentioning only Type 2 diabetes as a chronic condition.

That exclusion may be why some media outlets have mentioned only Type 2 diabetes when reporting on North Carolina’s rollout.

North Carolina has tried to follow most CDC recommendations, said SarahLewis Peel, a spokeswoman for the health department. However, Peel said, North Carolina has always intended to prioritize all diabetics for vaccines.

People with both types of diabetes have been prioritized together since the state released its guidance for Group 4 on Jan. 25, she said.

The billboard says "Cooper does not consider Type 1 diabetes an (underlying) health issue!"

North Carolina’s vaccine rollout prioritizes people with type 1 diabetes ahead of the general population. So it’s clear that Cooper, to some degree, considers the disease to be an underlying health issue.

Story by StatNews, "People with type 1 diabetes have a higher risk of dying from Covid-19. Why are they lower on CDC’s vaccine priority list?" posted Jan. 11, 2021.

Pages on the U.S. Centers for Disease Control and Prevention website, "COVID-19 and people with certain medical conditions," and "The Advisory Committee on Immunization Practices’ updated interim recommendation for allocation of COVID-19 vaccine."

Study, "COVID-19 Severity Is Tripled in the Diabetes Community: A Prospective Analysis of the Pandemic's Impact in Type 1 and Type 2 Diabetes," published online by the National Library of Medicine on Dec. 2, 2020.

Study, "Inequities in Diabetic Ketoacidosis Among Patients With Type 1 Diabetes and COVID-19: Data From 52 US Clinical Centers," published online in the Journal of Clinical Endocrinology & Metabolism on Dec. 19, 2020.

Story by WECT, "NCDHHS announces those 65 and older are eligible for vaccinations," posted Jan. 14, 2021.